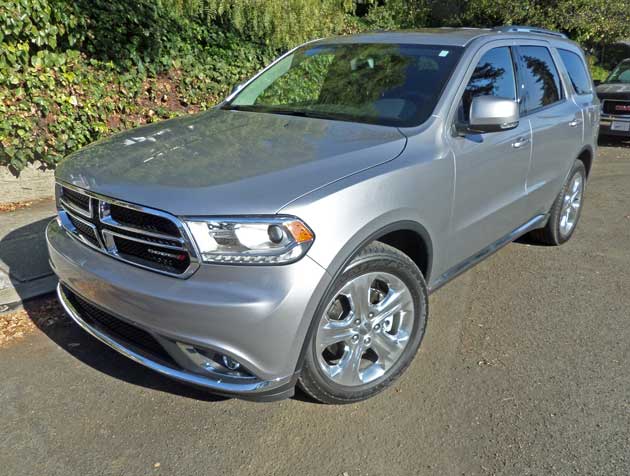 The 2014 Dodge Durango is throwing down the gauntlet in the rapidly increasing full-size SUV and crossover marketplace. It is built on the Dodge brand?s foundation of performance, style and innovation. The first Durango appeared in 1998 and following a hiatus, was reintroduced in 2011, combining sleek, muscular lines, comfortable three-row seating, large cargo volume, class-leading power, driving range and towing capability and overall driving pleasure unlike anything seen before in the SUV segment.

The new 2014 Dodge Durango has taken everything that customers relished about Durango and added the latest advancements in technology, enhancing its design, capability and functionality, while managing to maintain the 2013 starting price. With a new standard eight-speed automatic transmission, improved fuel economy (as much as 15 percent) and performance levels, new LED exterior lighting, two new interior touchscreens, a new programmable instrument cluster and an available high-definition dual-screen Blu-ray entertainment system, the new Durango achieves higher levels of sophistication, building on its existing attributes. The new Durango truly represents the ultimate no-compromise full-size SUV.
The Chrysler Group?s Uconnect Access, easy-to-use touchscreen technologies and the Dodge brand?s signature racetrack LED tail lamps all contribute to the satisfaction of driving enthusiasts in the market for a three-row family performance SUV.

The new 2014 Dodge Durango will be available in five levels of trim with two engine variants, RWD and AWD drive configurations. The model range consists of: SXT; Rallye; a new for 2014 Limited; R/T; and Citadel. The starting MSRP is $29,795 exclusive of a $995 Destination charge. 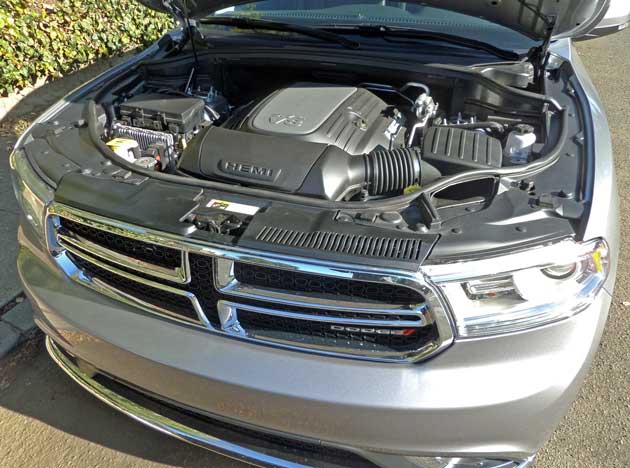 Engine choices include: a Pentastar 3.6-liter DOHC V6 that delivers 290 horsepower and 260 pound feet of torque; and a 5.7-liter OHV HEMI V8 that produces 360 horses along with 390 pound feet of torque ? good for towing up to 7,400 pounds. Both engines will deliver motive force to either the rear wheels (RWD) or to all four (AWD) via anew 8-speed automatic overdrive tramnsmission. The AWD versions use two specific Transfer cases for each of the engines.

The goal of the Dodge Design team was to create a new exterior that conveyed the advancement of the Durango, while maintaining the muscular body expected from Dodge customers.

The Durango?s new face is still distinctly Dodge, but featureing a new, slimmer ?split crosshair? grille with mesh textures unique to each trim level. Combined with the redesigned projector-beam headlamps and a raised front bumper, the new Durango has an even more sinister look than previous models. Durango?s sculpted hood and grille complete the unique Dodge forward-leaning profile that continues through the deeply browed headlamps.?For a more monochromatic appearance, the Rallye and R/T are equipped with dark-tinted headlamp bezels, body-color front and rear lower fascias, wheel flares, grille and sill moldings, all unique to the these packages. The R/T?s ride height has been lowered by ?20 mm, enhancing its aggressive appearance and driving dynamics. Durango now features projector beam headlamps, with LED daytime running lamps on Rallye, Limited, RT and Citadel. The LED lamps run horizontally along the bottom edge of the headlamp, forming a unique ?hockey-stick? shape. Bi-xenon high-intensity discharge (HID) headlamps are standard on R/T and Citadel. ?Auto-leveling technology adjusts headlight beam aim for slight changes in elevation.

The new front-end design features projector fog lamps and fog lamp surrounds and matching crosshair grille texture. Combined with the taller front bumper, the new lower fascia gives the 2014 Dodge Durango a wider and more athletic image.
The side profile of the Durango maintains its powerful shape, accented by muscular fender arches and curves that flow back in through the doors, resembling an iconic Coke bottle shape. The Durango?s new greenhouse blends harmoniously into the body, and a body-color rear spoiler functionally reduces drag. 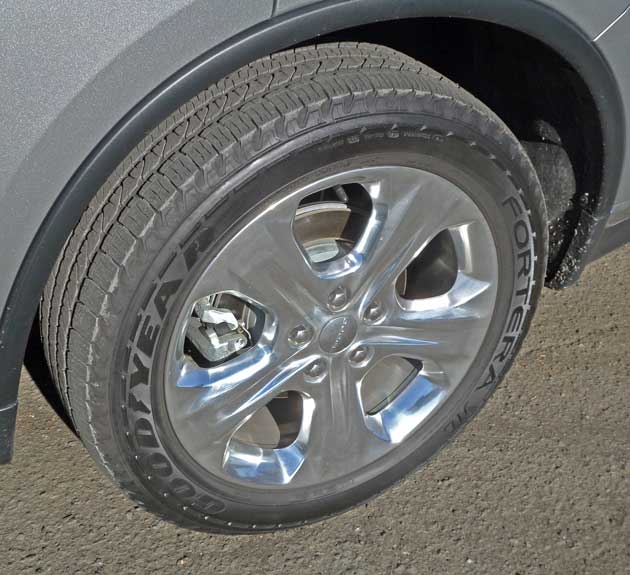 The rear of the Durango adds a dramatic LED ?racetrack? tail lamp design with 192 LEDs, inspired by the Dodge Charger and Dart. The effect is one seamless looking ribbon of light. The rear fascia has been re-sculpted, fully integrating the trailer hitch, giving the Durango a cleaner, more premium look. Large 3.5-inch dual exhaust tips are standard on V-8-equipped vehicles, including the R/T, along with the Rallye; other V-6 powered Durango models feature a ?3-inch single tip. 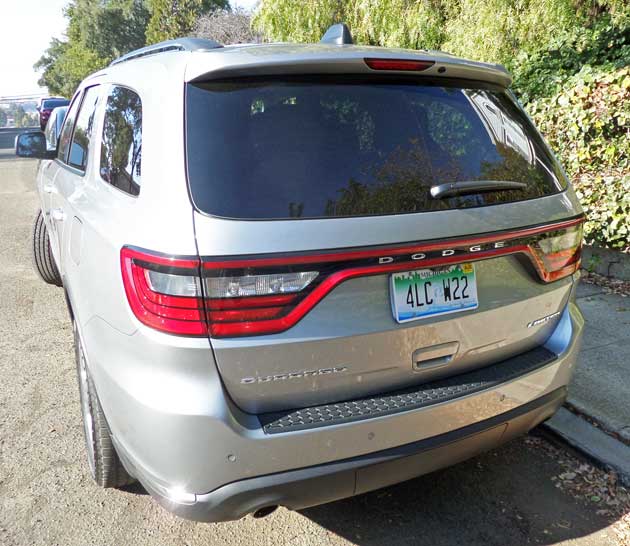 SUMMARY: The 2014 Dodge Durango Limited really makes no compromises, even in the RWD configuration, and if you?re not intending to seriously journey off-road under challenging conditions, RWD is all you really need.
The 5.7-liter HEMI V8 features a new Eco mode which optimizes the new 8-speed transmission?s shift schedule and throttle sensitivity as well as employing Fuel Saver Technology with cylinder deactivation. The Technology also manages interactive deceleration fuel shut-off when coasting. 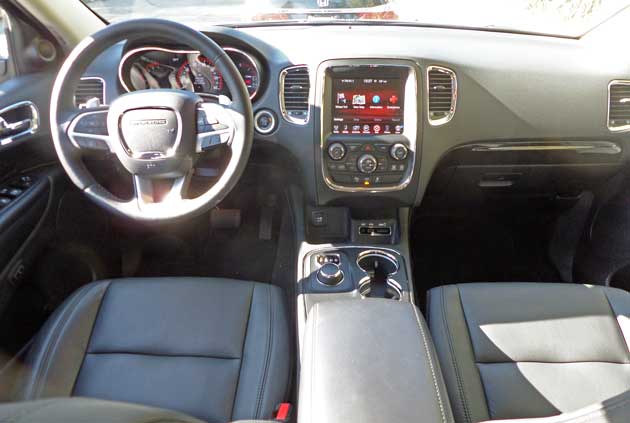 The rotary knob shifter, in addition to being unique, is easy and intuitive to use. Acceleration is brisk on demand when nailingthe throttle, while smooth and refined when in cylinder deactivation ? operation is seamless.?The ride quality is civilized and quite comfortable, and the handling through the rack and pinion steering is spot on. The new Durango holds the road well, with surprising stability, considering its overall mass.

The new Dodge Durango displays a most stylish look with an aggressive stance. It is now considerably more attractive than ever before, especially with its new Grille and taillamp designs. Safety and security features abound, with more than 60 delivering confidence and peace of mind while protecting vehicle occupants. With all of its build combinations, the new Durango seems to have something for everyone who?s shopping for a full sized SUV with three seating rows.
The 2014 Dodge Durango is built in the United States at the Chrysler Group?s Jefferson North Assembly Plant. 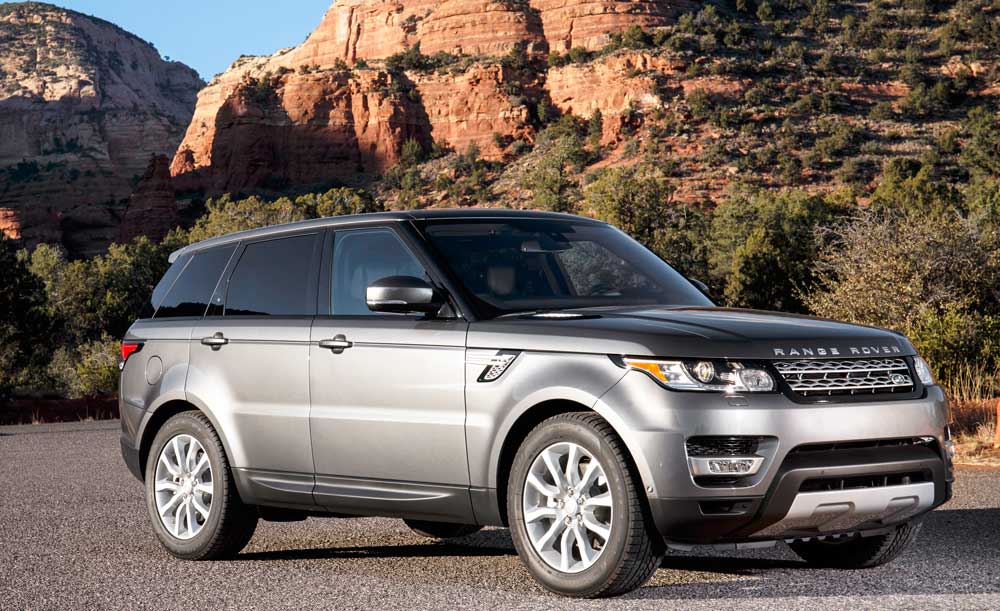