?2014 Chevrolet SS Sedan: Thunder from down under? 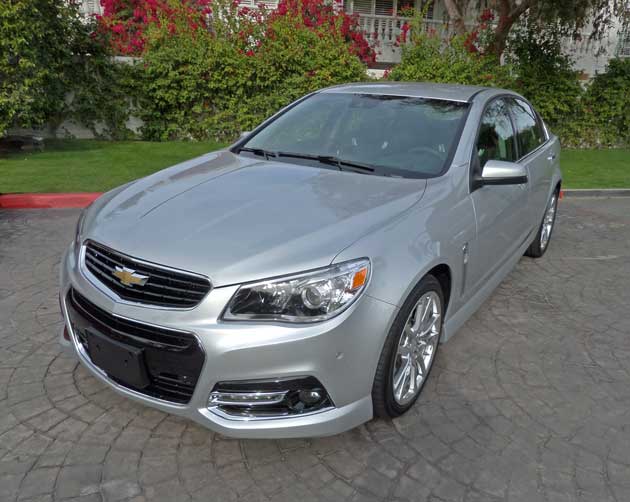 Palm Springs, CA – It?s been 17 years since Chevrolet last graced U.S. showrooms with a V-8-powered, Rear-Wheel Drive high performance sedan. A long wait indeed, but from our initial impressions, the wait proves to have been well worth it. The 2014 Chevrolet SS sedan is a?high performance five-passenger vehicle based on the global architecture of the new, award-winning Holden VF Commodore, which is also the foundation for the Camaro, and the Caprice Police Patrol Vehicle. The SS is built in Elizabeth, South Australia at the Holden facility, Chevrolet?s Australian partner.

The 2014 Chevrolet SS sedan?s thunder is truly from ?down under?, with the resplendent thunderous notes coming both from under the hood and from the exhaust. The ?SS? designation has questionably appeared on several vehicles in past years, most of which were not really appropriate candidates to display the iconic SS badge. The new 2014 Chevy SS Sedan is definitely worthy of holding such a title, and is destined to do so proudly, being the first model to earn the SS name outright. It might not even be out of line to refer to the Chevrolet SS as a four-door cousin of the Camaro SS. The Chevy SS served as the official pace car for the 2013 Daytona 500, NASCAR?S season opener. Jimmie Johnson won his sixth NASCAR championship in a car based on the Chevy SS. 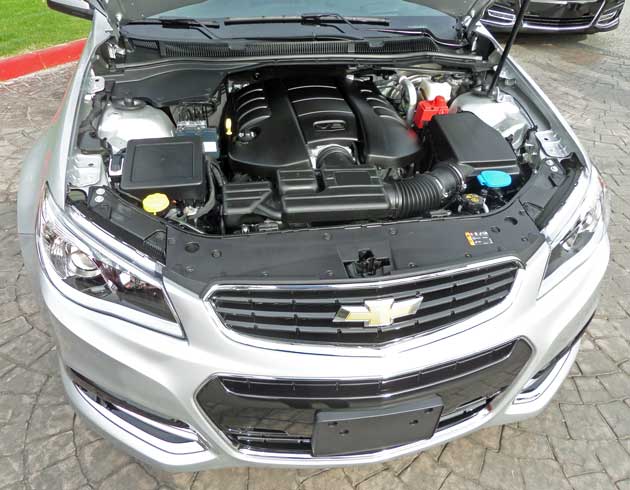 The 2014 Chevrolet? SS sedan gets its muscle from a potent 6.2-liter, L S3, OHV, 16-valve sequentially fuel injected V-8 that pumps out 415 horses at 5,900 rpm along with 415 pound feet of torque at 4,600 rpm. The longitudinally mounted engine gears its motive energy to the rear wheels through a Hydra-Matic 6L80 six-speed automatic transmission with TAPShfft steering wheel mounted paddles for manual shifting, while rolling on staggered high performance Bridgestone Potenza tires – 245/40 ZR19 up front? and 275/35? ZR19 in the rear, mounted on 19×8.5? front and 19×9? rear – 5-?V?-spoke chrome clad forged aluminum alloy wheels. 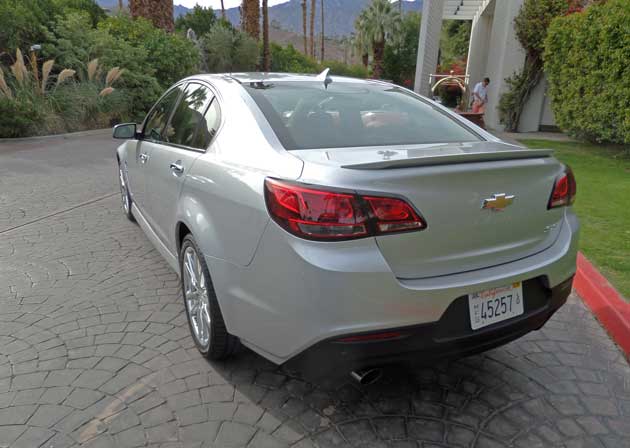 The Chevy SS?s suspension componentry consists of: forward Multi-link MacPherson struts with a direct-acting stabilizer bar; progressive-rate coil springs; and fully adjustable camber, caster and toe. Out back is a four-link independent setup with progressive-rate coil springs over the shocks, a stabilizer bar and fully adjustable camber and toe. The final-drive ratio is an aggressive 3.27, capable of accelerating the car from 0 to 60 mph in roughly five seconds ? counting it in as one of the quickest sedans on the market. The Chevrolet SS also features a sport-tuned chassis, including: The front and rear suspension geometry; and an optimized variable assist electronic power steering system for sporty driving? characteristics. Handling attributes? are optimized by a nearly 50/50 weight distribution front to rear and a low center of gravity ?made possible in part by the aluminum hood and rear deck lid that are 30 percent lighter than traditional steel panels.

Reining in the powerful SS sedan and bringing it to a halt are power-assisted four-wheel disc brakes with standard Brembo front brakes, featuring ventilated, 14-inch, two-piece rotors and four-piston calipers. ABS, EBD and StabiliTrak are standard. 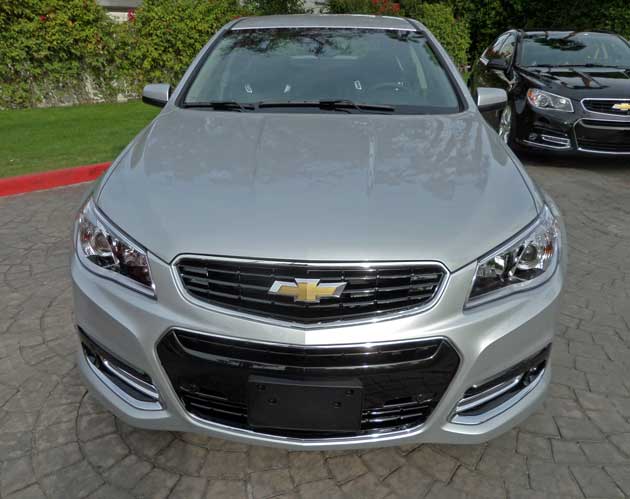 In terms of the 2014 Chevy SS sedan’s heightened visual appeal, performance cues and premium details make for a harmonious blend. Staggered front and rear wheels are pushed out to the corners, enhancing the sporting, muscular stance. Up front, the aluminum hood features a subtle ?power bulge? hinting at the capability of the engine down under. 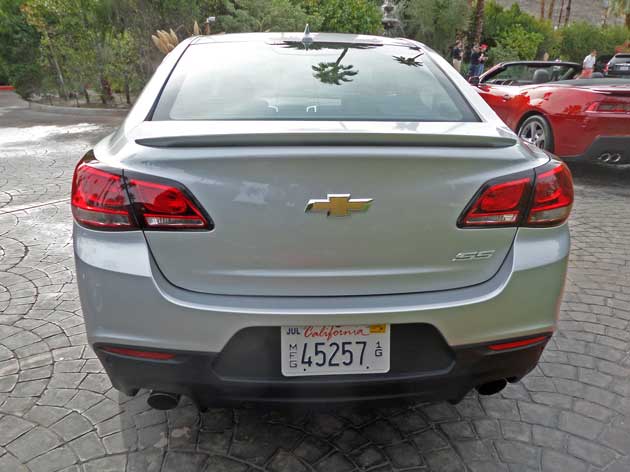 A character line appears along the vehicle?s sides, from the hood to the trunk lid, helping to create a classic wedge shape by further accentuating the planted appearance and muscular sheet metal. The vehicle tapers at the rear, for a tear-drop effect with the C-pillar flowing into the deck lid ? a design cue shared with other Chevrolet sedans. Bright dual-exhaust tips put an exclamation mark on the rear design, while delivering the throaty note performance enthusiasts expect from their vehicle. The SS is offered in five exterior colors: Silver Ice Metallic, Red Hot 2, Phantom Black, Heron White and Mystic Green Metallic. 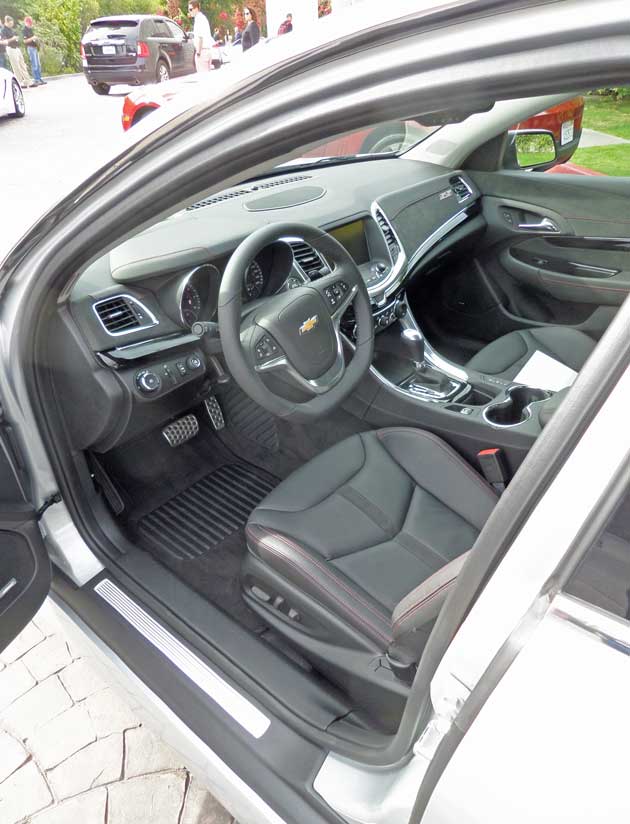 The interior of the SS is offered exclusively in black, with an optional power sunroof available. The spacious cabin will comfortably accommodate five adults, with 42.3 inches of front legroom and 39.7 of rear legroom. Leather seating surfaces are standard, as well as eight-way power adjustable front bucket seats with additional side bolstering that provide support for both the driver and front passenger during spirited driving maneuvers. The SS emblem is prominently stitched onto the soft-touch instrument panel, which features either a satin gloss chrome finish, or a and bright chrome finish. The interior is illuminated at night, by ice-blue ambient lighting.

An integrated center stack includes infotainment, climate and other vehicle controls, while the center console of the SS houses extra-large dual cup holders that capable of accommodating a wide range of container sizes. The cup holders may also be used for small item storage. There are also fold-out rear cup holders located at the base of the center rear seating position. All four doors contain cup holders, while an electric park brake frees up additional space in the center console. Two auxiliary power outlets allow for the concurrent charging of items such as mobile phones, tablets and portable satellite navigation devices. One is located inside the covered central storage console, with the other outlet conveniently accessible in the forward compartment at the base of the instrument panel, which is illuminated at night by ambient Ice Blue lighting.

In addition to a host of standard safety features and equipment such as: Forward Collision Alert; Lane Departuyre Warning; Side Blind zone alert; Rear Cross Traffic ASlert; Rear Vision Camera eight air abgs; and GM?s OnStar. The SS is also the first Chevrolet to offer Automatic Parking Assist, which provides hands-free parking help. This standard feature utilizes an ultrasonic sensing system to detect the width and depth of either parallel or reverse right-angle parking spaces, and while the driver controls the throttle, transmission and brake, the Automatic Parking Assist controls the steering inputs necessary to park the vehicle.?

During the national press launch of the 2014 Chevy SS, my driving partner and I test drove a pre-volume production example with the exterior finished in Silver Ice metallic. The base price was set at $43,475 while the final count and amount came to $45,770 after adding the Gas Guzzler Tax and Destination charge. There are only two available options: a sunroof priced at $900 and a full size spare tire and wheel for $500.

SUMMARY: Even at the first glance, it?s immediately apparent that the 2014 Chevrolet SS sedan is not your ordinary ?run-of-the-mill? Bowtie sedan. And that?s when it?s parked. Fire up the throaty 6.2-liter LS3 OHV V8 engine, and the SS commands one?s instant attention. Corvette owners take note at stop lights, wondering what mysterious new craft this is from Chevrolet that can accommodate up to five with gear, and still give them a run for their money. The SS doesn?t have quite as much horsepower and torque as later ?Vettes, and it may not be quite as fast, but it certainly looks good and it hauls the mail with gusto ? certainly more than any other late model Chevy sedan. 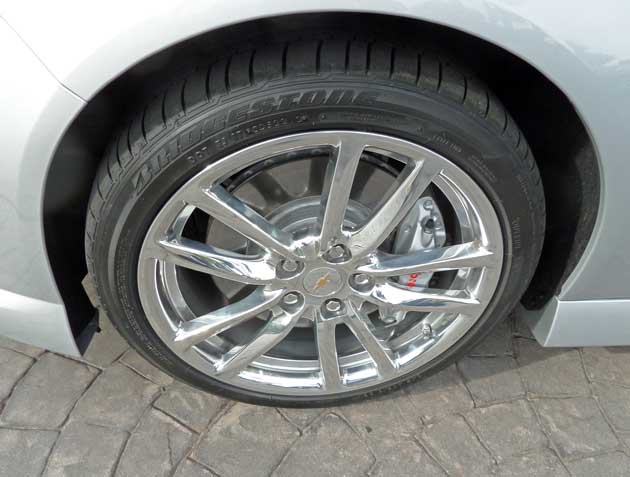 The road manners of the SS are admirable to be sure, as it handles tight, twisty mountain road scenarios delivering reassuring and confidence building stability, with virtually no noticeable body roll. It is tight and planted. The variable assist electric power steering is spot on with a centered feel, delivering crisp and nimble directional response. The ride quality is firm for the sake of agility, but it?s also compliant when it needs to be, never giving up comfort.

The visual impact of the new Chevy SS delivers the elegance and sporting attitude of a well crafted European Sports sedan, without the lofty price tag. In fact, it may well be the best bang for one?s buck to be had in the full size sedan marketplace, bumping many of its competitive set aside in terms of superior performance. The interior fit and finish, with attention to detail and textured surfaces definitely moves Chevrolet up the interior quality ladder. 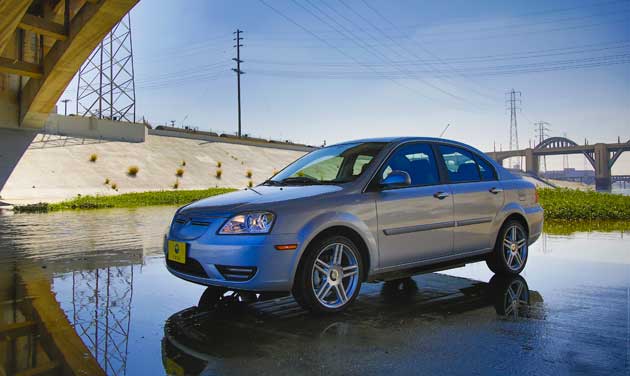