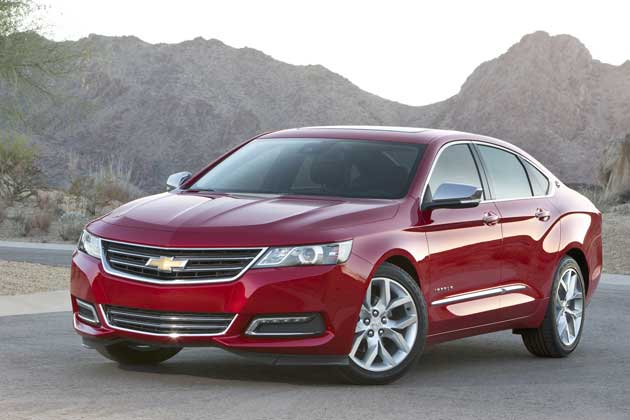 San Diego — One of the longest lasting and iconic names in U.S. automotive history has been pinned to one of the best cars ever produced by the General Motors bow tie division, the 2014 Chevrolet Impala.

Certainly, every new model is expected to ?best? the previous generations, but in the case of the Impala, it?s a major leap forward moving it ahead of the competition, too. That?s not something recent generations of Impala have been able to claim.

After spending a few hours in the new Impala at the recent San Diego press introduction I found that, for me, the Impala?s success comes from several levels including styling, comfort, performance and technology. 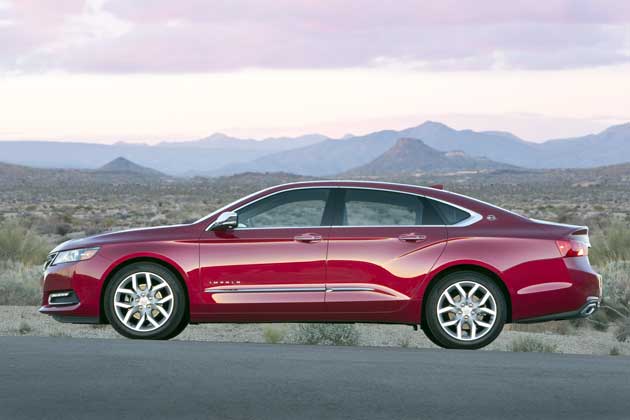 Recent generations of Impala haven?t won awards for styling, but this new one might. The design is crisp and fresh. I especially like the wide stance of the front end, the simple horizontal grille, dressed up with the iconic bow tie logo. The HID headlights are slim and simple and the upper level LTZ version gets a row of LED daytime running lights to distinguish it from the other trim levels. The sides have strong accents with crisp lines that convey a feeling of motion. The Impala looks good in photos and even better in person. 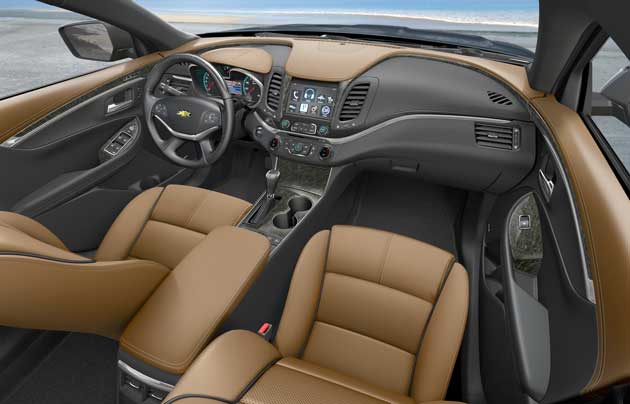 With its low coefficient of drag (0.296 CD for the four-cylinder version), noise-reducing acoustic laminated glass, triple-sealed doors and other acoustic techniques the 2014 Chevrolet Impala is remarkably quiet. The four-cylinder versions even have an Active Noise Cancellations system that eliminates any unwanted engine noise in the cabin.

The 2014 Chevrolet Impala is offered in five trim levels: LS, 1LT, 2LT, 1LTZ and 2LTZ. As the Impala goes on sale, the standard engine in all models is a 195-hp Ecotec? four cylinder. The LT and LTZ versions have an available 305-hp 3.6-liter V-6 option. Both engines drive the front wheels through a six-speed automatic transmission.

The four-cylinder engine has an EPA rating of 21 mpg city and 31 mpg highway. The V-6 is rated at 19/29 mpg and Chevy says it will accelerate from 0 to 60 mph in 6.8 seconds.
Near the end of 2013, plans call for the addition of an eAssist model. A 2.4-liter four-cylinder assisted by a battery and electric motor boosts performance and reduces fuel consumption. It?s expected to achieve fuel economy levels of 25/35 mpg.

The 2014 Chevrolet Impala is built on the same Epsilon platform used for the Buick LaCrosse and the Cadillac XTS. The platform is underpinned with a sophisticated four-wheel independent suspension, electric variable-assist steering and the brakes have the GM developed and patented DuraLife? rotors. The specially treated rotors have a longer life expectancy, eliminate shutter and always look bright and rust free.

Driving through the mountains east of San Diego, the big Impala showed that this is the best handling big Chevy sedan to date. The car felt more like a sport sedan than the bulky imprecise big sedans of previous generations. It was actually fun to drive. My only complaint is the manual shifting mechanism on the transmission. The Impala uses a toggle style shifter mounted in the top of the shifter. When the transmission is in the manual mode the transmission can be shifted up or down by pushing that button. Unfortunately, the shifter stalk is too far back when pulled into the manual mode requiring the driver to move an arm too far back and into an awkward position to shift. Shift paddles or even a gated shifter would be far preferable.

Other than the shifter, the controls are well placed on the steering wheel and center stack. I especially like that the engineers maintained knobs for many of the audio and climate controls rather than falling under the spell of the sexy touch and slide controls many designers are going to. 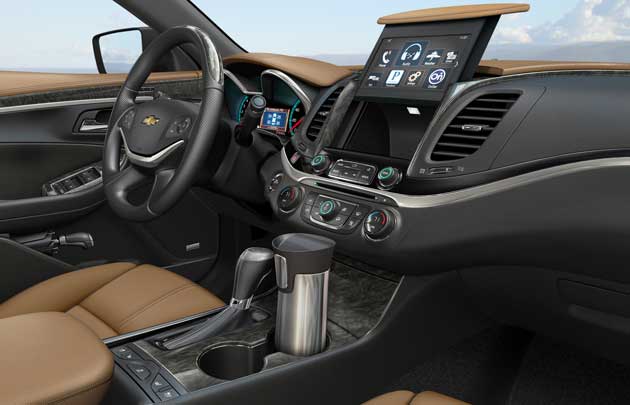 When it?s back in position, the eight-inch touch screen controls the Chevrolet MyLink system that is available on the LT and LTZ models. MyLink is an advanced audio and navigation system that uses a linked cell phone to provide a variety of handy services like Pandora, On Star, weather and hands-free phoning. The touch system has gesture recognition, which reacts to subtle, swipes, flicks, clicks and drags to activate and personalize the system. It works more like the screen on one of the smart phones. It also has an advanced natural voice recognition system for people not verbally challenged.

The 2014 Chevrolet Impala has a long list of available safety technologies including forward collision alert, lane departure warning, side blind-zone alert, rear cross traffic alert and collision mitigation braking. There is also a rear camera system, rear park assist and a full speed range adaptive cruise control that will stop the car if the vehicle ahead stops. To start back up, the driver just pushes the resume button and the cruise control is reactivated and starts the car moving again. 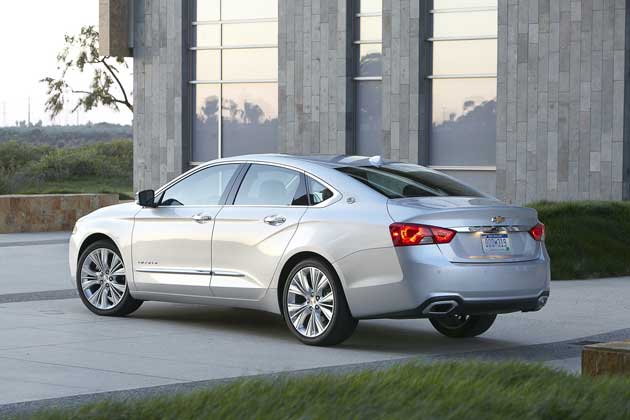 I tried out the adaptive cruise control in the busy San Diego traffic and it works very well, even when another car crowds into a small space in front of you.
The 2014 Chevrolet Impala is available at dealerships now with prices ranging from $27,535, including the destination charge, for the LS up to $36,580 for the 2LTZ model. Load the LTZ with the two available packages, MyLink and the adaptive cruise control and the price can go to just over $41,000.

Since 2004, the Impala has been America?s best-selling full-size sedan. However, that?s been mostly due to strong fleet sales. For example, 70 percent of the 169,000 Impala?s sold last year went to fleets. Chevrolet officials hope to reverse that trend with 70 percent of the new car sales going to retail consumers. Plans call for continuing to build the previous generation Impala exclusively for fleet sales for an undetermined time. The fleet model will be called the Impala Limited.

The 2014 Impala puts Chevrolet back in the game as a strong competitor for cars like the Toyota Avalon, Ford Taurus and Hyundai Azera. The 2014 Chevrolet Impala could be the best car in that category. 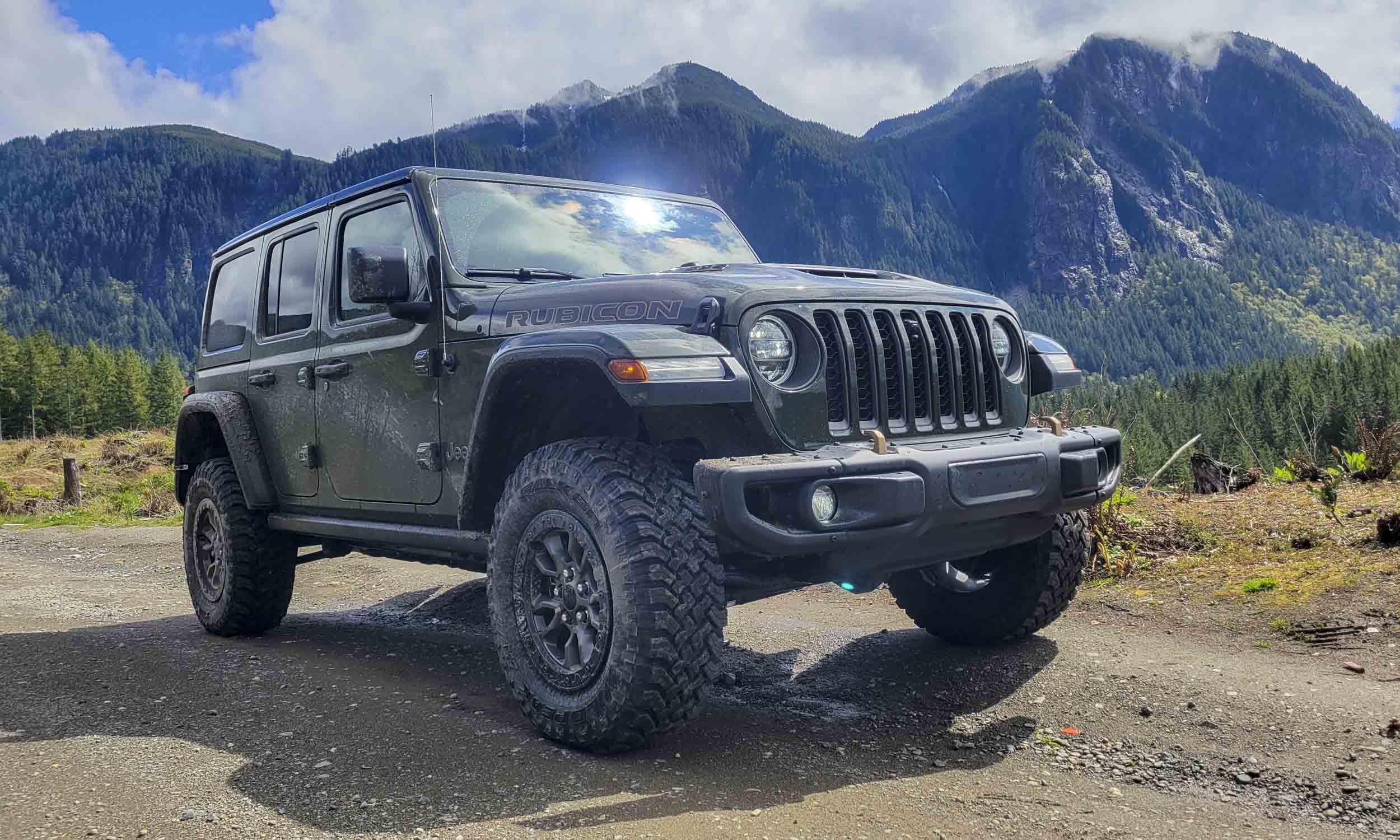