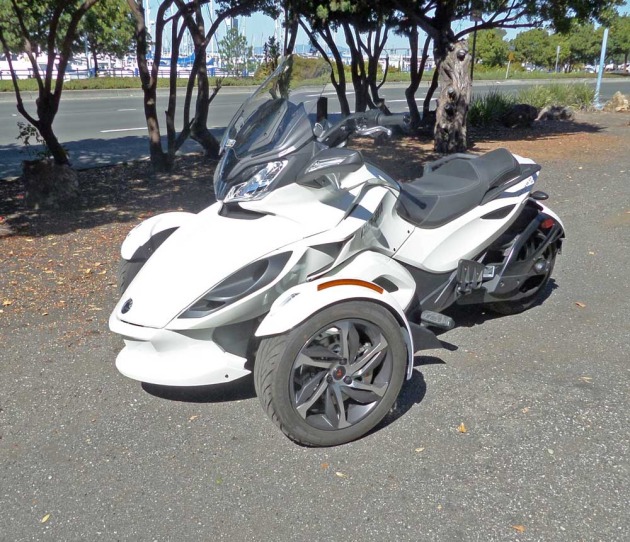 Perhaps the most frequent question posed of the BRP Can-Am Spyder is,?What is it?? That?s usually followed by, ?Do you have to have a motorcycle license to ride it?? And then of course there?s, ?If you don?t need a motorcycle endorsement on your driver?s license, do you have to wear a helmet?? BRP, by the way is for Bombardier Recreational Products ? a now privately held company that no longer deals in the production of jet aircraft or trains. 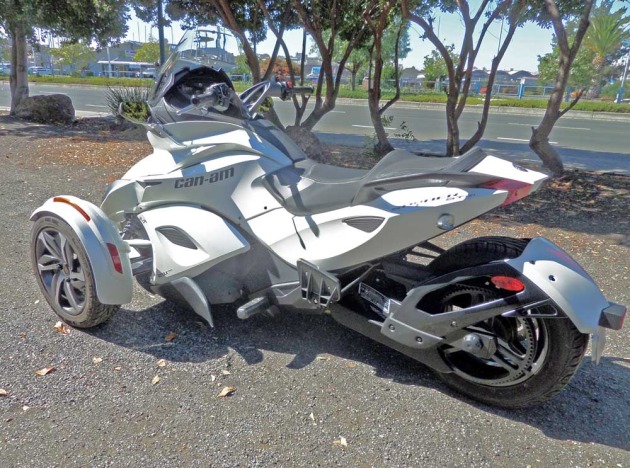 To answer the initial query, it is in reality, a little bit of all three. It is a motorcycle, at least in spirit and in concept. It?s not really a trike in the traditional sense, since the Spyder comes with its two wheels up front and the single wheel trailing aft and acting as the drive wheel, while a trike positions two wheels in the rear, with one up front. The Roadster moniker comes into play due to its open air driving position and car-like stability features. 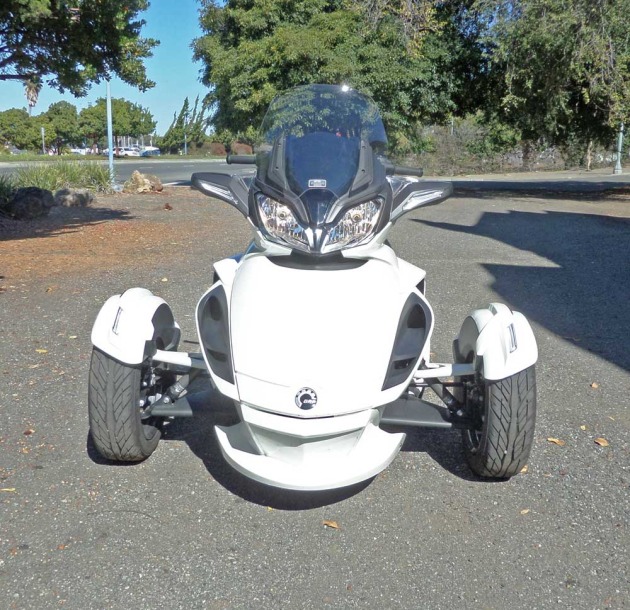 As for the motorcycle license requirement issue, a word of caution ? there seems to be a level of ambiguous interpretation on the part of individual law enforcement agencies, so having one is certainly more prudent than not having one. And finally, concerning the necessity of donning a helmet ? do it whether you have to or not ? it?s the smart thing to do, and definitely in your best interest, since bugs and rocks hurt. Actually, no motorcycle license is required in California, Delaware or South Carolina, or, for that matter, in all of Europe except Greece. Many states require specific three-wheel endorsements which are awarded after proficiency testing. For the most part, if the vehicle is straddled over, it?s a motorcycle, whereas sitting in the vehicle renders it an automobile, with applicable rules and regulations applying respectively.

Why two wheels up front and a single driving wheel in the rear? Marc Lacroix, Spyder Roadster Product and Public Relations Manager pointed out that BRP is noted for innovative paradigm shifts, citing sit-down vs. standup personal watercraft (Sea-Doo), and the snowmobile (Ski-Doo) vs. dog sled. Lacroix explained that the vehicle?s purpose was to override (no pun intended) many potential consumer?s negative feelings or objections toward traditional two-wheeled motorcycles. Vehicle stability, or the lack thereof, with conventional motorcycles is no longer an issue with three wheels planted on the ground. Riding skills are easier to master with three wheels rather than two, and safety technology is far superior. Licensing is easier where necessary and comfort, affordability and practicality are other factors enjoying elevated levels with the Spyder.

As a point of interest, Rotax motors may also be found as power sources in Aprilia, BMW and early Buell motorcycles. The Can-Am Spyder Roadster runs on regular fuel and has a top speed of 110 mph. Not bad for a craft that tips the scales at 864 pounds dry.

The unique 998 cc Rotax motor mounts in a steel frame, utilizing Surrounding Spar Technology (SST), adding to its stability. The front suspension consists of a double A-arm with an anti-roll bar and 5.5-inches of travel, while the rear suspension features a single swing-arm with mono-shock, adjustable cam and 6.0-inches of travel. The front wheels are not articulated and do not lean into turns, as do those of Piaggio?s MP3 scooters. Special tires from Kenda ? 15-inch front and rear, mount on attractive three-double-spoke alloy wheels, with an optional 6-spoke design available. There is no traditional right hand brake on the Spyder ? instead, a right foot-actuated, fully integrated Brembo hydraulic 3-wheel braking system with dual discs forward and a single disc aft, handles halting duties. There is a console-mounted, electromechanical parking brake on the console (earlier models had a foot-operated mechanical lever on the left side rear of the Spyder). Foot controls (brake and shifter) are mid-mounted. An optional handlebar riser is available to accommodate taller riders. When in reverse gear, there is no backup light, only emergency flashers, so caution must be exercised, as there is no indication that you are backing. For security, the front wheels may be locked, pointed in either direction, and with the parking brake activated under power, the two actions render the Spyder nearly immovable once turned off. 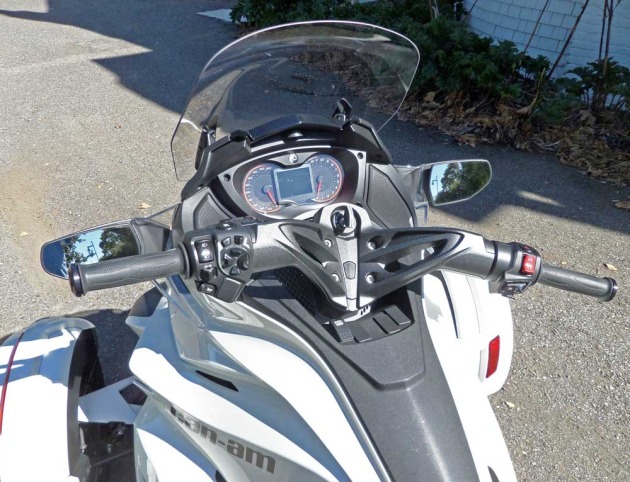 Confidence-building safety technology includes: an anti-lock braking system (ABS); Electronic Brake Force Distribution; Traction Control System; Bosch version 8 Vehicle Stability System (the same used by Audi automobiles); and Stability Control System with roll-over mitigation. There?s even Dynamic Power Steering with variable assist. You certainly won?t find all those features on your conventional bike. Incidentally, the systems cannot be turned off or overridden. There is even an instrument panel warning that appears each time the ignition is turned on, that requires acknowledgement before one can begin riding. 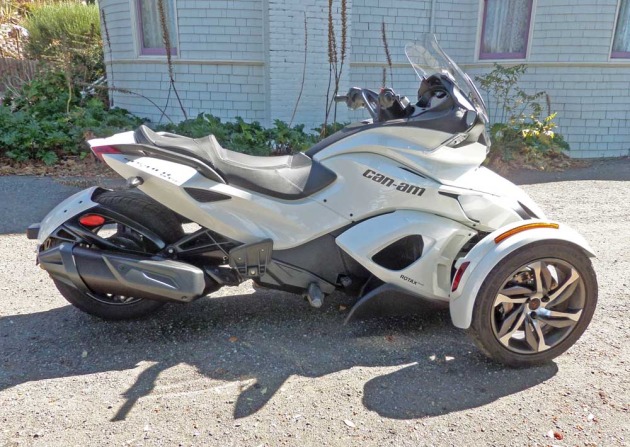 The styling and design of the Can-Am Spyder Roadster is both contemporary and futuristic, while appearing different from everything else on the road. It doesn?t look like a motorcycle, car or trike ? it essentially creates a totally new category of its own. It may best be described as a ?rider-active? vehicle with a large streamlined, watertight trunk located in the nose. My most recent BRP Can-Am Spyder Roadster was an ST-S model. It was finished in Pearl White metallic, with the base price set at $20,549., with several options and features available for personalization and functionality enhancement which could conceivably drive the final sticker to a point considerably higher. Estimated cost of my test unit was $20,799. There are several other model Spyders offered in the lineup to satisfy varying desires and needs. A new Can-Am Spyder FE-3 Sport Cruising version will bow in 2015. Keep in mind that there are different levels of the various models and pricing can top out in the $30,000 plus range. 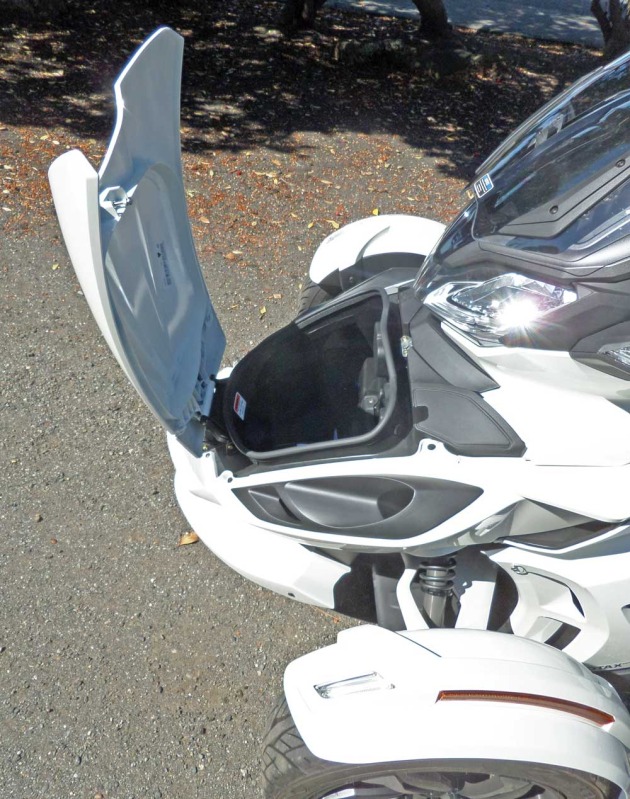 SUMMARY: ?Dyed in the Wool? sportbike riders may or may not take to the Spyder ? after all, how much fun could it be with all that stability enhancement technology on board, interfering with high-speed canyon carving? Well, you can still enjoy the ?twisties? ? just with a different technique. Riding the Spyder Roadster can be both fun and relaxing ? perhaps not at the same time, but try tooling around town at low speed on your naked bike and see how much fun or how relaxing it is ? and?..if you forget to put your foot down, it can be really embarrassing. 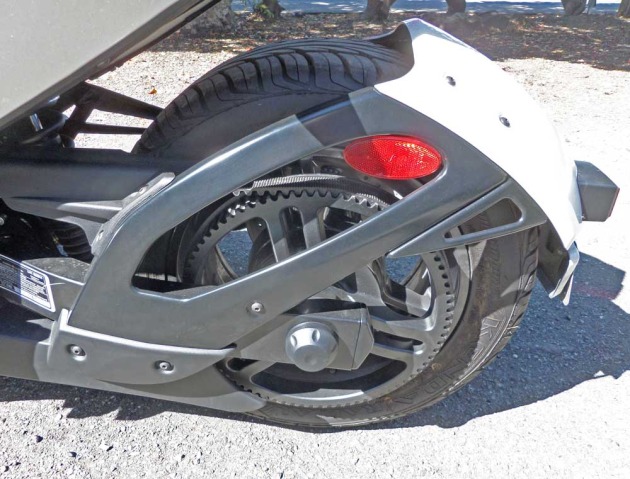 Non-bikers should have no problem learning to master the Spyder Roadster. Experienced traditional bike riders on the other hand, will have some adapting to do. Counter-steering is out, as there?s no hand brake and with the optional electronic shift version, there?s no clutch lever either. Leaning into a turn requires a different technique as well. Oh, and you don?t need to put a foot down when coming to a stop. The Spyder definitely feels different, especially in the steering department. As for technology intervention, BRP has done their homework ? the Spyder is capable of smoking the rear tire for days off the line (keep in mind though that replacement rubber can?t be found in just any tire store) as long as the vehicle is kept in a straight line and the yaw doesn?t change intentionally or otherwise. 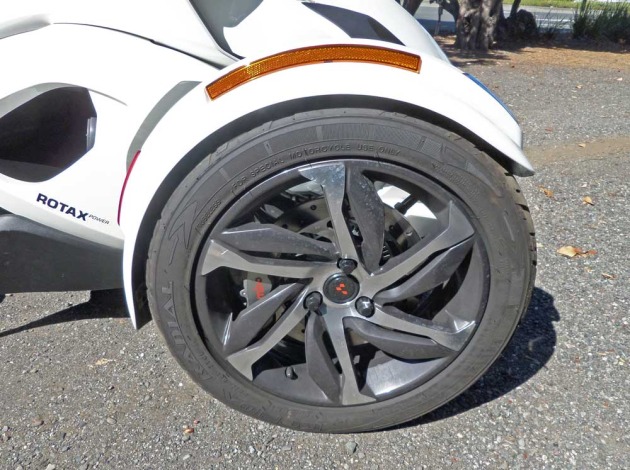 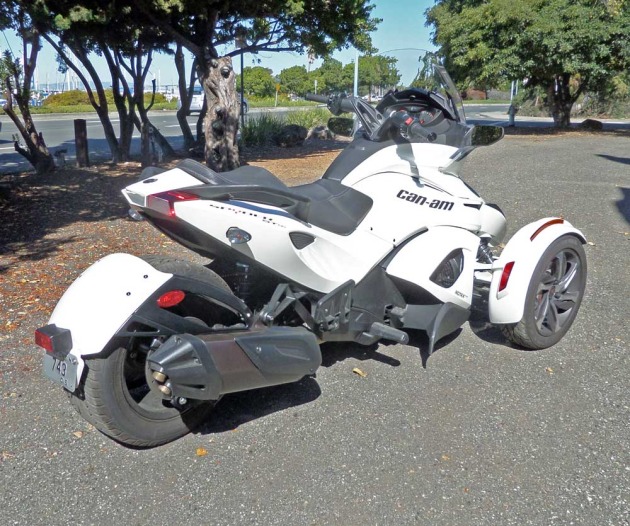 Security is provided by a steering lock with the front wheels turned in either direction and there is an electronic parking brake that requires power to deactivate, so unauthorized movement of the Spyder?s 864 pound mass is would prove extremely difficult.

Call it what you will, this unique and innovative Roadster is entertaining to say the least, and should open the door to a simpler kind of ?wind-in-your-face? motoring for many who were before put off by the perceived perils of two-wheeled cycling. The Spyder is equally at home with a solo rider or two-up, and for extended trips, there is 12 gallons of storage in the front locking trunk.

Noted comedian, car and bike guy and discerning collector, Jay Leno owns his very own Can-Am Spyder Roadster, serial number 001, so it has to be a cool machine, right?