A blend of Luxury and Performance 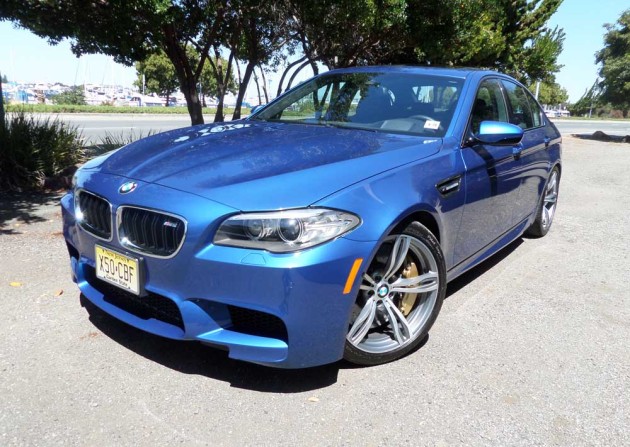 The BMW M5 first appeared more than a quarter century ago back in 1988, exemplifying an impressive marriage of a luxury sedan with that of a super-car level performance machine. The iconic four-door, five passenger sedan entered its fifth generation last year. The 2014 BMW M5 is a high-performance sports car with dynamic potential that focuses directly on the demands of track use while also providing a worthy benchmark in daily driving with touring comfort and luxury with innovative equipment features. Additionally, it achieves a heightened level in its class for efficiency. 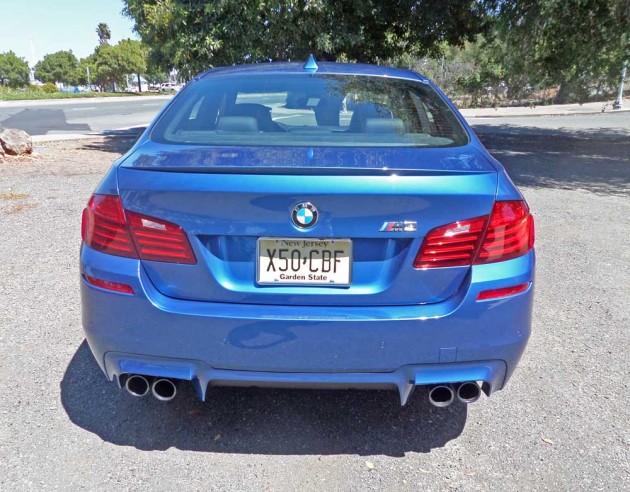 In an effort to achieve such elevated performance goals, BMW last year introduced the most potent engine ever fitted in a series-produced model from BMW M GmbH mated to a new high-torque 7-speed M-Double Clutch (M-DCT). An innovative Active M Differential that optimizes power transfer to the rear wheels was combined with chassis upgrades developed on the history of BMW?s racing expertise, ensuring that the engine?s performance could be transferred to the road or track. 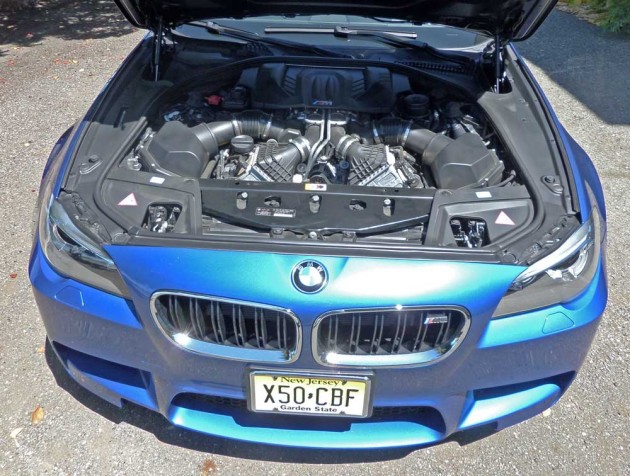 Lurking beneath the hood of the BMW M5 is a, high-revving 4.4-liter V8 engine with M TwinPower Turbo (with Twin Scroll Twin Turbo technology, a cross-bank exhaust manifold, High Precision Injection fuel direct injection and VALVETRONIC fully variable valve control), maximum output of 560 hp in a range from 6,000 ? 7,000 rpm and peak torque of 500 pound feet between 1,500 and 5,750 rpm. The instantaneous delivery of power and sustained thrust that M cars are noted for results in an acceleration of 0? 60 mph in 4.1 seconds (auto) and 4.3 seconds (manual). 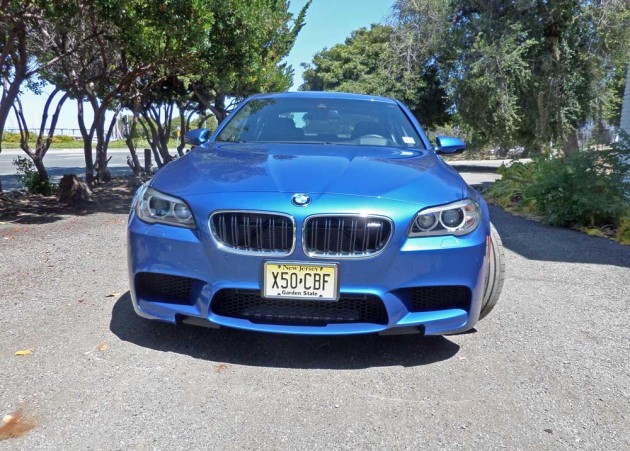 The significantly improved balance between the performance-focused M experience and the car?s fuel consumption originates from the efficiency of the V8 engine as well as from leading edge BMW EfficientDynamics technology including the Auto Start-Stop function in conjunction with the standard seven-speed M Double Clutch Transmission with Drivelogic. The 2014 BMW M5 is also optionally available with a six-speed manual gearbox with downshift throttle blip rev matching.

Let?s face it,?M? could might well stand for Magical, Magnificent, or even Marvelous in the case of M Series machines, but it also stands for ultimate performance, built by the team at BMW M GmbH, BMW?s exclusive performance division. 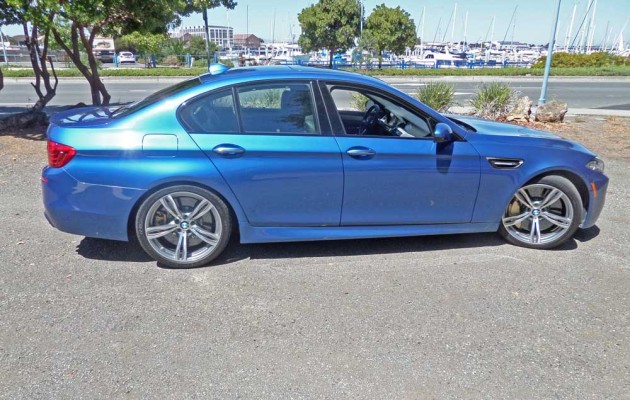 The new 2014 BMW M5 is capable of an electronically-limited top speed of 155mph. The acoustic note of the M5?s engine and exhaust is exhilarating – signature BMW M.

The BMW M5 features Brake Energy Regeneration and an Auto Start-Stop function that automatically switches off the engine when the car comes to a stop. This function may be deactivated.

The 2014 BMW M5 Sedan incorporates BMW?s advanced Dynamic Stability Control and Anti-lock Braking System, including Cornering Brake Control, Dynamic Brake Control, Brake Assistant, a Brake Fade Compensation function along with a Brake Drying function and Start-off Assistant. The DSC system has three levels of operation. The default is ?On? which provides the greatest level of stability and traction control. M Dynamic Mode may be activated to override the default setting by pressing the DSC button on the center console. This mode allows for spirited driving scenarios, yet still provides safety parameters, by raising the intervention thresholds of DSC. ?DSC Off? mode may be activated with a long-push of the DSC button for complete deactivation of the system. 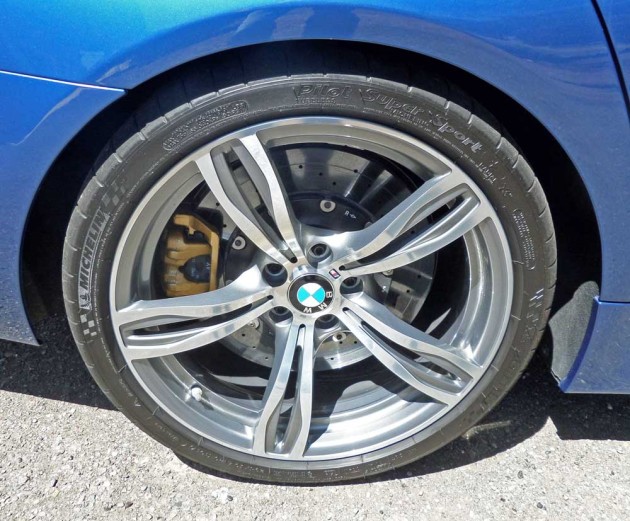 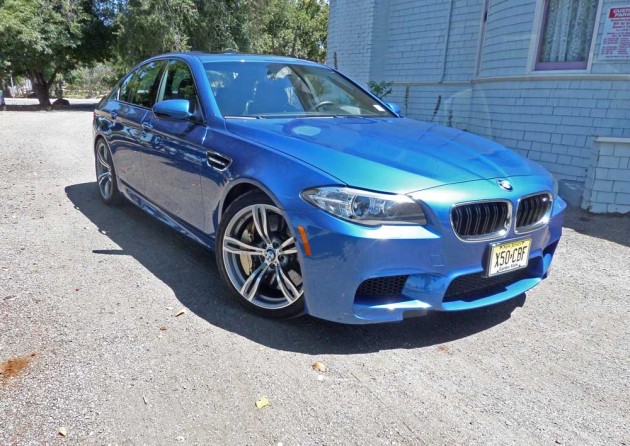 With regard to its eye appeal, the bold athletic nature of the M5 is clearly visible with the front fenders featuring prominently flared wheel arches and traditional M gills sporting a wide chrome border and indicator bars that bear the M logo. Sculpted creases of the M side skirts sweep upward toward the rear, drawing the eye to the 20-inch forged M light alloy wheels with 5-double-spokes.

Up front, form follows function with the aggressive frontal openings, while the rear is finished off by twin dual exhaust outlets. and a fully integrated rear decklid spoiler that joins the L-shaped LED taillamps. The M5, while technically a Sedan, with four doors, actually displays a coupe-like profile with its blacked out ?B? pillars and singular greenhouse glass surround. 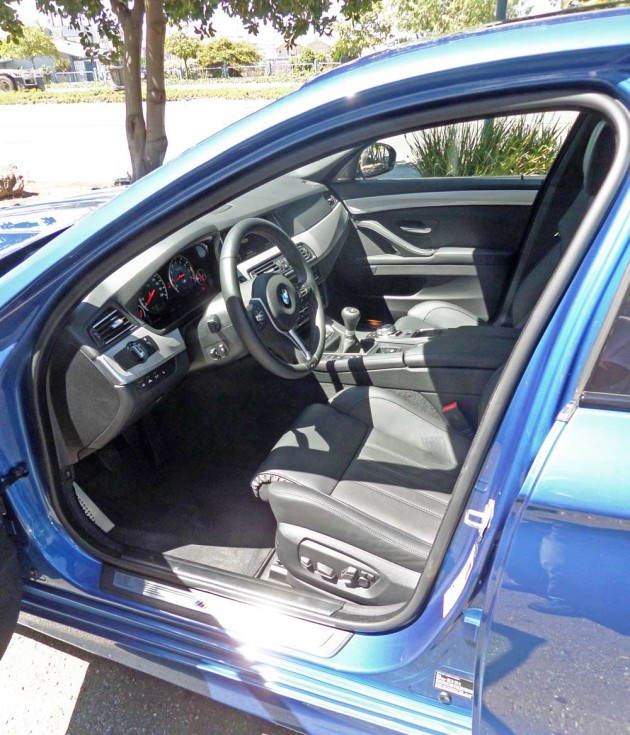 The interior has been enhanced, while retaining a sports car, driver-oriented cockpit with functional controls angled toward the driver, with materials that are soft and inviting. Leather wrapping is standard on the sport steering wheel, and there is now a 10.2-inch flat screen display for navigation and vehicle function information. Gauges and instrumentation feature Black Panel Technology. Starting the engine brings the onboard information and check control light to life, and once the vehicle is running, prompts appear from the navigation and active driver assistance systems between the dials, including navigation arrows and various system warnings. Instrumentation illumination changes from white to classic BMW amber at night, with an adjustable Head-Up Display. 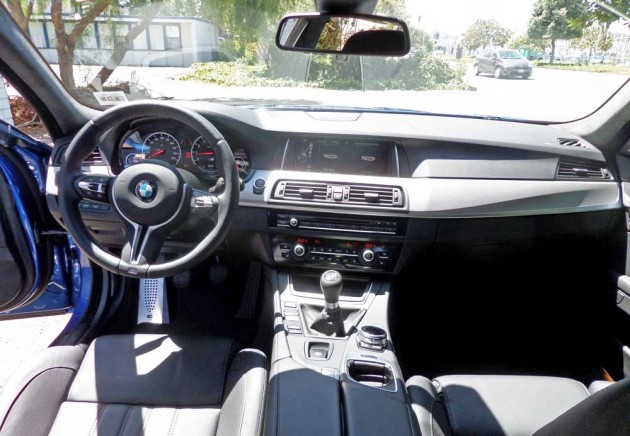 My test 2014 BMW M5 Sedan came with the 6-speed manual gearbox and featured an exterior finished in Monte Carlo Blue metallic and Black Marino leather interior highlighted by patterned trim accents on the dash, doors, and console. The base price was set at $92,900. with the final sticker reaching $118,775. after adding: the newly available Competition Package, Driver Assistance Plus Package, Executive Package, Carbon Ceramic Brakes, Gas Guzzler Tax and Destination charge.

SUMMARY: The 2014 BMW M5 Sedan is a stunning Bavarian vehicle, with pleasing balanced proportions and an athletic stance. It raises the bar in the performance, luxury sedan category.

While the car is an elegant wonder to behold, better yet, is a complete joy to drive ? on the road or on a track, and in either the manual or automatic transmission version. The 7-speed DCT automatic is capable of delivering superior performance numbers than the 6-speed manual that I experienced, which is very nice, mind you, especially with its downshift throttle blip rev-matching. 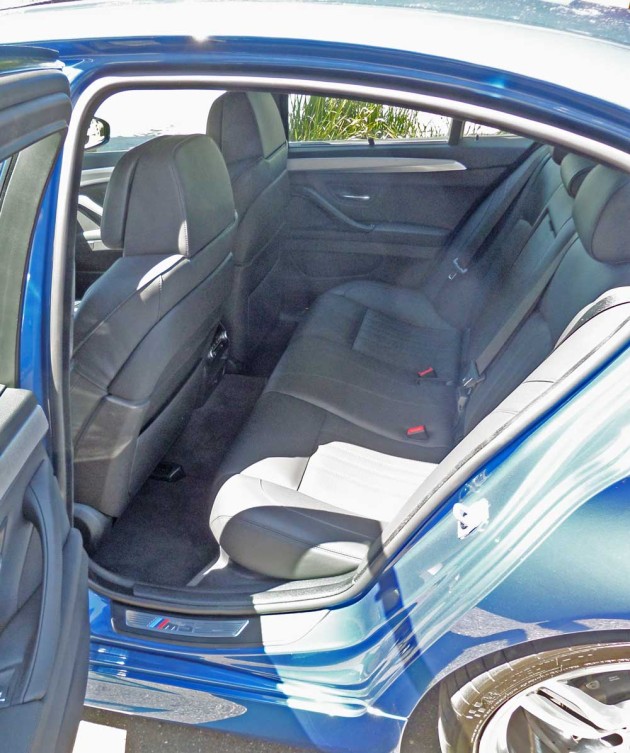 Acceleration is available instantly on demand, with steering immediately responsive, and the ride quality, though extremely stable and flat, is very compliant and not at all punishing? that is, unless you want it to be by selecting Sport+ through the Dynamic Damping Control ? other settings are: Normal and Comfort. The M drive system in the new M5 Sedan enables the driver to adjust various parameters including: the engine management, the response of the Servotronic steering system, the M DCT shift program (with the automatic), the DSC mode, the DDC responses and the Head Up Display information. Settings may be configured in virtually any combination through the iDrive menu or by using the M Drive select buttons?on the center console. Experimentation and practice will perfect operational efficiency, which is not initially intuitive.

There are a host of Driver Assistance features optionally available to further enhance both one?s driving pleasure and prowess should one feel the need to spend even more, but a base level 2014 BMW M5 Sedan is definitely an ultimate driving machine to aspire to in it own right. This M car truly fills the bill for luxurious comfort and convenience, along with stellar performance capability. 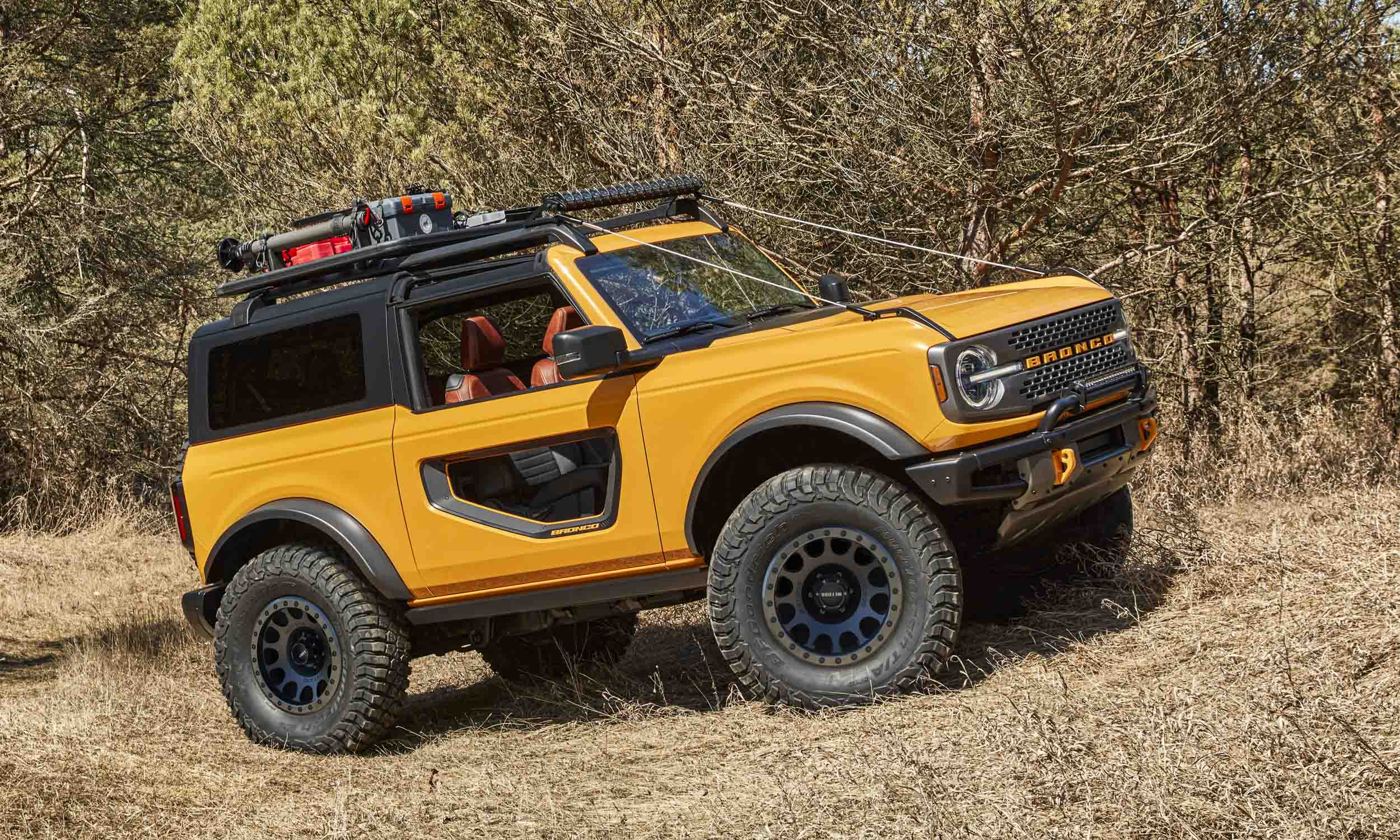 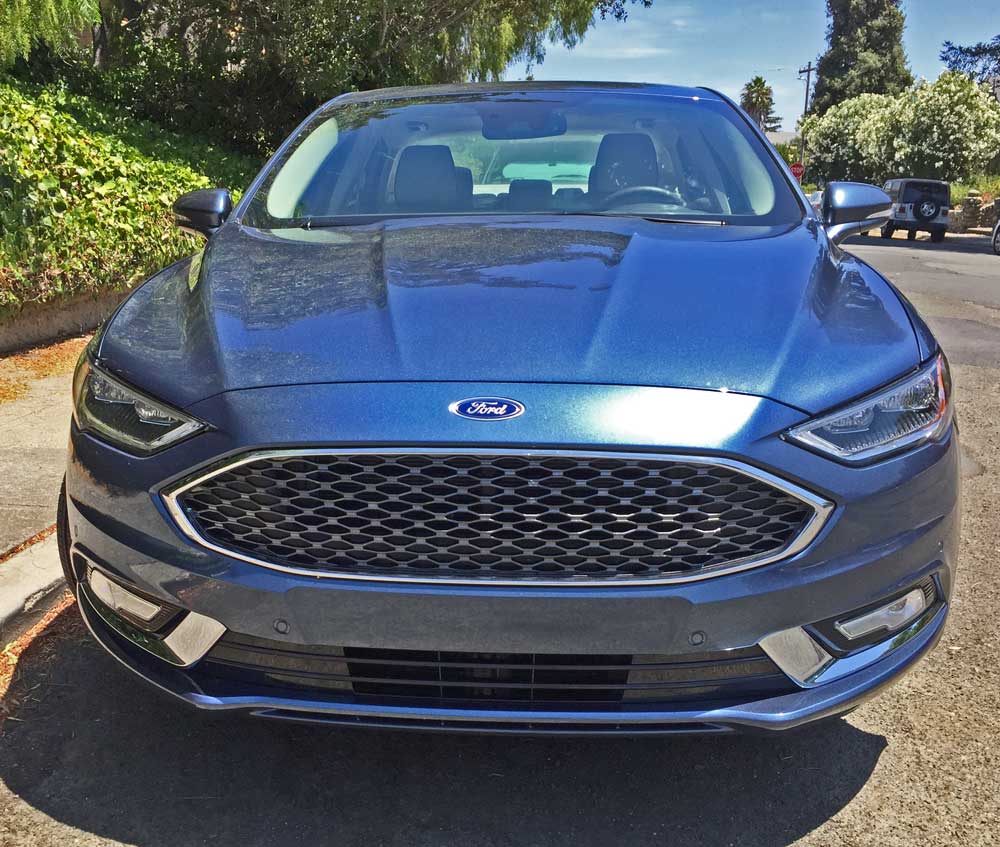