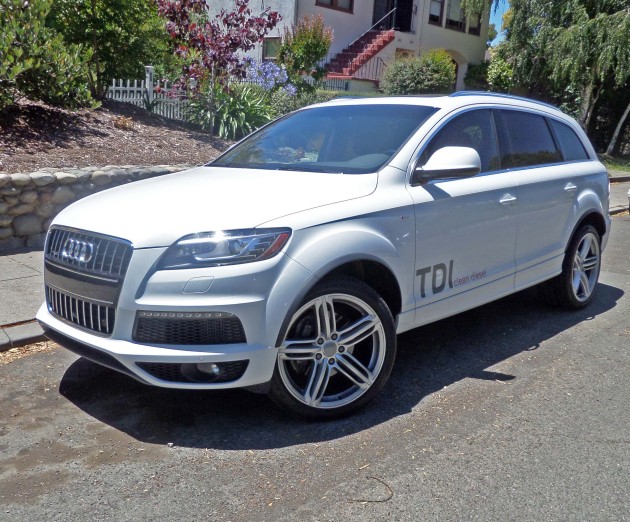 In only its second year of production, Audi?s full size SUV ? the Q7 offered significant enhancements, while making vehicle selection and ordering a more simplified process. The 2008 Q7 was available three ways: as a base model powered by a 3.6-liter, 280 horsepower, DOHC V6; as a Premium equipped model, powered by the same 3.6-liter V6; and finally by a more potent Premium trim level that draws its motive power from a 4.2-liter, DOHC V8 that generated 350 horsepower @ 6,800 rpm, along with 325 pound feet of torque @ 3,500 rpm. All Q7 examples coupled the engines to six-speed automatic transmissions featuring Tiptronic?. The final motive force was delivered to all four wheels via Audi?s renowned quattro all-wheel drive system. It was rumored that a V-12 diesel powered Q7 was due to appear on the scene in the not-too-distant future ? the same engine powering the R8 LeMans concept vehicle. Enter the Audi Q7 for 2014. 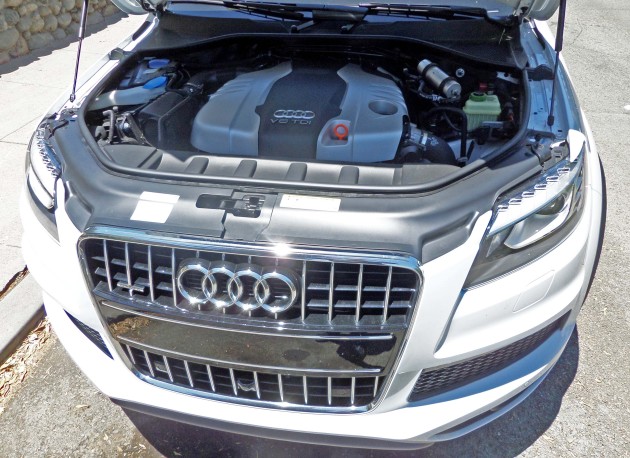 In terms of visual enhancements, the 2014 Audi Q7 7 passenger SUV equips all models with Xenion plus headlights as standard fare along with Audi?s instantly recognizable LED daytime running lamps, improving visibility while using only half the energy of conventional bulbs.

The Q7?s styling continues with sophisticated curves, sweeping roofline and signature Audi Singleframe? grille in gloss or matte Black, adding to the Q7?s iconic and powerful design form. The front overhang is noticeably short, while the sill line rises dramatically towards the rear, curving around the distinctly contoured wheel arches. The A-pillar, is optically accelerated by its flat projection angle, forming a harmonious transition area from the hood to the roofline which begins to drop again just ahead of the B-pillar, finally ending up in a coupe-like curve at the flat D-pillar. A spoiler carrying the third brake light provides a nice final touch. 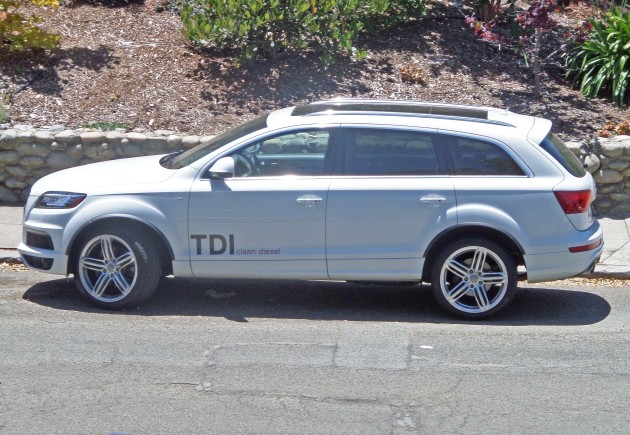 At the rear, the Audi Q7 sports an unusual and dynamic look. The sweeping wrap-around tailgate with its S-shaped shut line offers an optically stabilizing effect while expressing a forward force. The tailgate?s light strip is embedded and carries single-piece lights with an expressive design that extends to the body flanks, accentuating the rear theme of horizontal lines. The body?s shoulder line?ends at the top edge of the lights. The twin exhaust pipes are symmetrically arranged, with 3.15-inch diameter tips on V6 powered models. 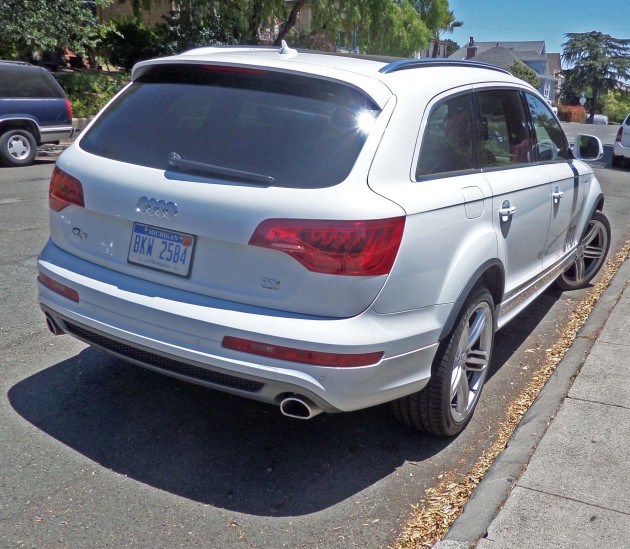 The lines and forms of the interior match the flavor and image of the exterior, incorporating quality materials and craftsmanship. The cockpit styling and layout of controls is inspired by the Audi A6, and the center console integrates organically into the cockpit, with the main instruments ?speedometer and tachometer ? featuring dropped-shape surrounds. The Multi Media Interface is located on the center tunnel, and is highly impressive for its ergonomic qualities. There are three seat configurations available ensuring compatibility with consumer needs, with capacity for from five to seven passengers, along with up to 28 loading configurations. 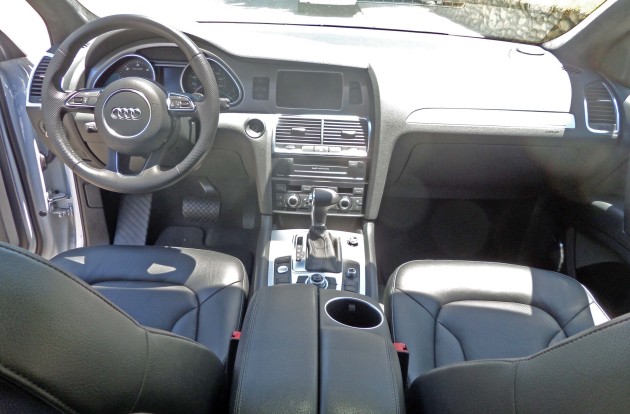 SUMMARY : The Q7 is really quite massive, and even though it weighs in at more than two and a half tons unladen, it is capable of moving from 0-60 mph in a mere 7.7 seconds.

Acceleration is more than satisfactory given the vehicle?s displacement of the atmosphere, and the handling displays an exceptionally agile quality considering its overall mass. The ride comfort level is superlative, especially with the optional air suspension, and the interior surroundings are sumptuous and luxurious. The level and content of convenience features all contribute to joyful travel. 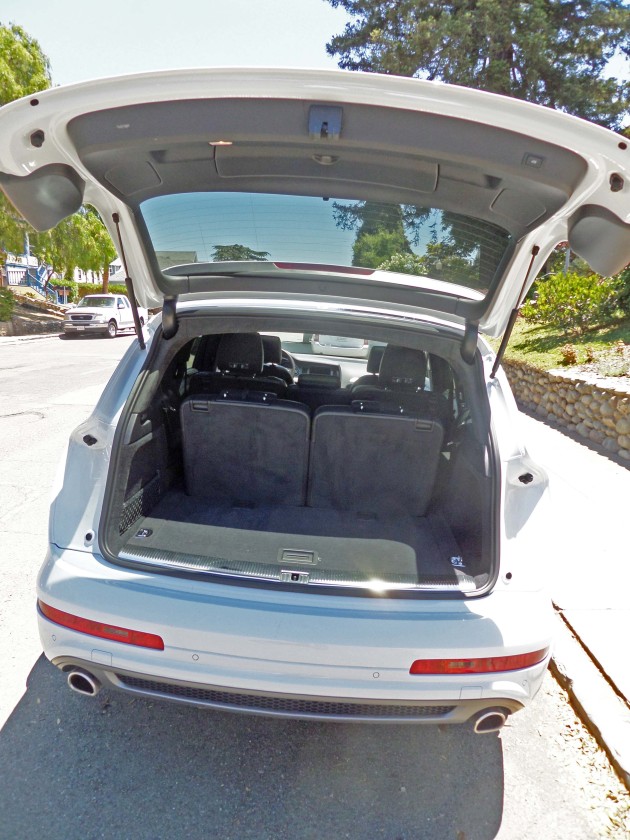 Visually, the Q7 is anything but demure, but the Audi design team has managed to render it as most attractive particularly in Premium S-Line trim, which makes the Q7 more dynamic and exclusive. Kudos to Audi for making such a large SUV as attractive as it is, and fitting well into the rest of their vehicle lineup, and to the heightened level of luxury throughout, as well as the surprising agility. Admittedly, the price tag is somewhat lofty, but it seems that you get what you pay for. 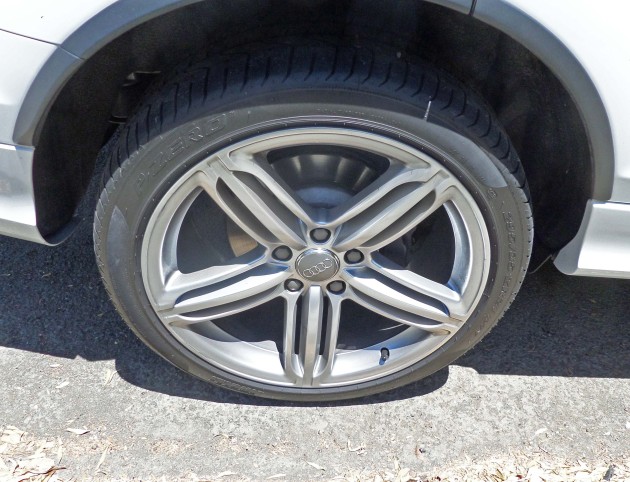 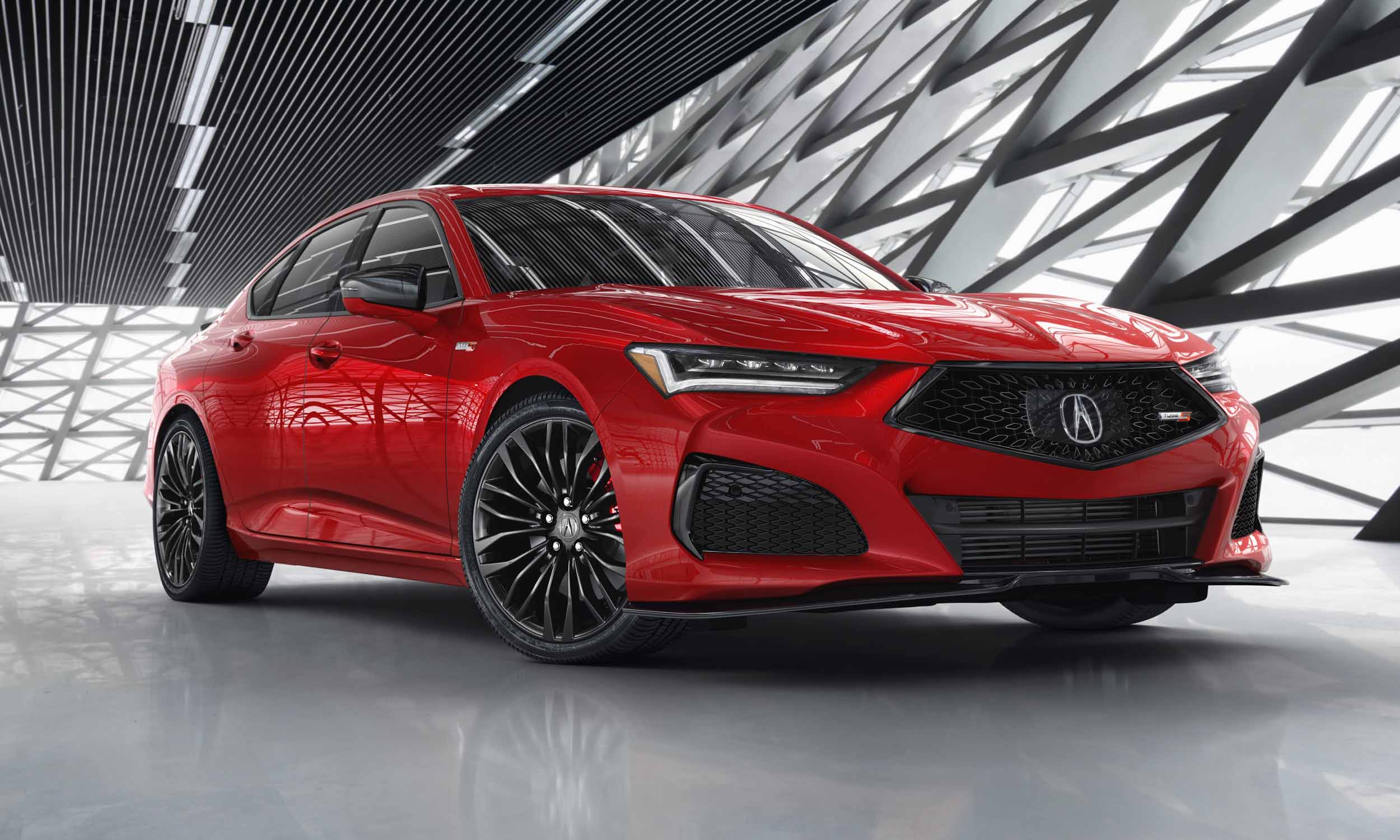