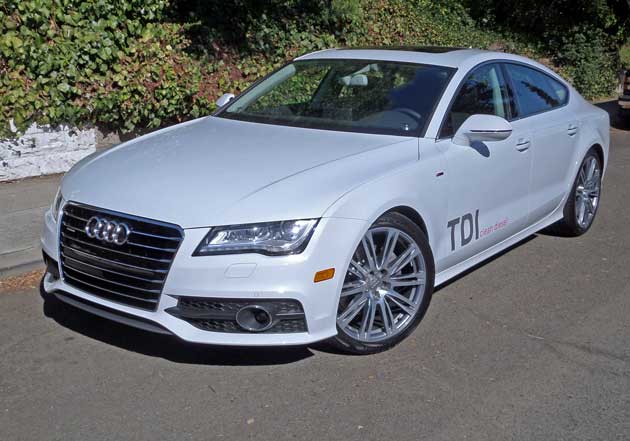 Audi broke new ground in 2012 with the introduction of the A7, representing the next evolution of Audi design. The 2012 Audi A7 blended the emotional appeal of a coupe with the luxury and prestige of a sedan, but with the functionality and versatility normally only found in a wagon. It presented itself as a sleekly profiled four-door sedan ? make that five- door sedan, as the rear was actually in the form of a hatch that is positioned atop a sporty, lightweight chassis, and powered by a highly efficient supercharged V6. The A7?s wheelbase measured 114.7- inches, and the overall length stretched to 195.6-inches. Add the 84.2-inch width and 55.9-inch height and you had an elegant and spacious package. Okay, the hatch idea for an Audi wasn?t necessarily welcomed to the fold with open arms ? in fact yours truly was not a huge fan initially. What was I thinking? It has definitely grown on me over time – ?I?ve come to love it, and the Audi A7 TDI version for 2014 is even better. 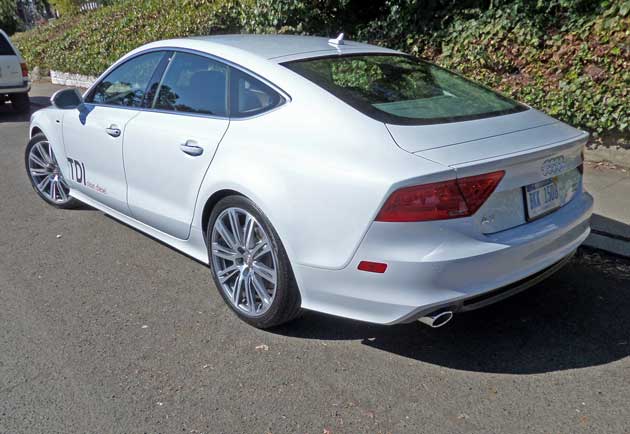 The basic dimensions and design form continue with the 2014 Audi A7. The roofline is low, with a gracefully arched greenhouse and integrated rear doors, which projects a coupe-like profile. The frameless door windows and side mirrors further enhance its coupe-like image; with the ?C?-pillar stretching rearward and flowing into the shoulder character line. The sharp ?tornado? line begins forward at the headlamps, extending across the fenders, over the doors, terminating in a soft slope toward the taillamps. The overall effect pays homage to the 1969 Audi 100 Coupe S. Audi?s signature Singleframe? grille is contoured at the hood?s leading edge, featuring a chrome surround framing the high-gloss black lattices with chrome accents. The wide, low air inlets and horizontal struts, along with the fascia?s horizontal posture, emphasize the car?s width.

In addition to the LEDs in the daytime running lights and the LEDs incorporated into the turn signals ? two powerful LED units comprise both the low and high beam headlamps on both sides. An optional adaptive lighting modifies the illumination level. An integrated rear spoiler deploys at 80 mph and retracts at 50-mph. Dual chrome exhaust outlets blend into the rear fascia and hint at the car?s performance capability. An optional Prestige Package enhances the dynamic appeal of the A7 with redesigned front and rear bumpers with air inlet grilles, extended rocker sills along with a platinum gray diffuser insert. 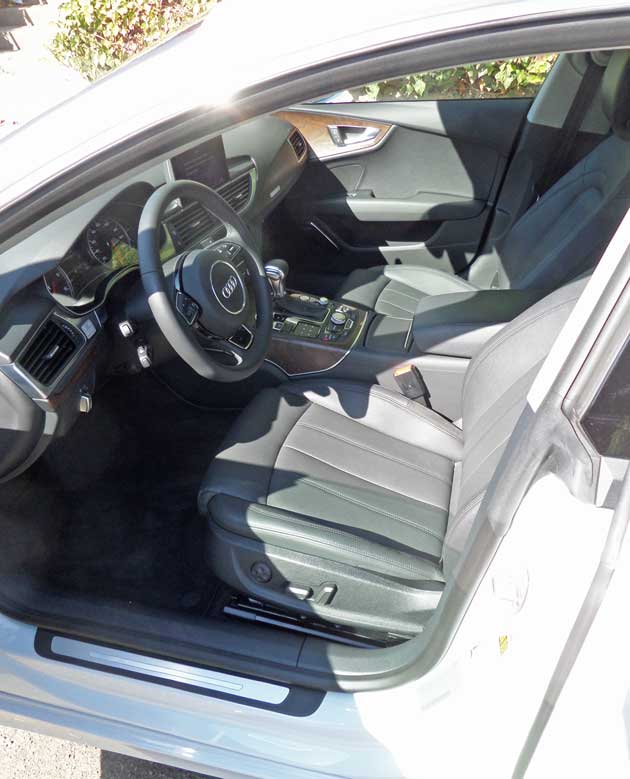 Moving to the interior, the A7 displays a ?wraparound? design encircling the driver and front passenger, while the center console cants toward the driver. Front seats feature 10-way adjustability, with available four-way lumbar support, three-stage ventilation and heating (the latter is available for the two contoured rear seats as well). The interior ambience is heightened rich chrome air vent bezels, with aluminum trim accents highlighting the optional layered wood veneers, along with the four-spoke steering wheel that is height adjustable and telescopic. The rear hatch provides a height adjustable power-lift system that opens and close at the touch of a button. The cargo area is 24.5 cubic feet in its base form, but by folding the 60/40 split rear seat backs flat, an even greater expanse is realized.

Power is still available from a 3.0-liter DOHC, 24-valve supercharged,?intercooled V6 with variable valve timing and spark ignition direct injection that?develops 310 horsepower in a range from 5,500 to 6,500 rpm, while generating?325 pound feet of torque in a range from 2,900 to 4,500 rpm. The engine still?mates to an eight- speed automatic with Tiptronic and Dynamic Shift Program,?and is placed longitudinally up front, driving all four wheels through Audi?s quattro?all-wheel drive system with a hypoid gear with electronic locking front differential,?torque sensing center differential and hypoid gear rear differential with electronic?locking. 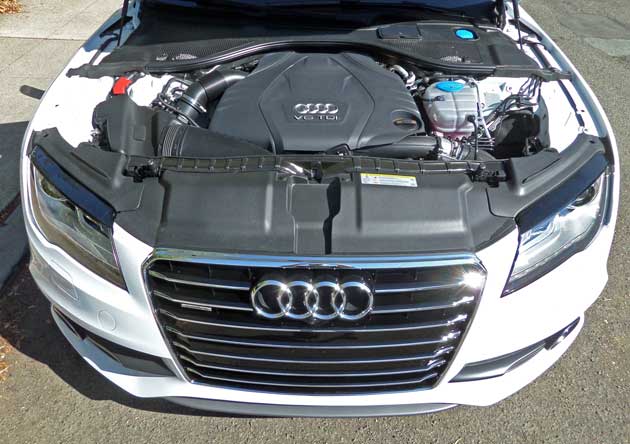 Now, there?s a 3.0-liter TDI V6 fueled by diesel that?s turbocharged rather thanSupercharged added to the lineup, and the output that it delivers is 240?horsepower at 3,500 rpm, along with a whopping 428 pound feet of torque, that?will propel its 4,266 pound? mass from 0-60 mph in 5.4 seconds. Should you?desire higher performance in a racier package, there?s always the S7 and RS7,?both with 4.0-liter turbocharged / TFSI V8 power. The RS 7?s energy is rated at?560 horses and 516 pound feet of torque, and it is capable of rocketing from 0-60?mph in a blistering 3.7 seconds.

The 2014 Audi A7 TDI is the first clean diesel coupe, which delivers an EPA estimated fuel economy of 24-mpg city, 38 mpg highway and 29-mpg combined. All A7 3.0T and 3.0 TDI models are now five-passenger vehicles, while the S7 and RS 7 come exclusively configured for four passengers.

Both V6-powered A7 models start with a Premium Plus trim level, equipped with Audi connect? as standard fare, and infused with state-of-the-art technologies and functional amenities. The A7 model line provides some of Audi?s most advanced technology and driver assistance features and equipment. Audi MMI? touch with handwriting recognition comes with both hard and soft keys, dedicated buttons for commonly-used controls, as well a revolutionary touchpad that is capable of interpreting hand-written inputs.

My test 2014 Audi A7 TDI Quattro Tiptronic model displayed a Glacier White metallic exterior, with a Black interior accented by natural grained and finished trim accents. The Base price was set at $66,900 while the metallic paint, Bang & Olufsen Advanced Sound System, A7 Prestige model with S line exterior features, Driver Assistance package, 20? Sport Package and Destination charge, all combined to increase the final cost to $81,395.

SUMMARY:? The 2014 A7 TDI is a technological marvel with Audi connect, that delivers real-time driver relevant information into the vehicle, such as the Google Earth? navigation with voice recognition, [email protected] Local Search and in vehicle Wi-Fi connectivity for up to 8 devices. A redundant display appears in the form of a 5-inch wide display positioned between the speedometer and tachometer. The Multi Media Interface (MMI) control terminal, located behind the gearshift lever, is in perfect ergonomic arrangement and places its display exactly in the driver’s line of vision, integrated beneath the top dashboard cover. The keyless engine start/stop button offers a nice touch, as does the electronic park brake, with its console mounted set/release switch. The display screen stows neatly into the dash when exiting the car, reappearing when firing up the engine. 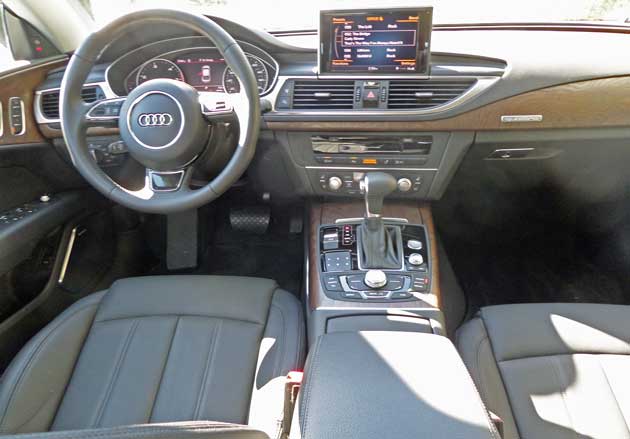 In terms of acceleration, the A7 TDI roars about as if it were powered by a V8, with smooth gear changes from the silky 8-speed transmission, either up or down. Handling is crisp and sporty, and the ride is firm but comfortable and not harsh at all. 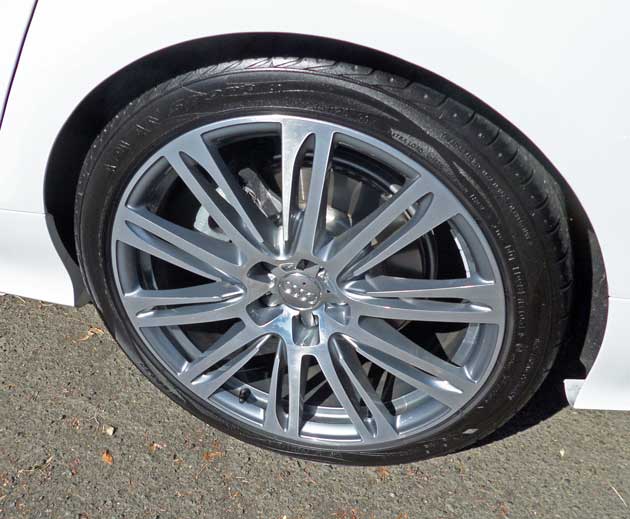 In the final analysis, Audi?s have long been underrated and overlooked in terms of being performance oriented, and trust me, that?s no longer the case. If you?ve not piloted an Audi recently, you owe it to yourself to give it a go. I?m sure you?ll be impressed. The A7 in particular is a delight with its unique and attractive coupe-like look, with the huge plus of the TDI powerplant.

Whatever you do, don?t rule out the prospect of diesel ? it deserves a more prominent place in our society, and it?s growing rapidly in popularity, with the compact car share of diesels expected to more than double over by 2018. The 2014 Audi A7 TDI is a worthy ambassador for diesel power ? it?s no longer noisy, and no longer emits a foul odor. In fact, blindfolded, the majority of drivers or vehicle occupants would be?challenged ?to recognize it as a diesel at all. Come to think of it, a blindfolded driver isn’t really a good idea at all. 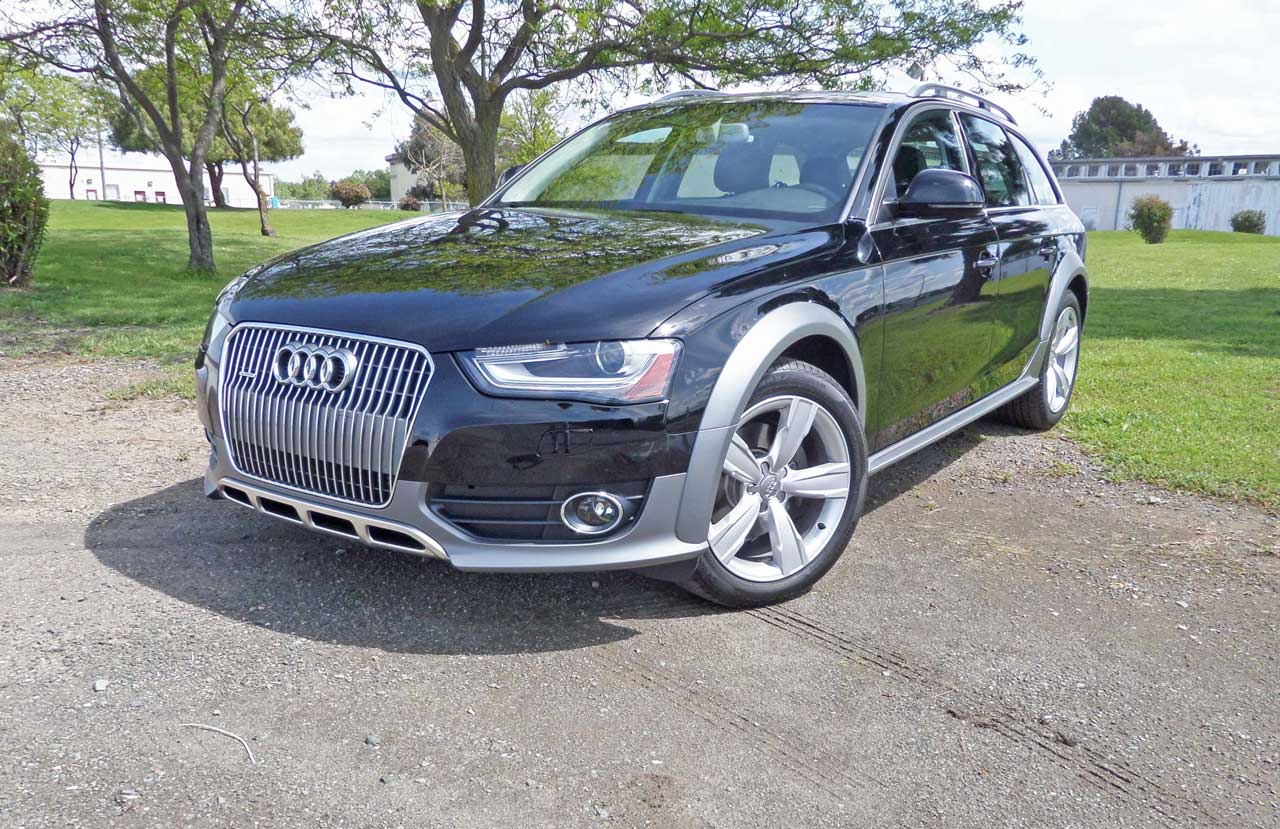