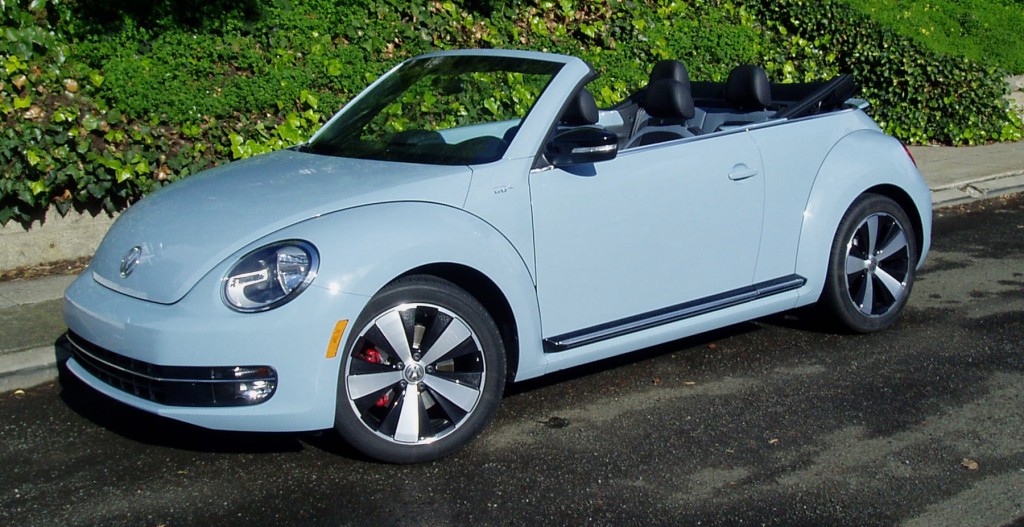 The ?2013 Volkswagen Beetle Convertible is back in a variety of models and? trim levels, with different powerplants and transmissions. It has grown in stature – it is 3.3-inches wider and 6-inches longer, while crouching 1.1-inches lower. The hood is longer with the windshield more upright set further back than before. The roofline is even lower than that of the Coupe – looking much cooler than before with it?s lower top that functions via a one button touch, which raises lowers the windows as part of the operation.

The softtop?s outer shell consists of three layers: an outer one of polyacrylic woven fabric; a middle layer of synthetic rubber; and an inner lining of polyester. Underneath, there?s a three-layer design for the insulation made from polyester non-woven fabric, polyethylene terephthalate insulating fleece and polyester spunboard. The headliner is made form foam-laminated fabric. 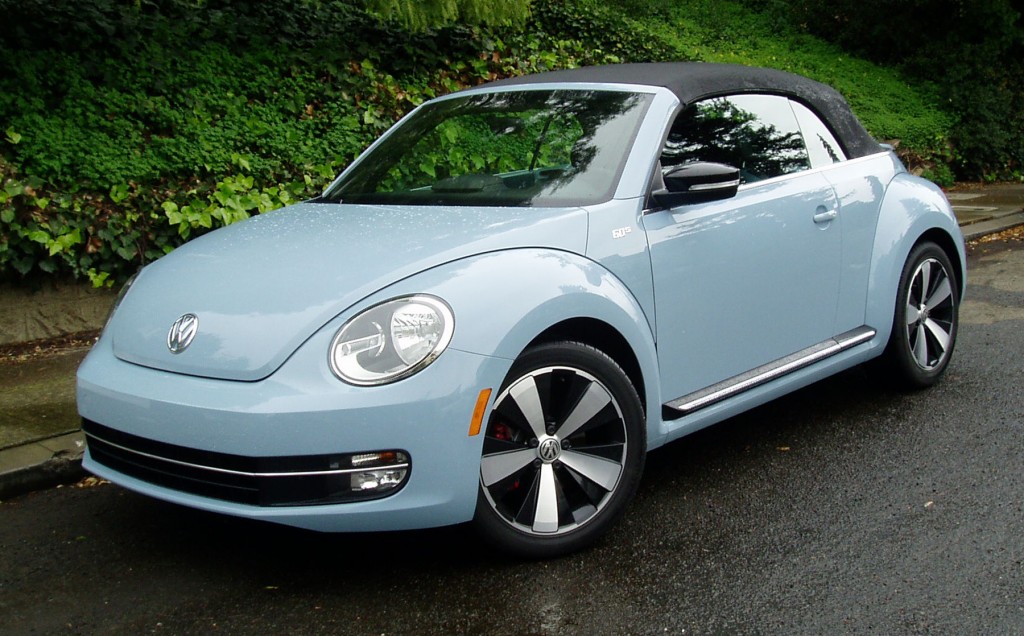 The top is powered by two electric motors that latch and unlatch the lid at the touch of a button located on the upper rail of the windshield surround. It stows in 9.5 seconds and raises in 11.0 seconds an may be operated in either direction at speeds of up to 31 mph. Trunk space is not affected with the top stowed. An optional wind-blocking system is available, which stores neatly in the trunk without interfering with cargo space. It lies flat when lowered and there?s a flexible leatherette top boot to tidy things up. 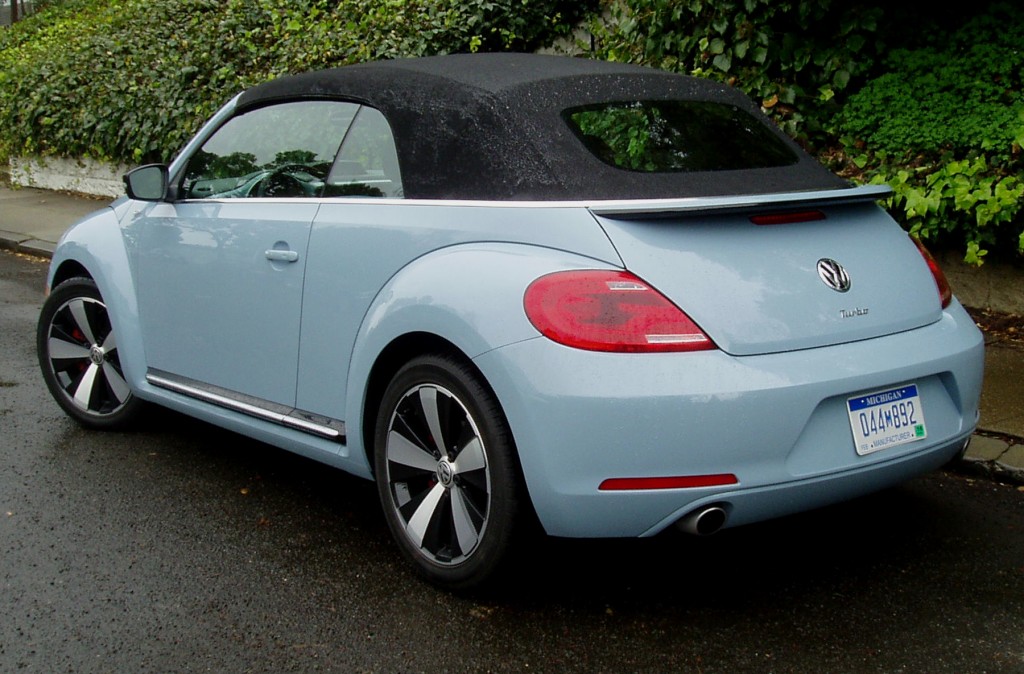 The 2013 Volkswagen Beetle Convertible?s exterior displays a classic profile, while reinterpreting the design in a sportier and more dynamic style. The variety of trims includes three special limited editions at launch that offer specific period themes reflecting the flavor of three separate decades: 50s; 60s; and 70?s. There will only be 600 special edition models: 450 -?50s editions; 250 ?60s editions; and 100 ?70s editions. Each has its own specific details. The ?50?s Edition models comes finished in Black with a Tan interior and specific wheels; the ?60s Edition features a Denim Blue Exterior and matching interior trim with two tone seats; the ?70s Edition Convertible is sprayed an exclusive Toffee Brown and sports chrome-look disc wheels. 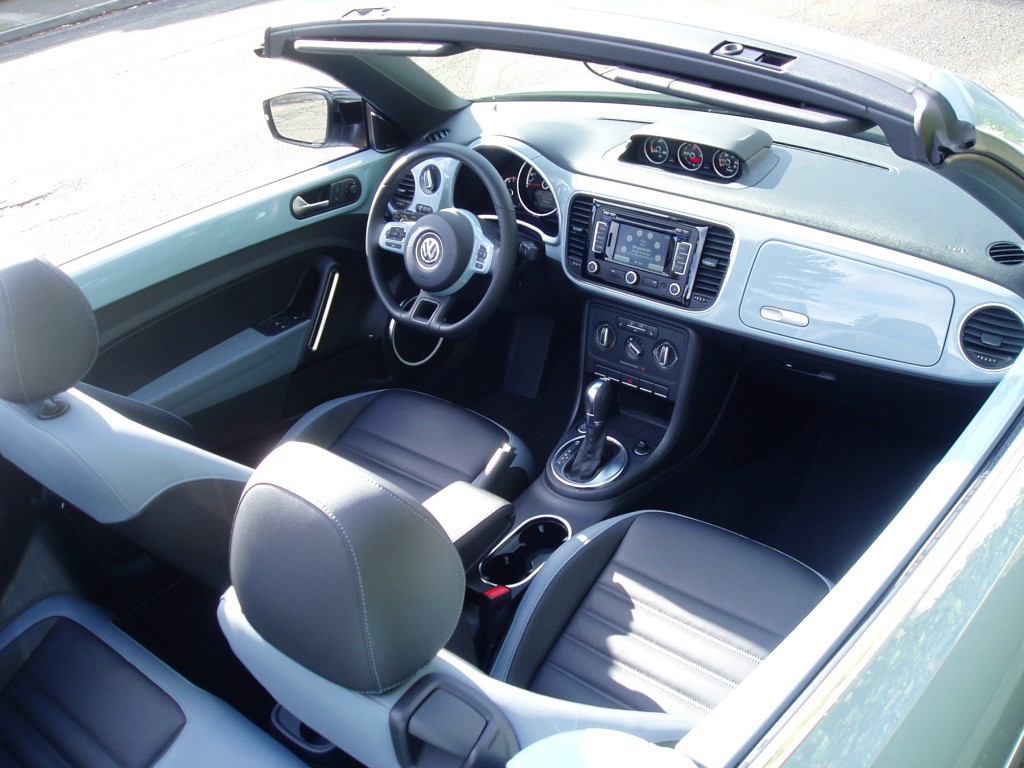 The interior features a theme built off that of the Coupe. There are two glove boxes and the rear seats are split and fold flat, allowing for carrying bulkier items. There?s also an auxiliary instrument package positioned above the audio/navigation system that includes an oil temperature gauge, a sport chronometer and a boost gauge that comes as standard fare on Turbo and TDI Clean Diesel models. 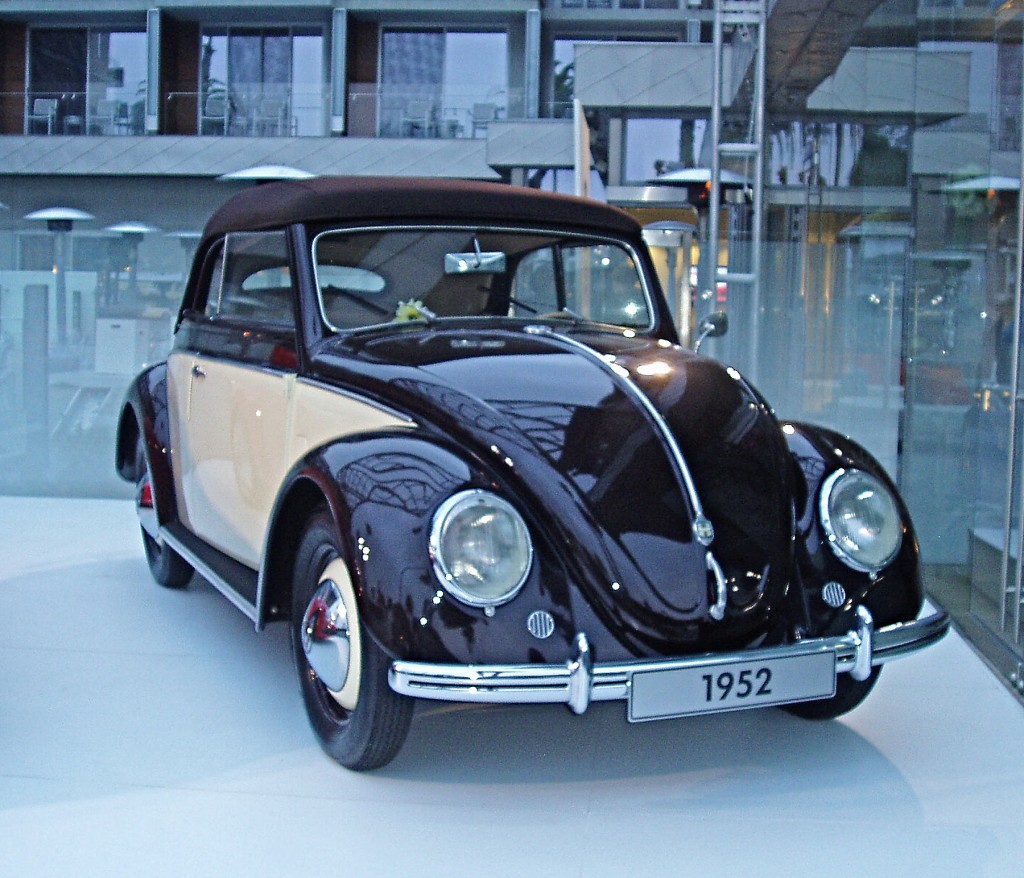 Since the type 15 Convertible from 1949, the Beetle has been one of the most popuar open-top cars ever built, with over 330,000 units of the first example manufactured over a 32-year span, with another 234,619 New Beetle Convertibles made in an 8-year period. 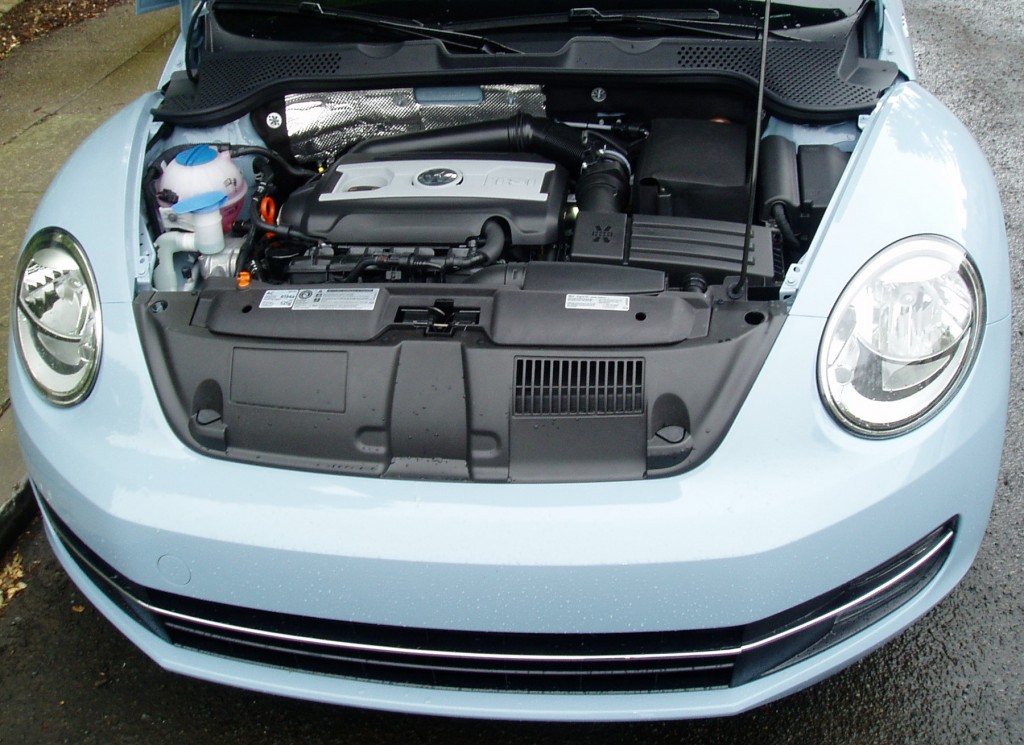 All Beetle Convertible models feature a strut-type front suspension with lower control arms and an anti-roll bar (22mm on all but the Turbo?s Sport suspension where it?s increased to 23mm). All models come with standard ABS and EBD. Turbo models come with an XDS? cross differential (limited-slip) system for improved traction. Other safety and security features include: VW?s advanced Intelligent Crash Response Syatem that shuts off the fuel pump, unlocks the doors and switches on the hazard lights should the vehicle the vehicle become involved in certain types of collisions.

My driving partner and I were able to experience virtually every version of the 2013 Beetle Convertible lineup except the Diesel.? We spent the most time in a Toffee Brown with Tan top, 2.5-liter ?70s Edition. I later spent more time in the Denim Blue, with Black top ?60s Edition with its turbo power. It was equipped with all the available options: a multi-function leather-trimmed steering wheel; keyless access with push-button start, leather seating (heated up front); the RNS? 315 navigation system; award-winning Fender? Premium Audio System; and Sirius/XM satellite radio. It was base-priced at $32,295 while the final total came to $33,090 after options and Destination charged were tallied. 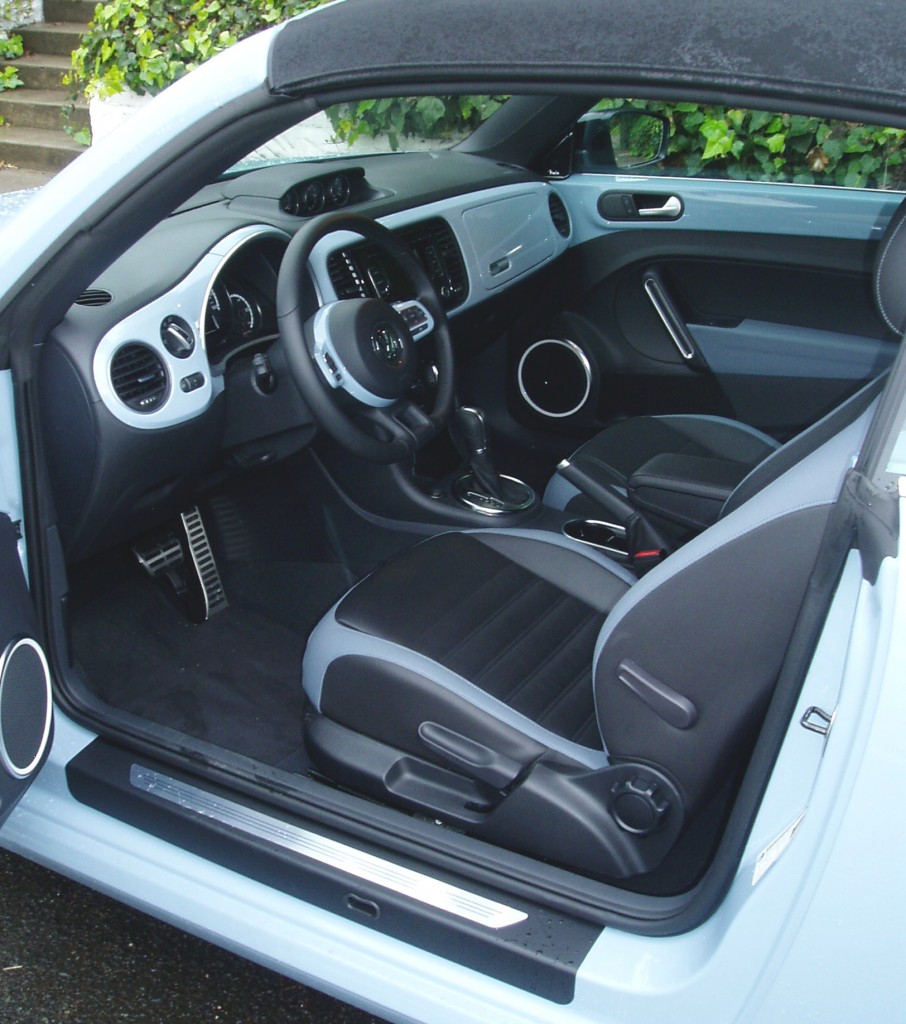 SUMMARY: Obviously, due to the limited production of the decade-themed Special Edition models, not everyone will be able to acquire one. Not to worry,? all powertrains and most colors will be available for purchase. My personal favorite in terms of performance was of course, the ?60s Edition in its fully loaded state.

The 2.0-liter Turbo lays rubber off the line and handles superbly. It is comfortable as well as great fun to drive, especially with the six-speed DSG transmission. The ?70s Edition?s exterior color is unfortunately not available on other models (at least not yet). And the 2.5-liter five-banger delivers an exceptionally smooth operation and is perhaps better suited for more mundane driving practices. 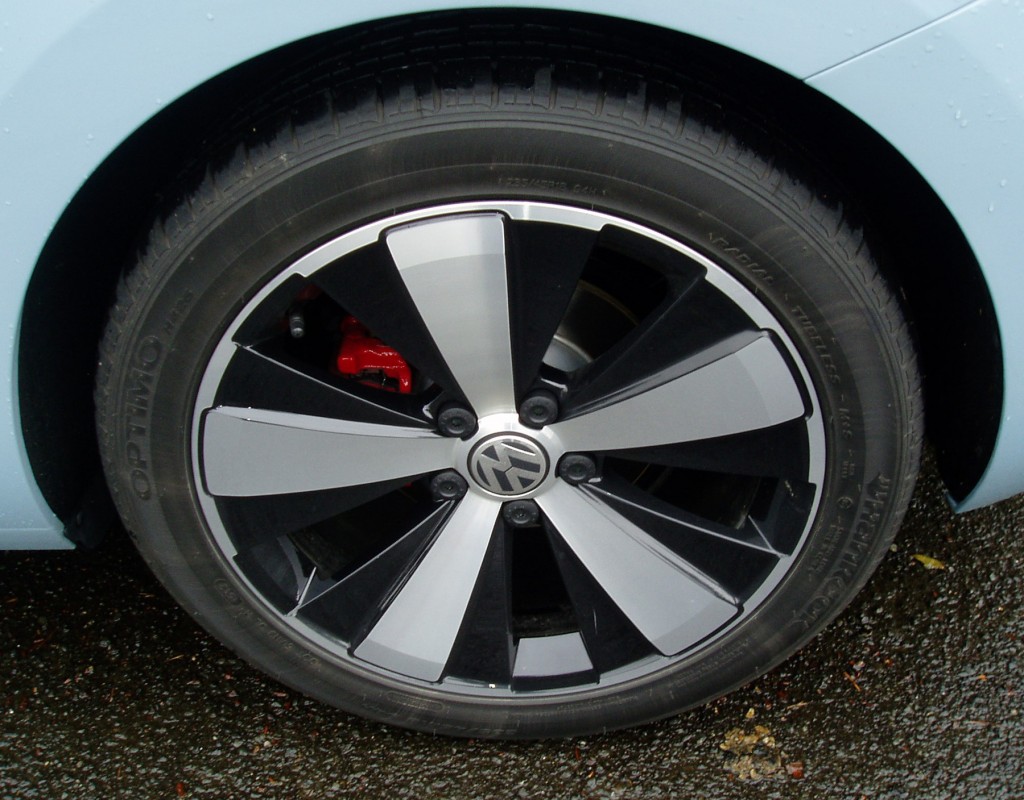 In the final analysis, any of the ?2013 Volkswagen Beetle Convertible models is sure to deliver lots of smiles – all versions are ?hands down and top down? winners. Actually, they?re pretty cool with top up as well, and VW?s Carefree Maintenance Program is a major plus in ownership.