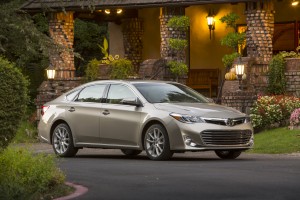 Yountville, Calif. — Have you heard about Avalon?? If you recall, she was the plain Jane daughter of the Toyota family, kind of frumpy, but smart and talented.? She just didn?t have the bling or the personality to make her very popular, so when she turned 17, the Toyota family sent her away to finishing school for a makeover.

She just arrived back with the family and wow, she looks great and she?s bubbling with personality.

Okay, so I?m no Danielle Steel or James Paterson, but you get the idea, Toyota has reengineered and redesigned the Avalon and it not only looks great, but it?s like a different kind of car.? Still designed with the family in mind, it now makes a fashion statement and can put a smile on the driver?s face. 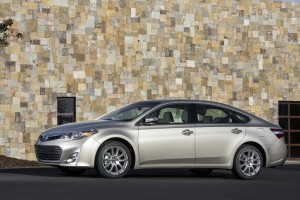 ?The point of the 2013 Toyota Avalon is to show the market that ?Toyota is back!? It will lead the charge for great styling, great handling performance, and the highest and best level of technologies,? said Randy Stephens, Chief Engineer of Avalon.

Toyota?s Caltry design studios have worked their magic and tightened up the 2013 Toyota Avalon body making it more assertive looking and a bit smaller, but without compromising the spacious interior. ?Distinguishing design features include an innovative and industry first Quadrabeam? headlight cluster that takes up less space and fills out the light pattern for better nighttime visibility.? A large grille creates an entirely new ?look? for the Avalon adding to the assertive look, plus improving pedestrian impact protection.

The sides have more dimensional sculpting, which enhances the new look while improving the wind flow to reduce the coefficient of drag to a low 0.28 cd, which in turn improves highway speed stability and improves fuel economy. 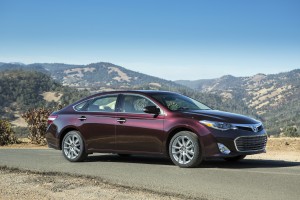 ?????????? The front-wheel drive 2013 Toyota Avalon now comes in both a traditional gas drivetrain, or as a hybrid.? The stock gas engine, which is likely to be the choice of four out of five buyers, is Toyota?s stalwart 268 horsepower 3.5-liter V-6.? It?s mated with a six-speed automatic transmission, which has steering wheel-mounted paddle shifters to provide a sportier configuration that should appeal to younger drivers.?? The combination accelerates from 0 to 60 in only 6.7 seconds. Fuel economy is rated at 21 mpg city and 31 mpg on the highway.

The Avalon Hybrid Synergy Drive is powered by a 156-hp, 2.5-liter Atkinson cycle four-cylinder gasoline engine.? It?s attached to a hybrid transaxle that acts as a power-split device between the gasoline engine and the two high output electric motors housed in the transaxle. ?A modified CVT (Continuously Variable Transmission) allows for switching between or combining propulsion sources. ?One of the motor/generators is driven by the engine, and it functions as a starter plus it generates the power, along with regenerative braking, to operate the second electric motor/generator and to charge the hybrid battery. ?Combined, the gas engine and electric motors produce 200 horsepower.? Zero to 60 mph acceleration takes about 8 seconds and the system has an EPA fuel economy rating of 40 mpg city, 39 mpg highway and 40 mpg combined.

Starting with a more rigid platform the re-engineered four-wheel independent suspension utilizes Macpherson struts in front and a dual-link rear system.? The resulting ride and handling characteristics are surprisingly stiff compared to the previous generation.? The car feels agile and responds quickly with good feedback, especially for a large sedan.? When asked about the significant change in the suspension, planners didn?t think this new stiffer ride would be a deterrent to current Avalon owners. 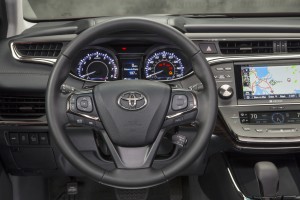 ??????????? The gasoline-only powered Avalon is available in four trim levels: XLE, XLE Premium, XLE Touring and Limited.? Pricing ranges from $31,750, including the destination charge, for the XLE to $40,410 for the Limited.? The Hybrid comes in all the same trim levels except the base XLE.? The XLE Premium model hybrid is $2,360 more than the gas version and the Touring and Limited hybrid versions are only $1,750 more.

To use some Oldsmobile-speak, the new Avalon is certainly not ?your father?s Avalon?.

The car is roomy, luxurious, good looking and a lot more fun to drive than the previous generations.? Toyota certainly provided the keys to a new and younger market, and if they can get them into to drive it, they could have a hit on their hands.?? ?????????? 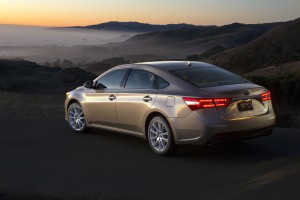