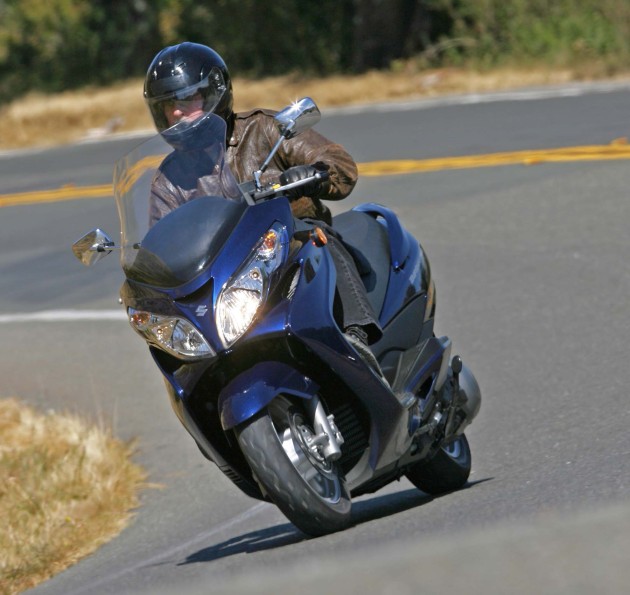 The Burgman from Suzuki has been around for a few years now, available as both a 400 and a 650 model. What is a Burgman you might ask? It?s a high-end scooter made by Suzuki. Incidentally, it?s no ordinary scooter either ? it falls into the ?Maxi? or ?Super? scooter genre. The 2013 Suzuki Burgman 400 ABS is the affordable entry level scooter.

Burgman seems like a rather unlikely moniker for a Japanese-produced two-wheeler, so in the interest of investigative journalism, the question was fielded as to how the name originated. The answer? It originated from the German term ?Burg? which stands for a town or village governed by a leading man. It may make sense to some, but not sure what it has to do with the price of rice in China (whoops, Japan). Enter the 2013 Suzuki Burgman 400 ABS scooter. 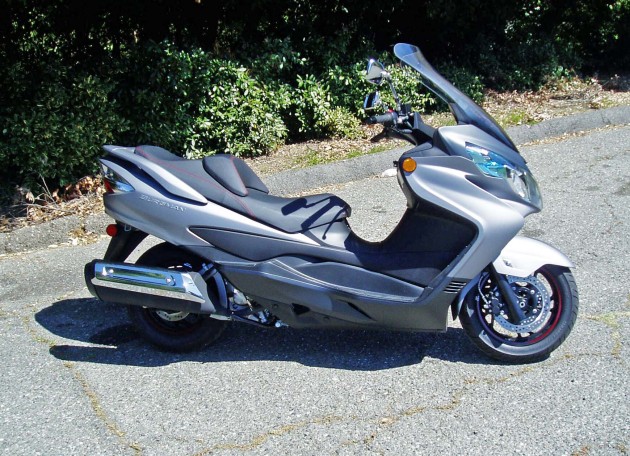 Despite where the Burgman name came from, the Suzuki Burgman line of scooters delivers an extraordinary ride. When viewed from the front, it looks for all the world like a sport bike, but in profile, it definitely takes on the persona of a scooter, with no visible engine and a traditional step-through mounting. There are a host of maxi or super scooters available in today?s marketplace, ranging from 400 cc to 650 cc in displacement, but the Suzuki Burgman line seems to rank a cut above the others in terms of its design execution. 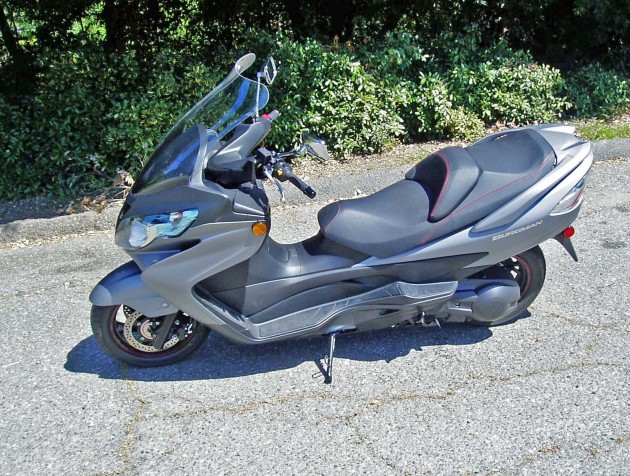 We?ll deal here with the 2013 Suzuki Burgman 400 ABS model, whose light, rigid chassis and sleekly styled, curvaceous body work, not only gives the scooter a sporty appearance, but an aerodynamic advantage as well at higher freeway speeds (Yes, the Burgman scooters are definitely freeway legal). The headlights are widely-spaced ?cat-eye? affairs, and the rakish windscreen, which is electrically height adjustable, add to the purposeful sport bike appearance up front, creating a smooth air flow over the rider, while the updated taillights wrap deeply into the body sides for a clean effect. 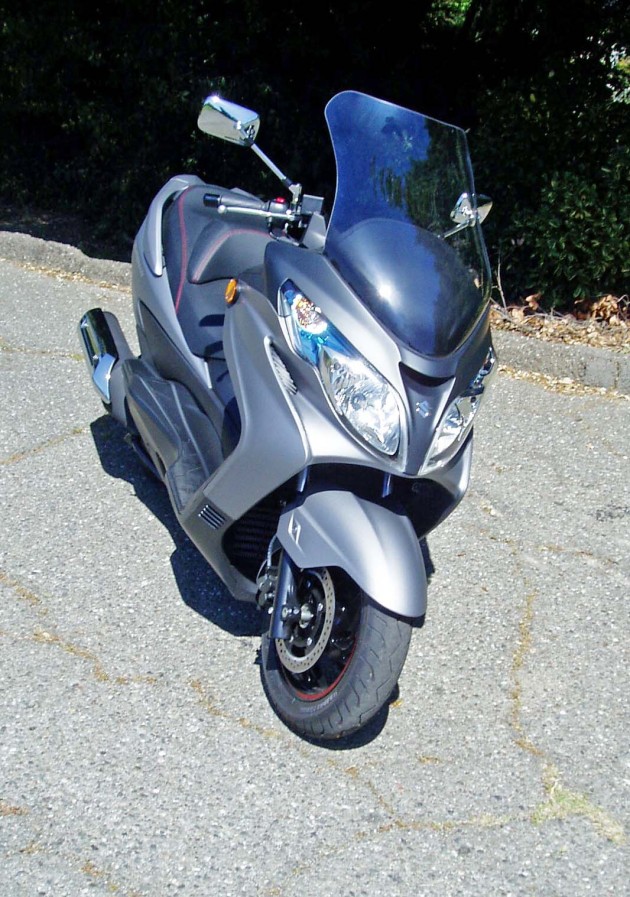 Motive force for the 2013 Suzuki Burgman 400 ABS comes from a 400cc four-stroke, liquid-cooled, DOHC, 2-valve, single-cylinder with electronic fuel injection. Power is delivered to the rear wheel through Suzuki?s Electronically Controlled Continuously Variable Transmission (SECVT? – automatic) via a final gear drive, that at first glance appears to be a shaft drive assembly. The 3.8-gallon fuel tank allows for a satisfying reach that consistently measures in the range of 150 miles. 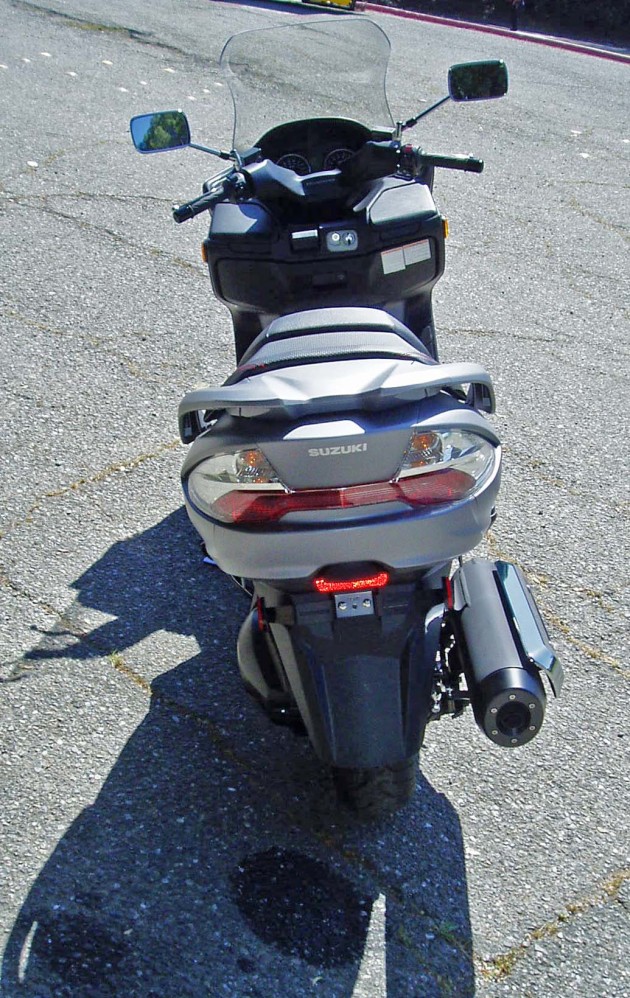 The Burgman 400 rides on Bridgestone Hoop tubeless rubber ? 15-inch up front and 13-inch in the rear, mounted on 5-?Y?-swirl-spoke alloy wheels. Front suspension consists of telescopic forks with coil springs and oil damping and 4.3-inches of travel. The rear suspension is of a Swing arm, link-type configuration, also with a coil spring, oil damping and adjustable pre-load. Rear suspension travel is 3.9-inches. Bringing the Burgman 650 to a halt is handled by hydraulic dual discs forward, and a single disc aft. ABS braking is an option on the Burgman 400.

Wheelbase of the Burgman 400 measures 62.8-inches, with the overall length registering 89.4-inches. It weighs in at 489 pounds dry and the stepped dual seat (which is designed to carry both rider and a passenger in comfort), height is 28-inches. The kick-up to the pillion level surface provides lumbar support for the rider, and there is a small riser for the passenger, as well as side handgrips and floorboards. 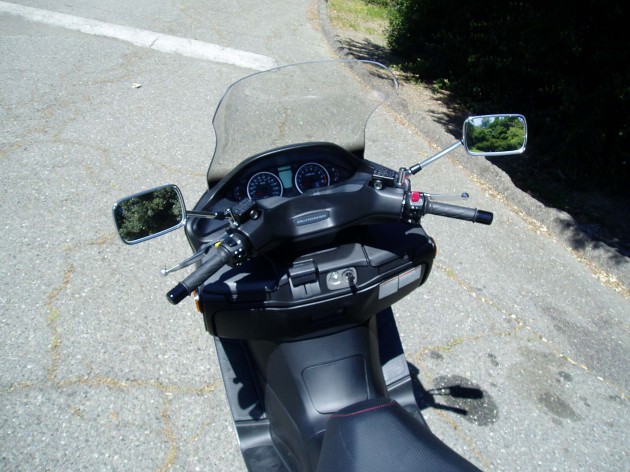 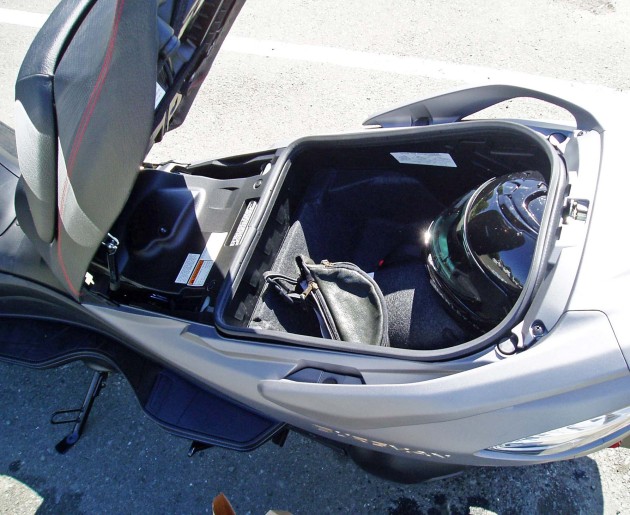 Additional thoughtful and useful features include: an easy-to-operate parking brake lever, and dual stands — a center stand, as well as a side stand. Lots of secure storage is provided too, with the bodywork ahead of the rider providing three lidded storage compartments and a DC power outlet for charging cell phones or operating a radar detector (yes Virginia, the Burgman 400? is capable of exceeding the speed limit), or how about a GPS unit? Wait, there’s more ? there?s also a 6.2-liter lighted, locking storage beneath the seat assembly, capable of stashing two full-face helmets, with a smaller compartment alongside. Should one require yet more storage space, simply attach extra gear by utilizing the handy tie-down hooks. 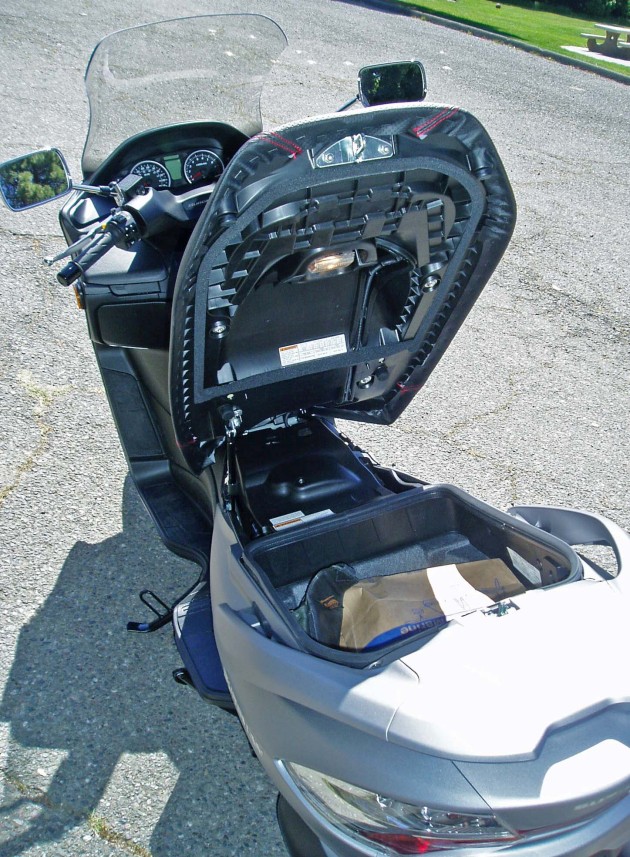 The riding position is exceptionally comfortable aboard the 2013 Suzuki Burgman 400 ABS, with plenty of room to stretch out the rider?s legs. The ignition switch features a tamper-resistant magnetic cover, along with a special cut-away section that allows for the use of a chain-type lock for securing the frame and bodywork to an immovable object. There?s also a fork lock.

My test 2013 Suzuki Burgman 400 ABS scooter includes all of the standard features and equipment found on the base Burgman 400, while adding: the advanced antilock braking system and chrome exhaust cover. My test scooter featured Thunder Gray metallic and Sparkle Black and Black bodywork with black upholstery. The base price was set at $7,899 while estimated dealer prep and handling (which can vary more or less) elevated the final total by roughly another $200. to $8,099. Combined mileage during testing came to 51.5-mpg.

SUMMARY:? Obviously, there are lots of testosterone loaded male riders who shudder at the prospect of being seen aboard a scooter of any size, shape or form, but? trust us, there?s nothing wimpy, or to be ashamed of about riding the Burgman 400 ABS. Okay, so there?s no big V-twin ?potato, potato, potato exhaust note, but the fuel economy delivered by the Burgman is a heck of a lot better, and your neighbors won?t be annoyed when you fire up to take off on an early Sunday morning ride. There?s also no clutch or foot brake to concern yourself with either. Both front and rear brakes are operate by handlebar-mounted hand levers.

The CVT automatic transmission provides a smooth, steady speed progression with no shifting.

The balance is superb and the ride quality is smooth, despite the fact that the rear suspension pre-load was left alone. Had it been adjusted, the ride would likely have been even smoother. Acceleration is responsive, and the 400 is comfortable cruising in the 55-65 mph range, with room to roll on more throttle.

If manly men can get past the potential threat of emasculation by riding a scooter, they should give it a try, they?ll likely be pleasantly surprised?and pleased. It?s actually a lot of fun, and isn?t in the least gender or age specific. It has more power to offer than some motorcycles, is more comfortable and more economical to operate as well. 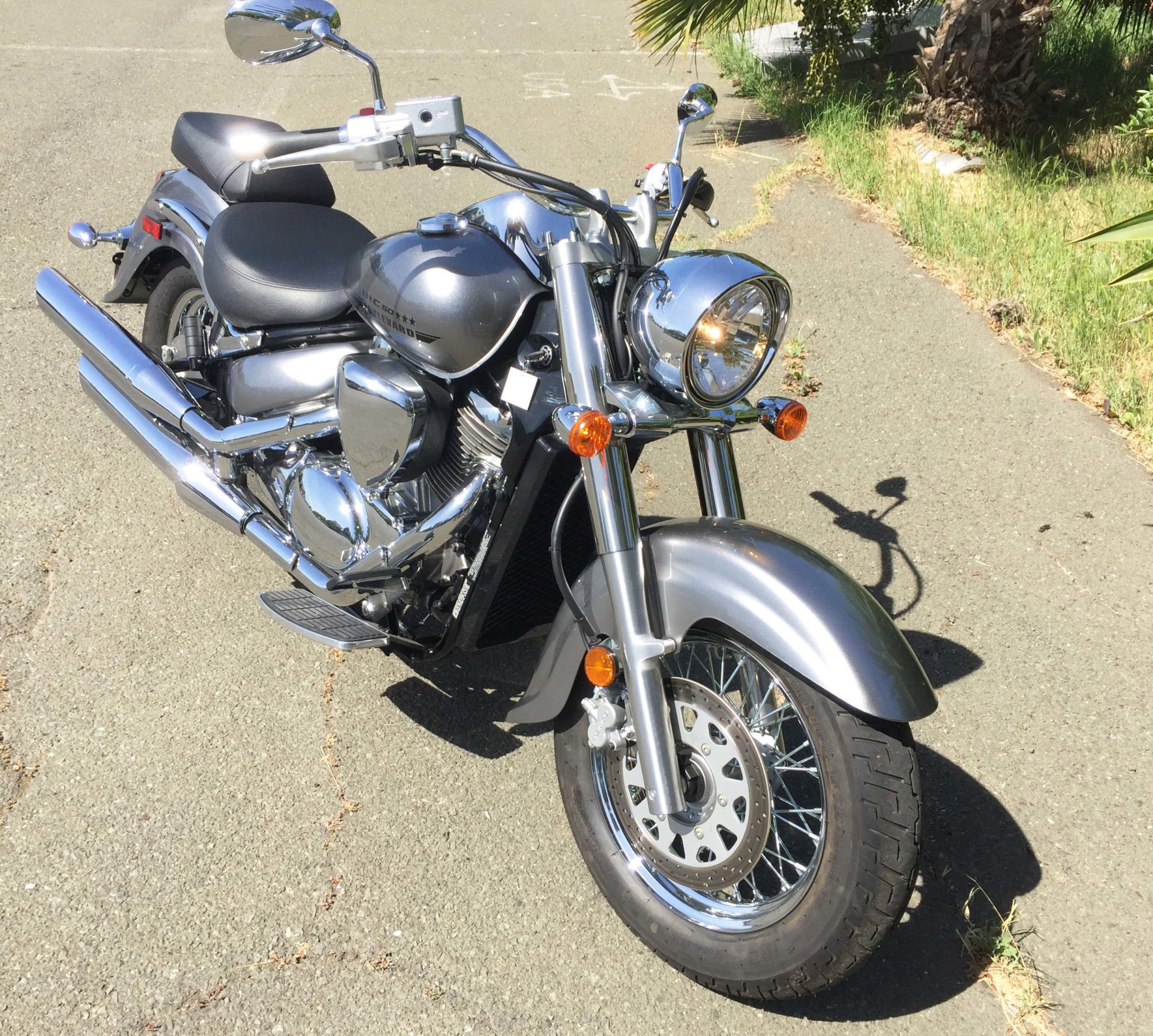