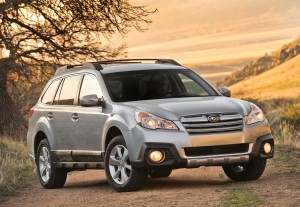 In the Northwest, where we live, the Subaru Outback is nearly as predominant as yellow taxi?s in New York City. The Outback simply makes good sense with its standard all-wheel drive, car-like ride and its ?bulletproof? reputation.? It?s a car that seems to be ready for all situations without having to change equipment or make adjustments.

We are regularly asked for car buying advice, and the one car we have recommended to more people than any other is the Outback.

For 2013, the Outback gets a facelift with changes to the front end including headlights, grille, bumper and fog lights.? However, the biggest changes are under the hood and in the new technologies column. ? 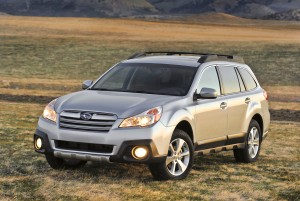 The base engine is a four-cylinder boxer (four horizontally-opposed cylinders aligned parallel to the ground) rated at 173-hp.? That?s three horsepower more than the last four-cylinder engine, but the big difference is that the new engine produces more low-end torque across a broad operating range, so it feels more responsive.?? The 2.5i models are equipped with the new engine and a choice of a six-speed manual transmission or Subaru?s second generation CVT (Continuously Variable Transmission).

The CVT comes with wheel-mounted shift paddles for better control and it doesn?t have the vague feel of some of the other CVT transmissions we?ve driven.? With an EPA fuel economy rating of 24 mpg city and 30 mpg highway, the new drivetrain is a couple of miles per gallon better than the previous generation.

The most significant technological advancement is the EyeSight Driver-Assist System, which combines a variety of safety enhancements including Adaptive Cruise Control, Pre-Collision Braking and Vehicle Lane Departure Warning.? It?s sold as part of a larger option package which includes a moonroof, navigation system and premium audio.? The package also included other features like rear vision camera, HomeLink, satellite radio and navigation plus Bluetooth.? The add-on price for the works is only $3,940. 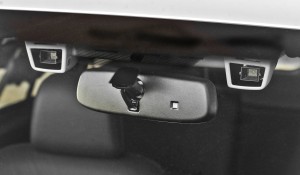 The EyeSight system uses a couple of conspicuous cameras mounted on the interior ceiling on either side of the rearview mirror.? The two cameras provide a wider detection angle than most radar-based systems.? At speeds below 19 mph, the system is capable of detecting pedestrians or objects in the vehicle?s path and can activate the braking system to mitigate or even avoid the collision. Under certain circumstances, Eyesight is able to bring the car to a complete stop.

At relative speeds above 19 mph, EyeSight can apply the brakes when an object is detected, and will attempt to brake if the driver doesn?t take evasive action, or does not brake hard enough to avoid collision damage.

The system will also warn the driver when the car wanders outside the lane without using a turn signal or if the vehicle begins to sway.? The Adaptive Cruise Control works from 1-87 mph and can fully brake the vehicle to a stop if the system ?locks on? to a vehicle ahead.? As an added convenience, Adaptive Cruise Control assists the driver in heavy ?stop and go? freeway traffic by maintaining a safe distance from the vehicle ahead.? In stop-and-go traffic, when the vehicle in front starts to move again, EyeSight will also alert the driver if he or she doesn?t react within a few seconds. ?The technology can also help reduce collision damage by cutting the throttle when it senses an obstacle in front, and the driver fails to slow.

We didn?t try any of the potential crash situations, but the features like the Adaptive Cruise and lane departure warning worked great and didn?t require a lot of extra effort from the driver to activate. 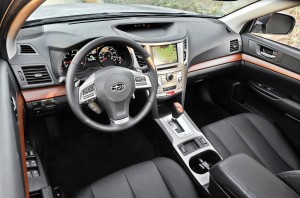 Our test car was the top model, 2013 Subaru Outback 3.6R Limited, which included a high level of premium features consistent with an entry luxury vehicle.? A 3.6-liter six-cylinder boxer engine rated at 256 horsepower powers it.? Like all Subaru sedans and wagons sold in the U.S., it has the symmetrical all-wheel drive system.?? Each of the three drivetrain configurations use a different system tailored to maximize traction.? The 3.6R uses a Variable Torque Distribution (VTD) AWD system with a 5-speed electronic automatic transmission. ?Under normal conditions, this system sends more power to the rear wheels (45 percent front and 55 rear) to enhance handling agility, and it can continuously adjust power distribution in response to driving and road conditions.

The six-cylinder engine accelerates from 0 to 60 mph in 6.1 seconds and has an EPA fuel economy rating of 18 mpg city and 25 mpg highway.? We averaged 23.4 mpg during our week behind the wheel.

The 2013 Subaru Outback 3.6R Limited has a substantial feeling, but is still agile and fun to drive.? The steering is responsive and gives good feedback to the driver and it has a tight turning radius of 36.7 feet, much better than many all-wheel drive cars. The ride is comfortable without compromising the handling characteristics. ?Moreover, we were impressed by all the innovative new technologies. 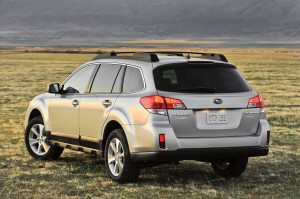 We?ll definitely be continuing to recommend the Subaru Outback, especially to the people who live in the northern climates and mountainous areas.