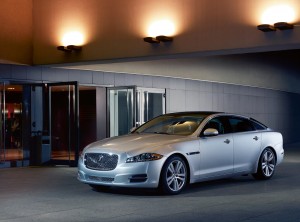 Montreal, Canada ? Growing up in Montana, my favorite pastime was driving.? I?d drive to the next city just to pick up milk for mom, and in Montana that can be a long drive.? Okay, that?s a slight exaggeration, but not by much.? In the 60?s, in that part of the country, winter usually lasted about nine months of the year, so I got to spend a great deal of time driving on snow and ice, and it became one of my favorite types of driving and I still enjoy it today.? It requires a bit more finesse, patience and forethought.

So, when Jaguar sent an invitation to go to Montreal in December to drive the new all-wheel drive 2013 Jaguar XJ and XF sedans I was thrilled.? I knew that probably meant driving on snow or ice in a couple of my favorite luxury sedans.

The first day of the trip was spent driving the new Land Rover LR2 over the river and through the woods, but that?s a completely different review.? The morning of the Jaguar XJ AWD drive started in the dark from the resort area of Mont Tremblant.? What a beautiful site, a dozen new 2013 Jaguar XJ’s sitting in a semi-circle outside the front door of the resort in the dark, headlights blasting through the large snowflakes that had started to fall earlier.? I stopped to take a photo, but only recorded glare and spots of light. 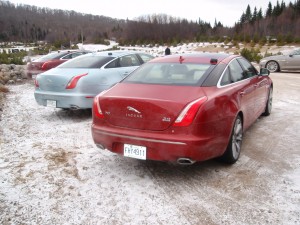 ???????? With a few inches of snow on the roads, I was in heaven as we started a drive to a facility used by various companies to do automotive testing.? Every time I drive in slippery conditions, I always do a couple of quick tests to ascertain how the vehicle will handle the limited traction.? The first is setting the speed at about 35 mph on a straight road, when there is no other traffic close.? I slam on the brakes to see how quickly the car will stop and whether it will pull or slide to the side.? The Jaguar XJ I was driving stopped quickly and straight as an arrow, with the Pirelli M+S winter tires it was wearing.? The standard tire is a Continental all-season but the Jaguar people provided a better traction tire for this program.

My second test is to accelerate full throttle testing to see if the car pulled to the side and how good the traction was.? The results were even more impressive than the braking test.? The car grabbled quickly with the traction control modulating slippage and it stayed straight, with no side pull.

At the snow-covered track I put the XJ through a series of tests provided for us; including a couple of slaloms, acceleration on a corner, braking, etc.? I also had a chance to drive it in some deep sand, which is a different kind of experience and great fun.? The new AWD system is beautifully engineered with excellent traction and handling.

All-wheel drive isn?t all that?s new on these two new sedans.? The engine and transmission are all new, too. ?The engine is a 3.0-liter supercharged V-6.? The engine is rated at 340 horsepower and it feels even stronger accelerating from 0 to 60 mph in just 6.1 seconds.? Top speed is limited to 121 mph and the fuel economy is estimated at 18 mpg city and 27 mpg highway. The engine employs a new Stop/Start system to cut fuel usage when the car is stopped for a traffic signal or in normal idle situations.? When the driver takes his or her foot off the brake with the engine stopped, a twin solenoid starter restarts the engine in less time than it takes the driver?s foot to move from the brake pedal to the accelerator and the change is subtle.? 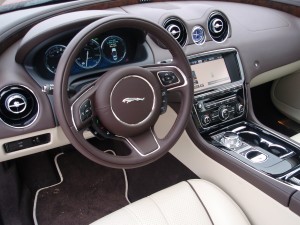 The new direct injected V-6 engine is based on the Jaguar V-8 engine.? The Roots-type vortex supercharger is mounted in the engine?s ?V? and uses a water-cooled intercooler to keep the intake temperature lower.

Also new is an eight-speed ZF automatic transmission tuned to meet Jaguar?s special needs.? The transmission not only improves fuel economy but also produces smooth quick shifts. ?The transmission has wheel-mounted shift paddles for those of us who like to be more in control.? The all-wheel drive transfer case is mounted on the rear of the transmission and it controls the power transfer to the front differential.? Like most AWD systems, this one transfers the power to the wheels with the best traction. The system defaults to 100 percent rear-wheel drive, until front traction is required.? The AWD is available only? on XJ and XF models equipped with the V-6 engine and is not offered with the V-8 models.

The 2013 Jaguar XJ is sold in a standard length or the five-inch longer XJL versions.? The extra inches are used for the rear seat of the limousine-like XJL to provide a luxurious space for rear passengers.? It can also be equipped an infotainment system, and a wide choice of leather and wood finishes to customize the area for the discerning owner. 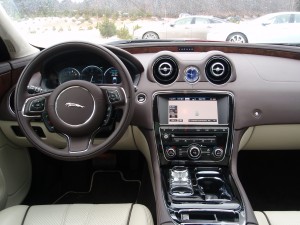 ?????? The new AWD is available with the abundant technologies derived from the rear-wheel drive and it maintains the same outstanding driving dynamics.? However, still the most impressive part of this new model is still the great styling. ?It?s a first class head turner and I don?t think there is any sedan that looks better than the XJ or XJL.

The big Jaguar is available in the XJ and XJL Portfolio AWD versions, which are priced at $77,575 and $84,575 respectively and include the destination charge.

For luxury car shoppers, living in the northern climate, or someone that likes to play in the sand, the new AWD Jaguar adds a great new option for the shopping list.

I also had a chance to drive the Jaguar XF AWD while in Canada.? The lighter weight and smaller size made it feel even more agile and even more fun than the XJ.? I look forward to getting more seat time in that one later.? 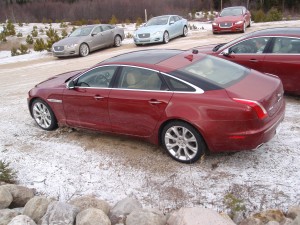 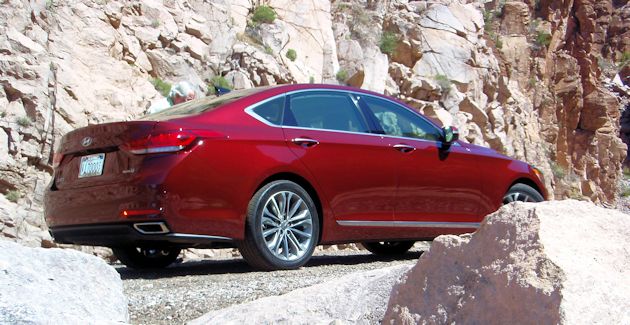 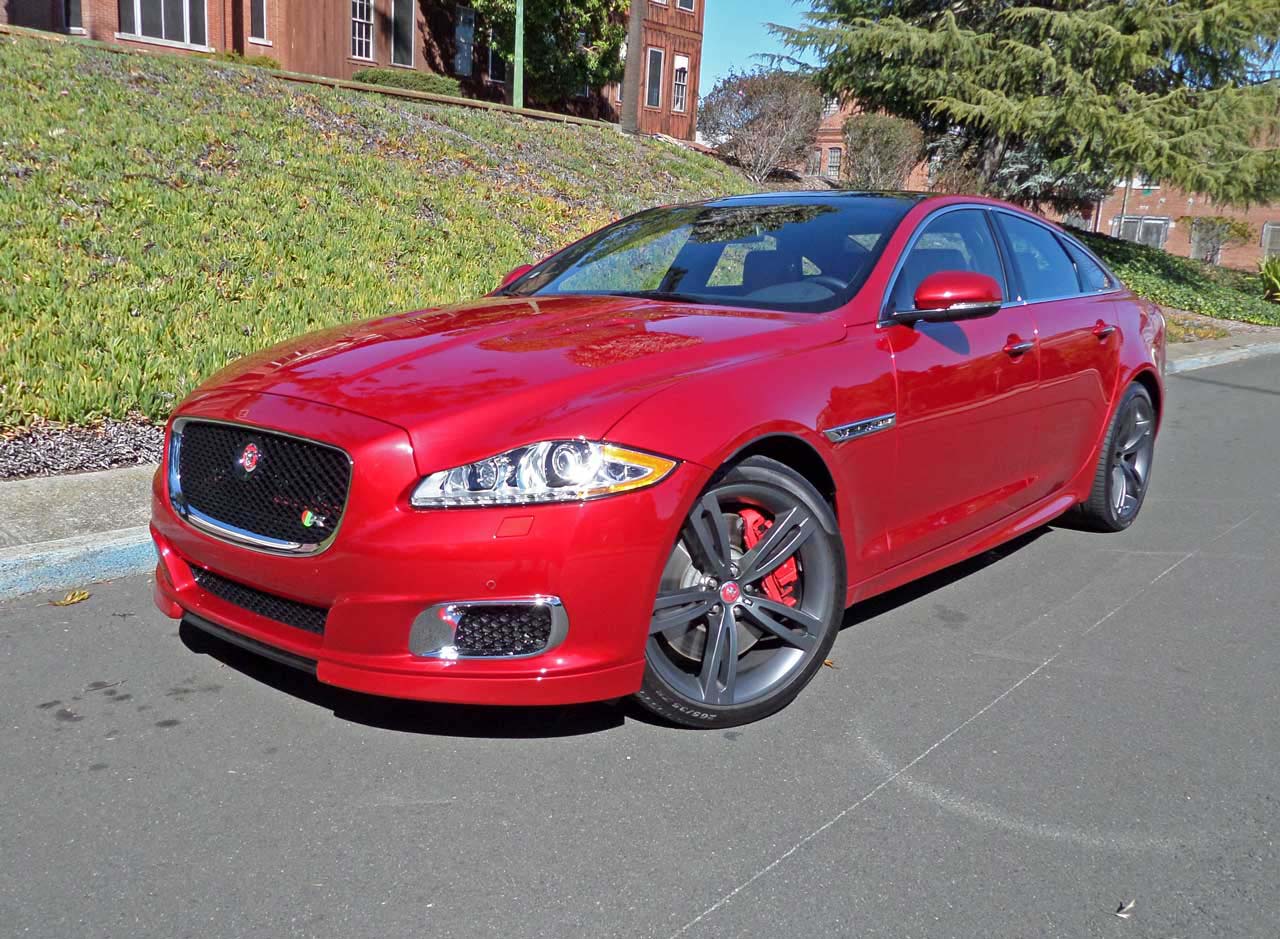