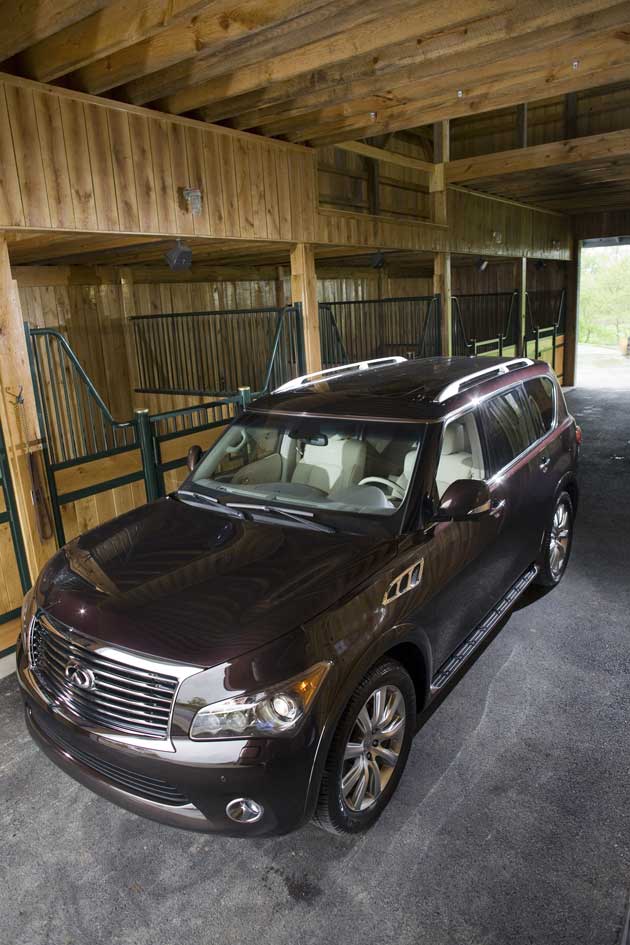 Environmentalists and ?do gooders? may shun and ostracize the big luxury SUVs because of their carbon footprint and lower fuel economy, but for anyone wanting to carry up to eight people in comfort or pull a trailer, they are hard to beat.

We hadn?t been in the flagship Infiniti SUV for some time, so it was nice to renew our acquaintance with the Infiniti QX56. After debuting in 2011, the big SUV has settled into a strong sales pattern for a niche product.

For 2013, changes have been subtle with only a new color option and making the advanced Moving Object Detection (MOD) system as a standard feature of the Around View? Monitor package. Automatic dimming exterior mirrors are also now standard. 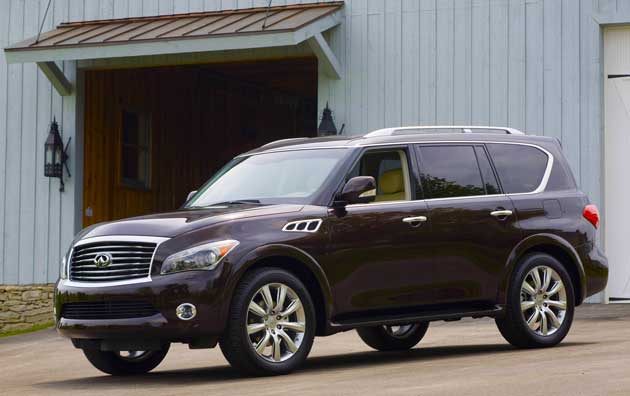 When it was first introduced three years ago, the QX56 design was portrayed as starting with two dramatic strokes from a Japanese calligraphy brush. It?s difficult to make such a massive vehicle look distinctive, but Infiniti designers were successful when they created the QX56. The ?look? includes a wave-like hood design, ?wide eye? headlights for the Xenon headlights and a multitude of elegant design elements. Front fender vents, a forward sweeping D-pillar and massive 20- and 22-inch wheels and tires complete the muscular exterior.

With a 400-hp, 5.6-liter V-8 engine, the QX has no shortage of power and proves it by making zero to 60 mph runs in just under 7 seconds. The V-8 gets much of its impressive power from the Infiniti Variable Valve Event & Lift (VVEL) technology and the efficiency of the Direct Injection Gasoline (DIG?) system. Power transfers to the rear wheels, or all four wheels, through Infiniti?s seven-speed automatic transmission. The EPA rates fuel economy at 14 mpg city and 20 mpg highway. We averaged 17.3 mpg during our week of wheel time. 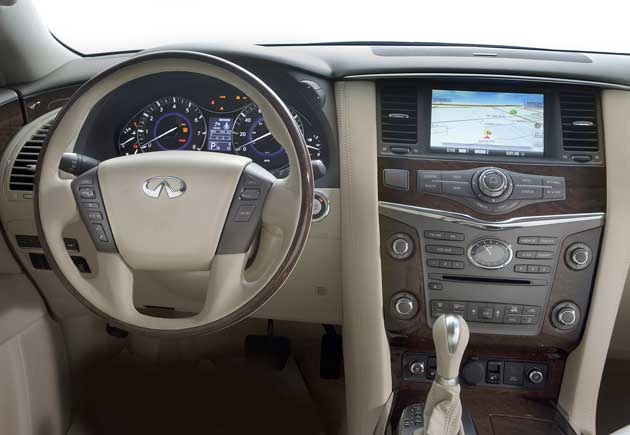 For owners with the need to pull a trailer, the QX handles up to 8,500 pounds, when properly equipped. To provide the best stability and handling characteristics for towing and cornering, the QX Deluxe Touring package includes a new Hydraulic Motion Control System that helps reduce body lean by transferring hydraulic fluid from one side of the vehicle to the other to counteract body lean and keeping. The system is combined with the double-wishbone four-wheel independent suspension system to maintain a uniform ground clearance and departure angle even when towing or loaded with cargo. It makes a noticeable difference in handling.

Where the QX56 especially shines is in the interior, where it?s every bit a luxury vehicle filled with soft leathers on all three rows of seats, Tuscan Burl trim and same kind of accoutrements you might expect to find in a corporate jet. It also comes with a high level of standard equipment like, auto dimming bi-Xenon headlights, 13-speaker Bose audio, 9.3GB Music Box? hard disk drive and even a navigation system. The navigation system includes real-time traffic and weather information and the Zagat Survey? restaurant guide. 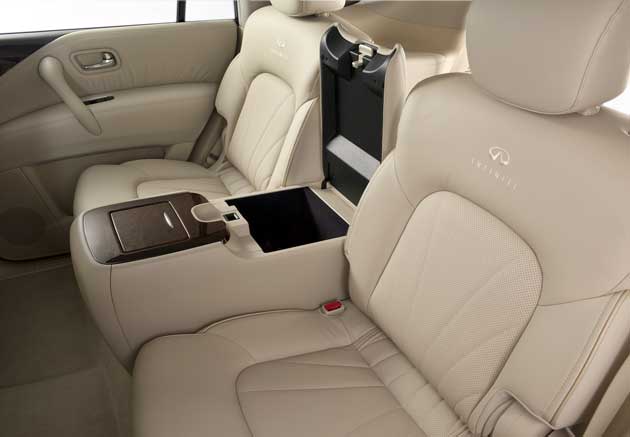 One of the new standard safety features we think is particularly helpful is the Around View? monitor that displays a virtual 360-degree view around the vehicle. It is especially helpful for parking and could be handy when going through tight areas in the woods or a parking lot.

The QX56 is available in one very-well equipped model, with a choice of two- or four-wheel drive. Prices start at $62,345, including the destination charge, for the two-wheel drive and $64,740 for the four-wheel drive. Selecting the Technology, Theater and Deluxe Touring packages along with a $2,450 tire and wheel package and cargo area accessories can add as much as $13,200 to the bottom line. However, the result is one of the largest, most plush and technologically advanced SUVs on the road. 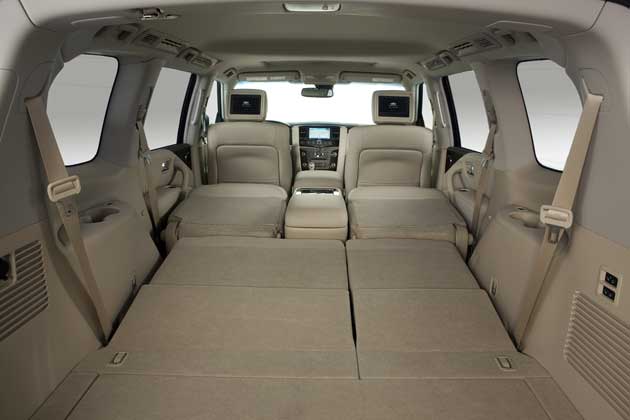 Driving the 2013 QX56, we got to experience the excellent performance associated with nearly three-ton vehicle along with the comfortable setting provided for the passengers. It makes a great cruiser and people hauler, but does require a larger parking spot and maneuvering space in parking lots.

We think the 2013 Infiniti QX56 is one of the best big luxury SUVs on the market and a definite ?must drive? for anyone who needs a full size luxury SUV. 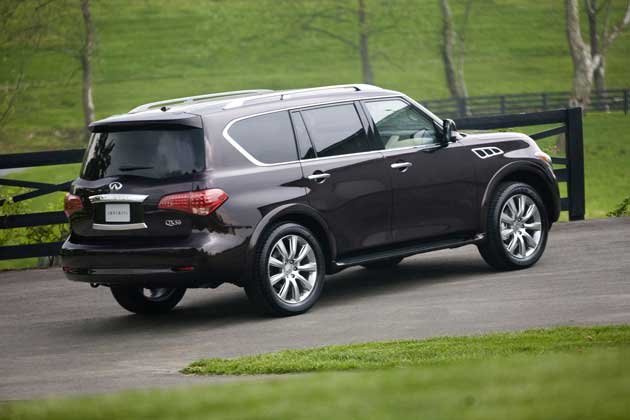 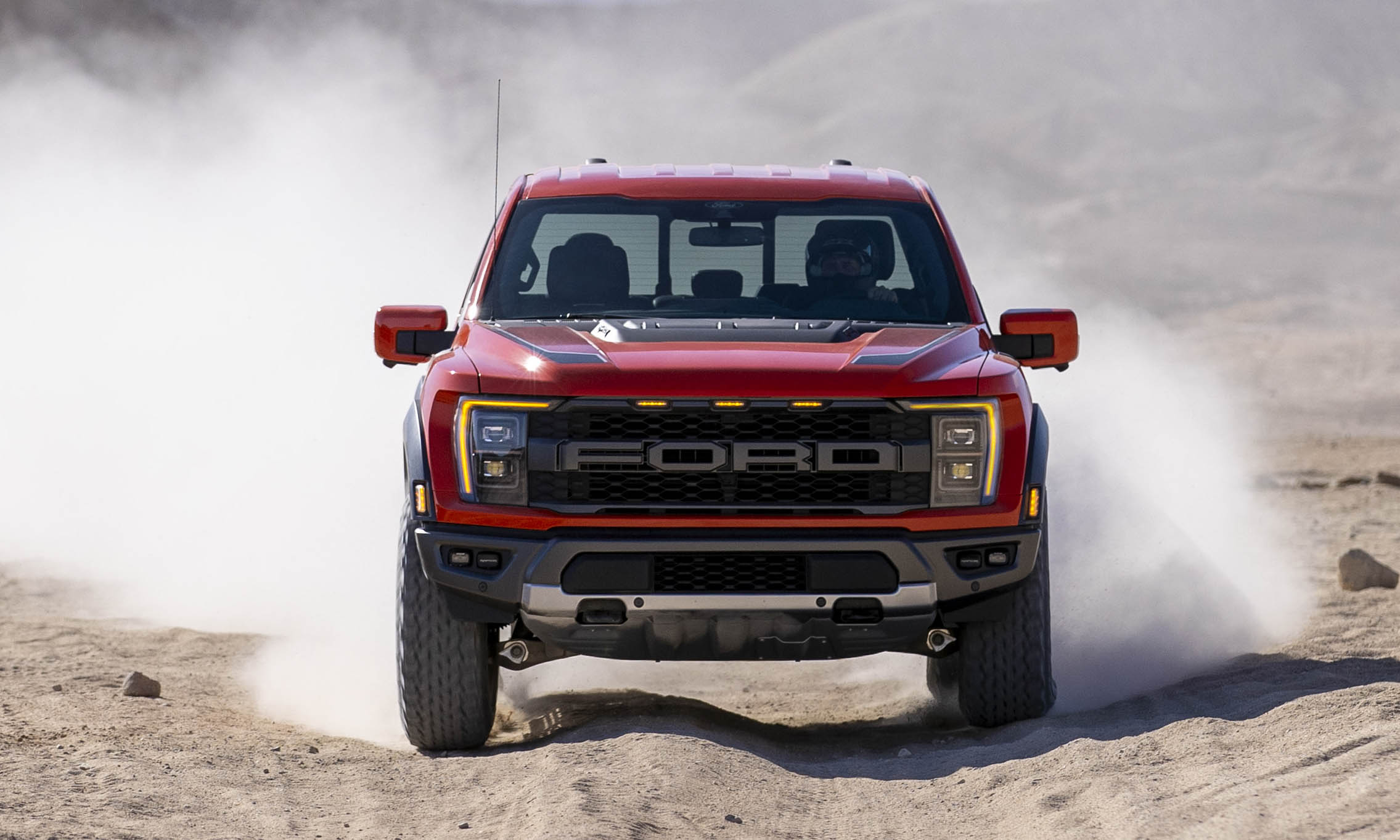 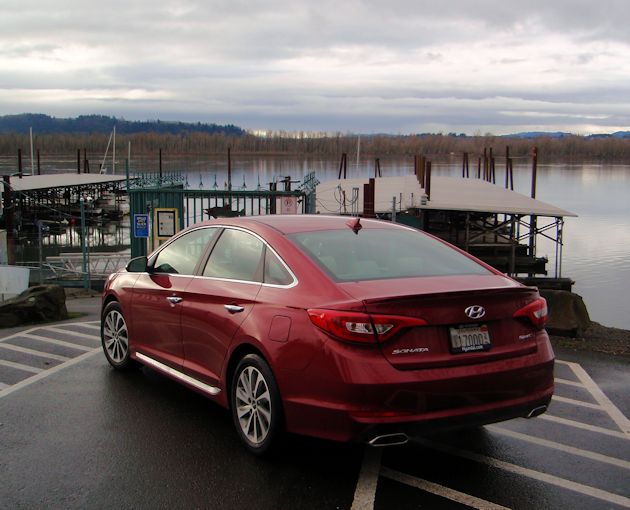