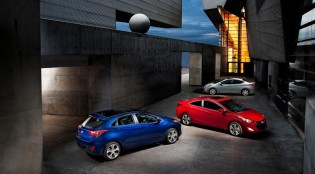 Looks is one of the most important factors influencing the new car buying decision.? If the car doesn?t look good, it?s going to be hard to get the consumer into the car to drive it even if it?s one of the best cars on the road.

Hyundai has illustrated this point in the last few years by building some very good looking cars and SUVs.? It?s hard to argue with the success of the Hyundai Sonata, for example.? The styling is great and that got people into the car where they found all the other elements that make a good car like quality, comfort, efficiency, performance and value

The Hyundai Elantra sedan, introduced last fall, followed the same formula, and within months they seemed to be everywhere.

Not resting with the success of the Elantra sedan alone, they immediately took the next step and added two more models to the Elantra lineup, the Coupe and the GT (a five-door hatchback).? Coupes typically have fewer takers with most people favoring a more practical sedan.? And I?ve never understood why Americans seem to an aversion to hatchbacks.? Personally, they?ve always been my favorite because of the utility, extra space and often the styling.

This summer Hyundai added these two new Elantra models to their menu and I think we?re about to see a flood of them on the roads.

The 2013 Hyundai Elantra coupe?s dramatic styling is a head turner.? It takes the same dynamic Fluidic Sculpture design principles that were the basis for the Sonata and Elantra sedans and 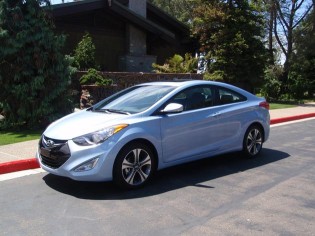 The 2013 Hyundai Elantra coupe?s interior has the same dash and instrument panel as the sedan with its flowing lines on the dash and hour glass shaped center stack framed in a brushed aluminum look.? The dash and controls have a free-form layout that looks great while providing the driver with easy to find controls.? As on the outside, the interior looks much richer than the price would indicate. ?The interior has abundant storage spaces for drinks and things, plus it supports the latest technologies like Bluetooth?, auxiliary iPod and USB ports, and speed sensitive volume control on the audio system all as standard equipment.

Like most coupes rear seat entry requires a limber body and yoga-like moves, but the Elantra Coupe requires a less sophisticated yoga position than most others.? The doors open wide, the front passenger seat slides forward and once in the seat it has better knee, shoulder and head room than most.? It?s actually designed to hold a real person. ?Evidently designers didn?t get the memo that says coupe trunks should be small, because this car not only has a giant 14.8 cubic feet of cargo room, but the 40/60 split rear seatbacks fold to expand the space. 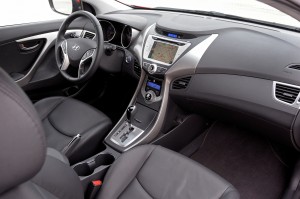 Like the sedan, which was the “2012 North American Car of the Year? and gets a top Consumer Reports rating, the Hyundai Coupe is one of the best driving cars in the category.? The electric steering is right on and the suspension offers an excellent balance between control and ride.? I also thought the road noise was less than many pricier cars.

The 2013 Hyundai Elantra Coupe is available in two trim levels, GS and SE, which are priced at $18,220 and $20,520.? The automatic transmission adds $1,000 to either model. ??The SE trim adds features like 17-inch alloy wheels, sport-tuned suspension, power sunroof, leather seating and several other cosmetic enhancements.? The only option is the Technology Package, which adds navigation, rearview camera, premium audio, push button start and a few other convenience features for $2,350. 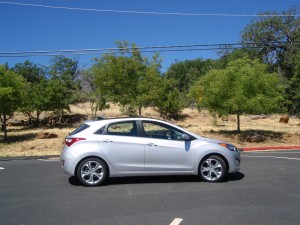 Starting with the same Fluidic Sculpture of the Coupe and Sedan, designers have created a functional five-door hatchback called the GT.? It adds a strong European flavor both in design and driving dynamics to the Elantra lineup.

The design integrates unique elements like another interpretation of Hyundai?s signature hexagonal grille, wrap-around projector headlights and integrated fog lights.? The sides wear a muscular treatment with strong character lines over the front wheel arches and then running down the side to meet with the rear contour lines.? Sixteen-inch alloy wheels complete the strong look and the optional 17-inch wheels from the Style Package ($2,750)? look even better. The rear facade includes a standard upper spoiler, wraparound taillights and a handy rear view camera concealed under the Hyundai badge.? When the car is shifted into reverse, the badge rotates exposing the camera and displaying the view on the center stack screen. I especially like this feature in the Northwest, where exposed camera lens always seem to get fouled by weather.

The 2013 Hyundai Elantra GT interior is different from the other models with brushed metallic trim on the doors, surrounding the vents and cascading down the borders of the center stack. The seats are a different design with more support than the other models.? The optional Style Package changes the seats to leather and heats the front ones.? The package also includes a massive panoramic sunroof that covers nearly the entire roof, sport-tuned suspension? and other convenience upgrades. 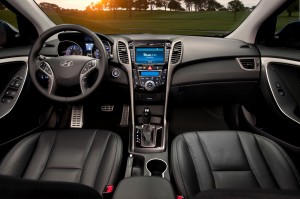 The interior space includes 23 cubic foot cargo space, but with the rear seat backs folded flat that area expands to 51 cubic feet.? The split rear seatbacks allow room for longer cargo like skis or snowboards and there?s still room for two rear seat passengers.? It?s like having a sporty wagon.

The 2013 Hyundai Elantra GT is the only Elantra model available with Hyundai?s new Blue Link communications system, and it?s a standard feature.? Blue Link incorporates seamless connectivity directly into the car with technology like voice-to-text messaging, point-of-interest web search download, turn-by-turn navigation, and monthly vehicle reporting which reports any problems your car might.? It also includes features like Automatic Crash Notification and Assistance, SOS Emergency Assist and Enhanced Roadside Assistance.? The service is included, but there is a charge after the introductory period.

Hyundai is the only automaker to have its own fully integrated steel plant, and engineers took advantage of that by using high tensile and ultra high tensile steel for 57 percent of the vehicle.? This is much stronger than traditional steel, plus it allowed engineers to keep the GT weight down to 2,745 pounds, making it lighter than the Ford Focus, Mazda3 and Volkswagen Golf.?? The light weight contributes to the excellent fuel economy rating of 39 mpg highway.?? The GT shares the same 1.8-liter four-cylinder engine, transmission ?and suspension as the sedan and the coupe.

The GT with six-speed manual transmission is priced at $19,170 including the destination charge for a very well equipped model with lots of little extras like heated front seats, Bluetooth?, Blue Link Telmatics along with a high level of convenience features.? In addition to the style package, mentioned earlier, there is an available Technology Package (which requires the style package) that adds navigation, rearview camera, automatic headlights and dual automatic temperature control for $2,350.? The six-speed automatic transmission adds $1,000. 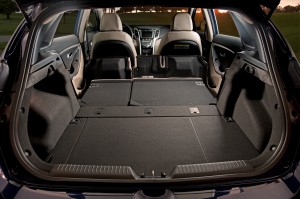 I was impressed with the sedan, and I love the coupe, but my favorite is the GT.? Like the others, the styling is distinctive, it?s an outstanding value, has a fun to drive nature plus an excellent fit and finish.? Overall, the Hyundai Elantra lineup offers new car buyers an outstanding variety of high value vehicles. 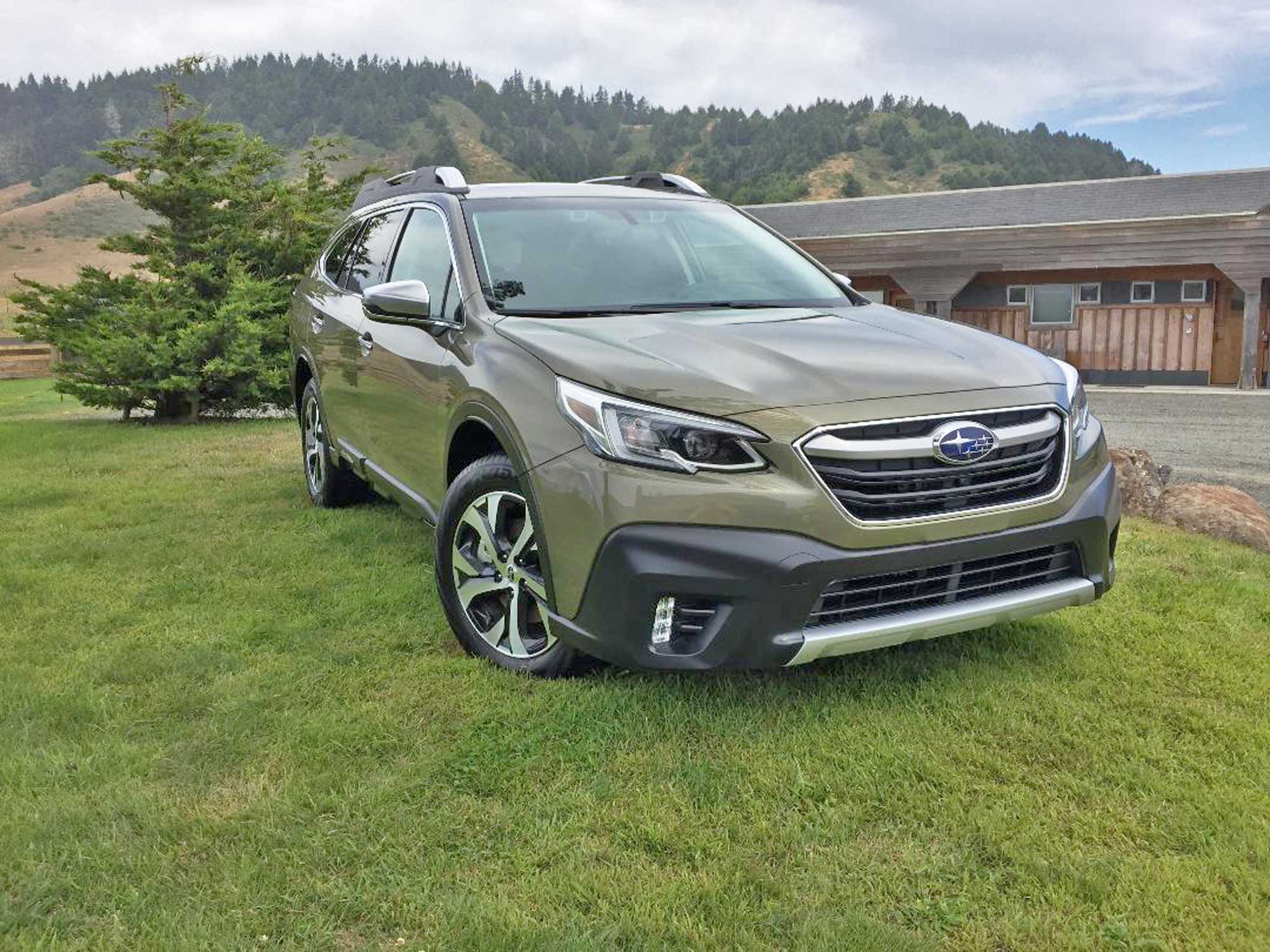