By Barbara & Bill Schaffer
2013 Honda Accord

The toughest new car market in the U.S. has to be the mid-level sedans where cars like the Toyota Camry, Honda Accord and Nissan Altima reside.? In the last two years, this category has taken on impressive new models like the Hyundai Sonata, Kia Optima and Volkswagen Passat. ?In addition, in the last few months, the list of reengineered and redesigned cars has the addition of new versions of some of the top models including the new super stylish Ford Fusion, Chevrolet Malibu, Dodge Avenger, Mazda6 and Subaru Legacy. 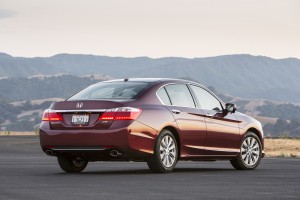 Now the mid-size fleet is filled with an amazing bunch of beautifully designed cars loaded with great features and new levels of performance and fuel economy.? A customer looking for a new midsize sedan is now faced with the most difficult buying decision ever.

Honda, which has been one of the perennial leaders in the category, has just rolled out their latest and greatest Accord, and it features some of the most innovative out of the box thinking we?ve seen.?

From a styling standpoint, the large Honda sedan doesn?t excite us.? Certainly, it has some interesting new design elements with a great deal more body sculpting and character lines than previous models, but it?s not really a head turner. 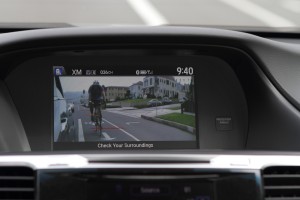 The 2013 Honda Accord?interior is all new with a bold instrument panel that includes two full color screens mounted at the top of the center stack. ?The eight-inch screen at the top of the stack is the ?intelligent? Multi-Information Display (i-MID).? It serves as the screen for the navigation system, the backup camera and several other electronic functions.? However, it?s most innovative use is for the new LaneWatch? feature.? When you turn on the right turn signal, the screen switches to a full color display of the right hand lane looking back from the sideview mirror.? It?s the coolest blind spot detection system we?ve ever seen, plus it?s great when you are sitting at an intersection about to turn right.? Check that screen quickly and you can avoid hitting a bicyclist or another car sneaking into that space. 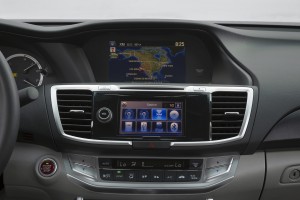 ?????????? The smaller screen an inch or two lower is the touchscreen for the audio system, which includes standard features like a Pandora? internet radio interface and a convenient SMS text messaging function that reads incoming texts aloud and allows the driver to respond with factory preset text messages.? For example, you can select from answers like ?Talk to you later, I?m driving,? ?I?m on my way,? ?I?m running late,? or ?OK?.

The 2013 Honda Accord?also includes a Bluetooth? HandsFreeLink? phone interface and some models have the Honda Satellite-Linked Navigation System? with Voice Recognition and FM Traffic.? In the past, we?ve considered the Honda navigation system to be the best in the business but, perhaps because it?s was new to us, this new version seemed a little less user-friendly than the original.? If we had time to master the voice commands, we?re sure it would be easier, but like many people, we don?t do very well with voice commands.

Honda engineers always seem to have a new innovative way of doing things, and that trend continues for 2013 with Earth Dreams? technology.?? Honda describes it as ?an expression for a set of technologies which takes into account both our need to protect the environment and our desire to provide a joy of driving.?? The Accord is the first American Honda to get the new technology. 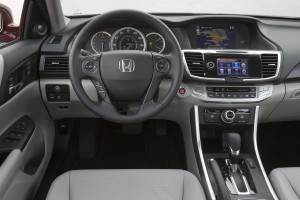 The 2013 Honda Accord continues to offer four-cylinder and V-6 engine choices, and there is also a ?hybrid in the pipeline for January 2013.? Both the gasoline engines have an improvement in fuel economy with the four-cylinder rated at 36 mpg for city driving and the V-6 at 34 mpg.? The 2.4-liter four-cylinder is the first Honda engine sold in North America to be equipped with direct injection.

On the safety front, the upper level Accords have a new Forward Collision Warning system to warn the driver of impending crash possibilities.? Other features we like are the Adaptive Cruise Control, the LaneWatch? blind spot monitor and the active noise and sound controls, which keep the cabin quieter. ?Honda has expanded technology in the Accord to push it into a leadership role in the category. 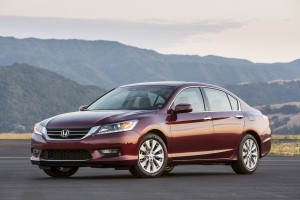 The 2013 Honda Accord sedan is available in six trim levels. ?Pricing ranges from $22,470 for the LX with manual transmission (the CVT is $800 more) to the Touring V-6 at $34,220.? We like the way Honda prices its vehicles — with the exception of technology packages and color, there are virtually no options.? They have added a selection of dealer installed accessories to dress up your Accord.

We enjoyed the Accord; it drives like a Honda, which means it?s responsive, positive and agile.? The ride is comfortable, the interior is one of the roomiest in the category and it rates high in fuel efficiency. The Accord is certainly still a category leader. 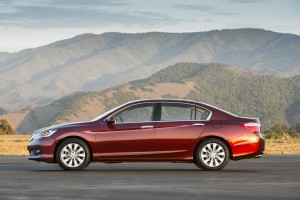 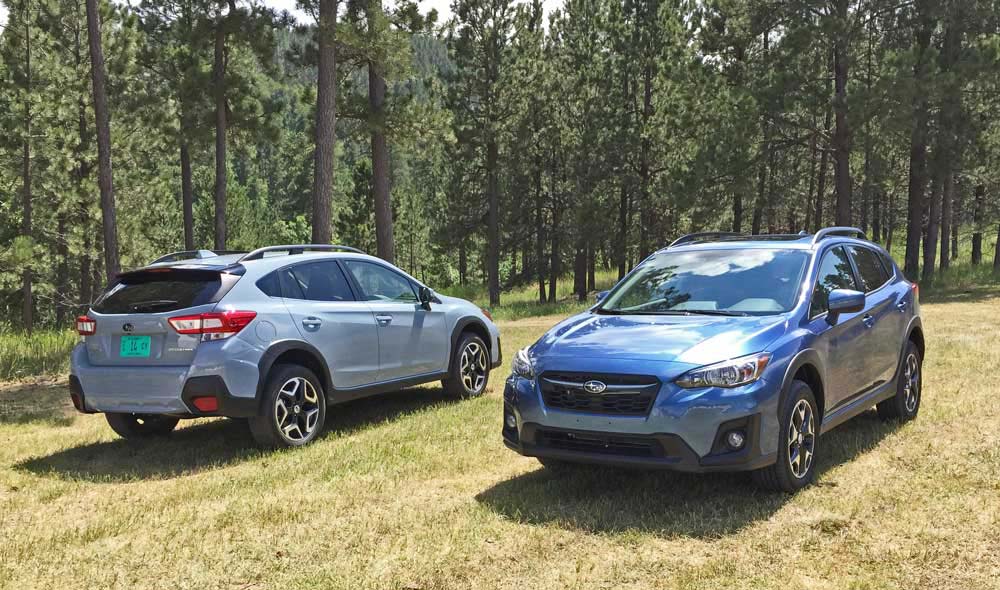