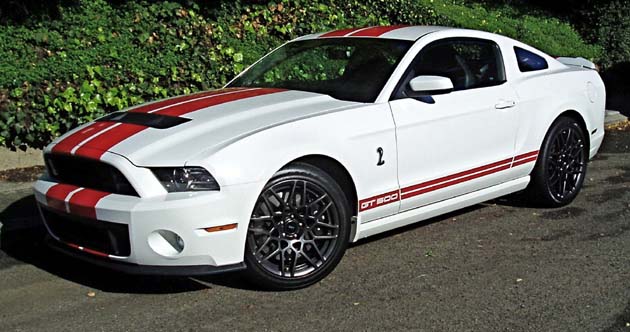 The 2013 Ford Shelby Mustang GT500 is the last Mustang that Carroll Shelby was involved with before his passing, and if there?s such a thing as a vehicle being overpowered, this is it. The Shelby GT500 is insanely fast and incredibly quick. Power is courtesy of an aluminum 5.8-liter DOHC, 32-valve, supercharged V8 engine with over-rev capability and electronic return-less sequential fuel injection mounted up front in a longitudinal orientation. It is the most powerful production V8 in the industry. The new supercharger pumps more air through the engine, resulting in a 112 horsepower increase over the previous model.

Try on 662 horsepower for size coupled with 631 pound feet of torque (which may well be understated). Motive energy reaches the rear wheels through a close-ratio, smooth shifting, Tremec TR6060 six-speed manual transmission: The Shelby travels from 0-60 mph in a mere 3.5 seconds – two tenths of a second faster than a Porsche 911 Carrera S, and it covers the quarter mile in 11.6 seconds. The GT500 has 22 more horsepower and 31 more pound feet of torque than the 2013 SRT Viper. The Shelby GT500?s top speed is 200 mph plus. 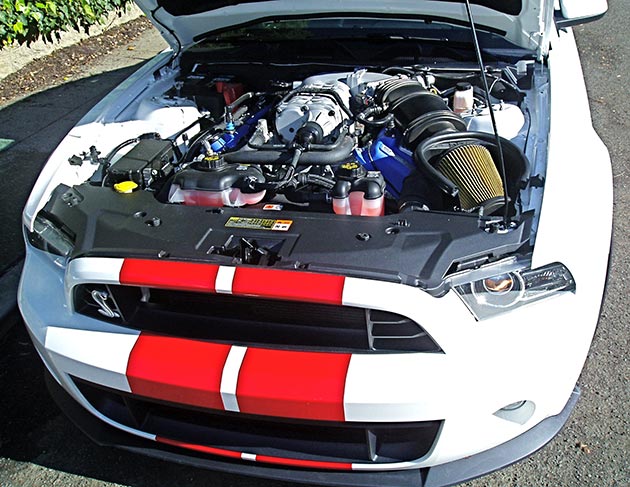 This latest iteration SVT 20th Anniversary Shelby Mustang GT500 is perhaps not the best Mustang ever, especially when compared to last year?s Boss 302 Laguna Seca edition, but it is definitely one raucous, ground-pounding machine, that?s sure to get your attention when behind the wheel. The 2013 Ford Shelby Mustang GT500 can slither with the best of snakes – you can tell when it?s happy, because it wags its tail like a dog. An optional SVT Performance Package adds a Torsen limited slip differential that aids in rear traction, along with additional cooling for the engine, transmission and differential as well as SVT-designed Bilstein electronic, adjustable damping, consisting of push-button selection of Normal or Sport modes. Launch Control is integrated with both the engine control and traction control systems for improved off-the-line starts. A Track package may be added for all-out racetrack performance. 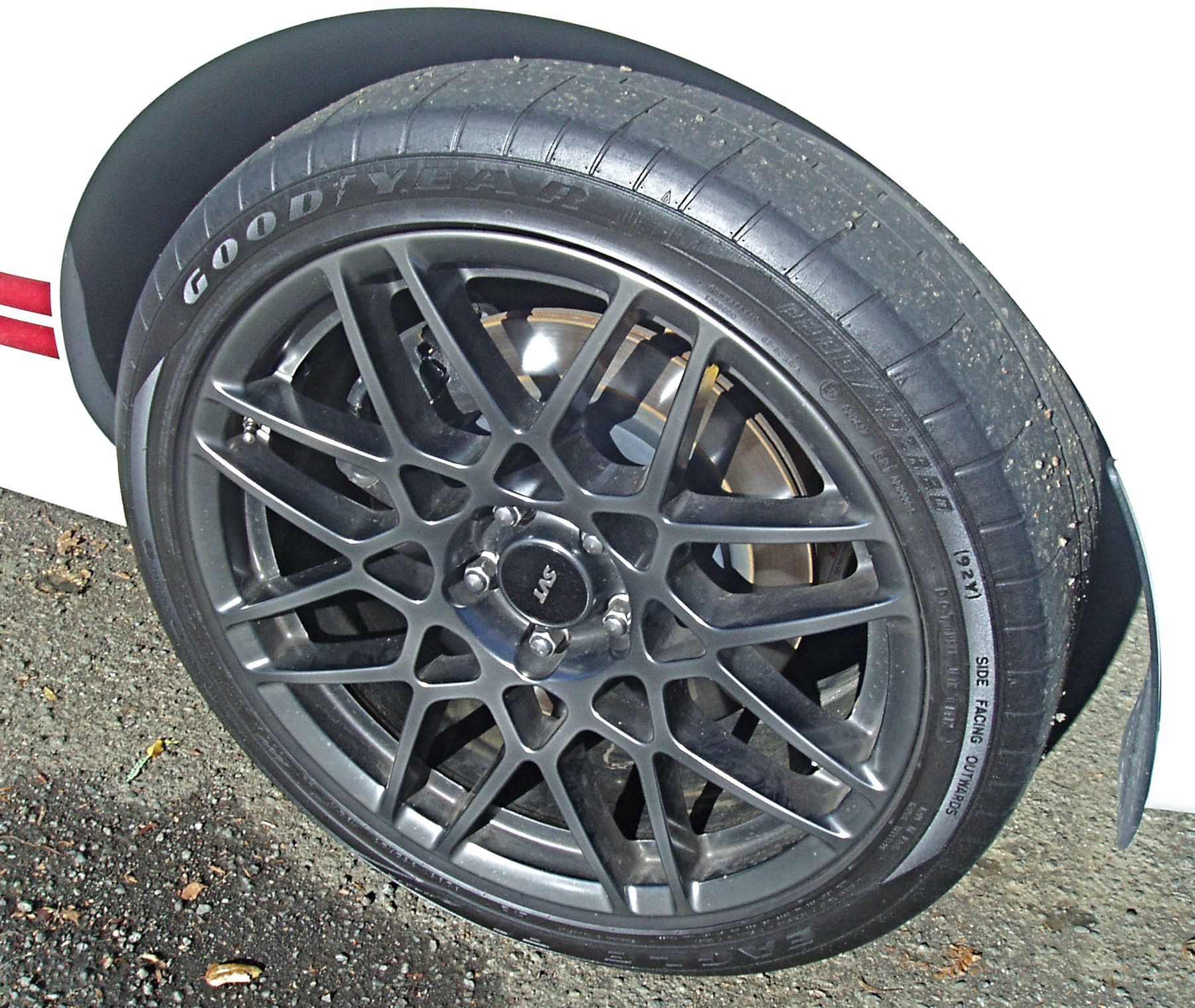 If there?s a problem with the latest Shelby GT, it?s with traction despite the improvements – the Goodyear Eagle F1 SuperCar staggered rubber (19-inchers up front and 20-inch in the rear). The rear tires want to break loose at the slightest provocation, particularly when cold. Traction improves when the tires warm up some. There can be a problem with the enhanced Brembo braking system even in light of the improvements during spirited, hard driving exercises, where once the brakes overheat can begin to fade. Let?s face it, all that power is a real chore to rein in.

The 2013 Ford Shelby Mustang GT500 is available either as a Coupe or as a Convertible capable of delivering 15-mpg city and 24-mpg highway for a combined rating of 18 mpg. Shelby GT500s are exempt form the federal gas-guzzler tax, due to its low 3,850-pound weight for the second year in a row. 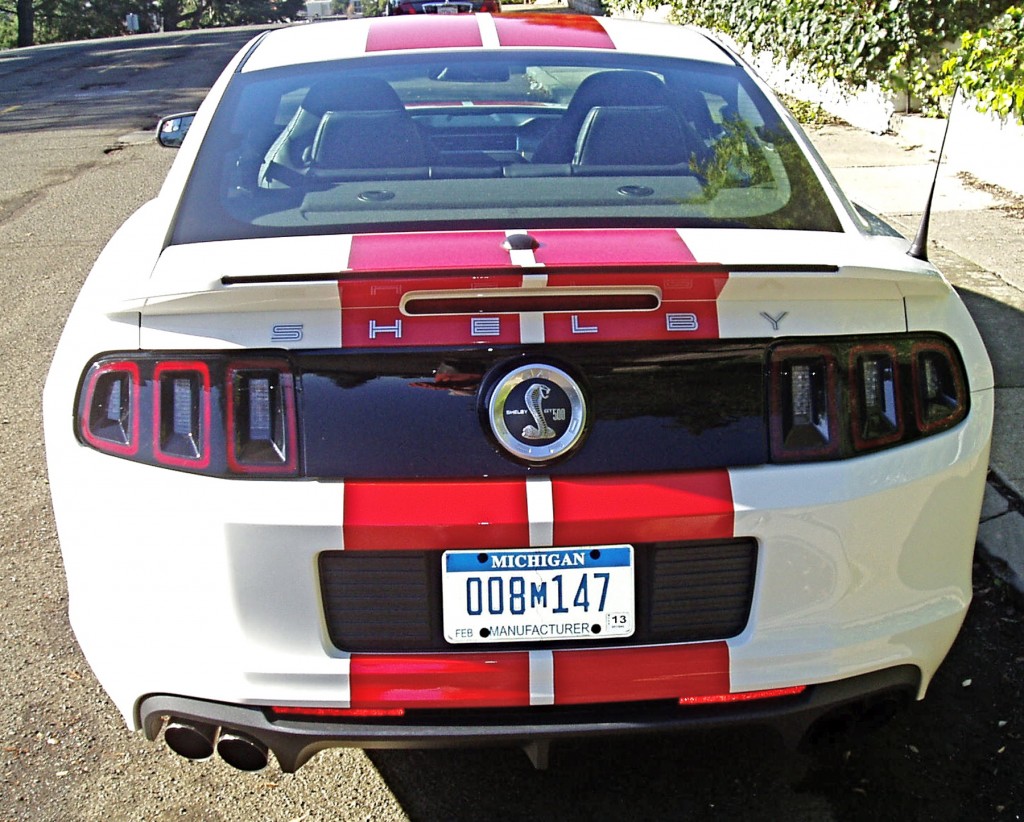 In terms of its appearance, the 2013 Ford Shelby Mustang GT500 is instantly recognizable as a high performance vehicle with its enhanced and pronounced downforce-generating front grilles, aggressive splitter, rear decklid spoiler, new quad exhaust system and new forged aluminum alloy wheels. Shelby, Cobra and GT500 badging is prominently displayed and announces to the world that this is a special peformance vehicle vehicle of the first order. The overall effect showcases the car?s bold, athletic performance capability.

Nearly every powertrain component was optimized to produce the car?s additional horsepower, including the new supercharger, new cross-drilled block and heads, updated camshaft profiles, a new carbon fiber driveshaft and clutch, transmission and axle. Brakes, gearing and suspension componentry have also been enhanced. 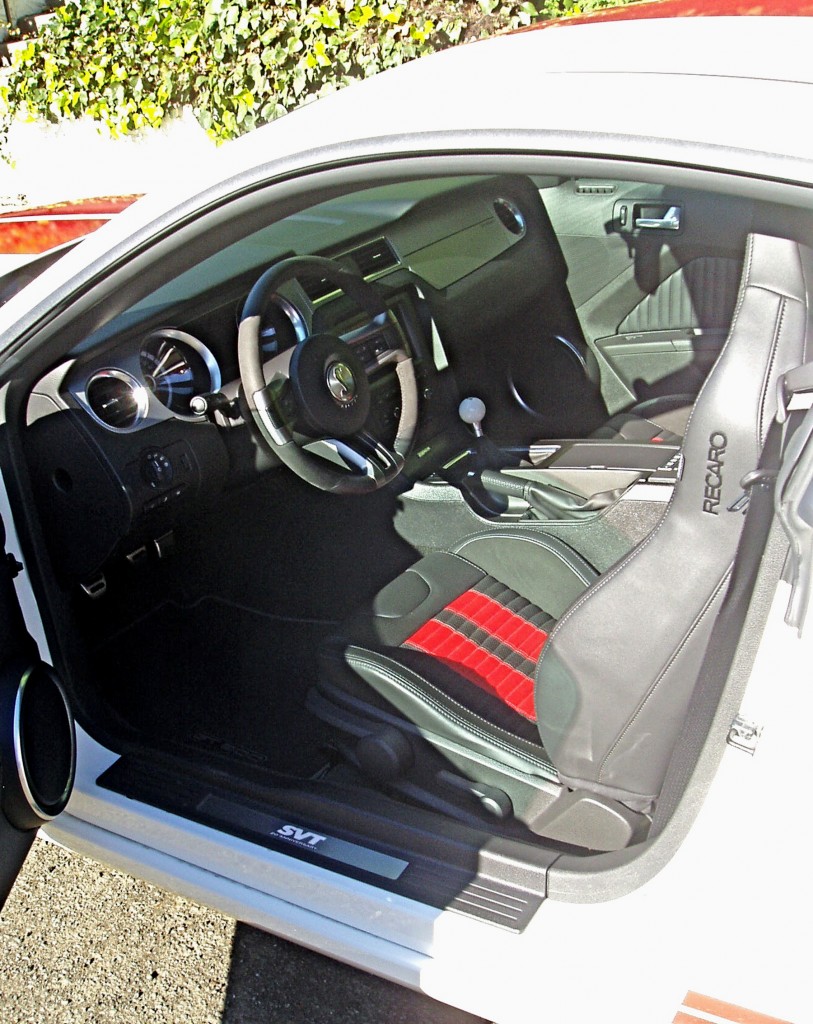 My test 2013 Ford Mustang Shelby GT500 Coupe was an ?SVT 20th Anniversary Edition? and came with a Performance White exterior, highlighted by twin LeMans Red top stripes and GT500 side rocker stripes. The interior was done in Black, with the Recaro racing seats inset with Red. Trim accents were done in machined metal, with metal, rubber-studded pedals. The base price was set at $54,200 while the addition of the SVT Performance Package , SVT Track Package, Electronics Package with Navigation Shelby manual Recaro front seats and Destination and Delivery charge elevated the final tally to $65,420.

SUMMARY: The Shelby Mustang GT500 is actually bargain priced considering its content and performance potential. But, even if one can handle the price, (which isn?t cheap) doesn?t mean that they can handle the car. Lose perspective and or respect for the car?s high horsepower and torque output and it can bite you in the behind in a heartbeat. 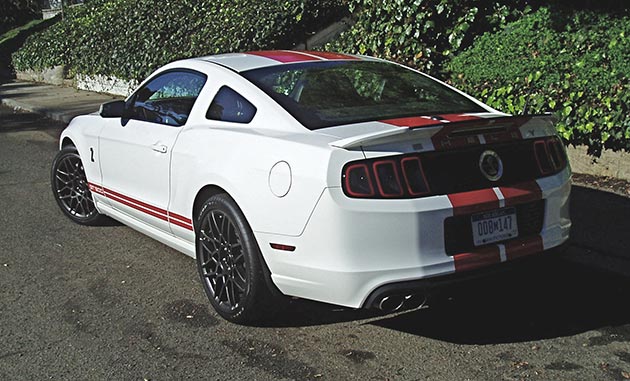 The supercharger obviously eliminates the power to the ground lag often experienced in turbocharged vehicles. Nail the throttle in first gear and the car wants to dance – punch the accelerator again while tooling along in second gear, and the rear end wants to come around. Repeat the action in third gear and the same result occurs. The Boy Scout motto comes into play when piloting the Shelby GT500 – ?Be Prepared?.

The ride quality is exceptionally firm – certainly not everyone?s ?cup of tea? for say, a cross-country trip, but who cares? The car stays flat and stable through the twisties provided close attention is paid to throttle modulation, otherwise trouble with a capital ?T? can rapidly take place. Handling response is instantly and necessarily responsive, which is a good thing.

Bottom-line, the Mustang GT500 is great fun to drive, but it is a handful and requires constant focus and instant reaction.? Lose focus, and you lose control. The braking issue would undoubtedly improve with ceramic brakes, which would minimize heat, but would also up the cost significantly. A large part of the car?s charm and appeal is the engine sound and thunderous exhaust note. This car is a top-notch smile generator.

The 2013 Ford Shelby Mustang GT500 will be built at AutoAlliance International Plant in Flat Rock, Michigan. 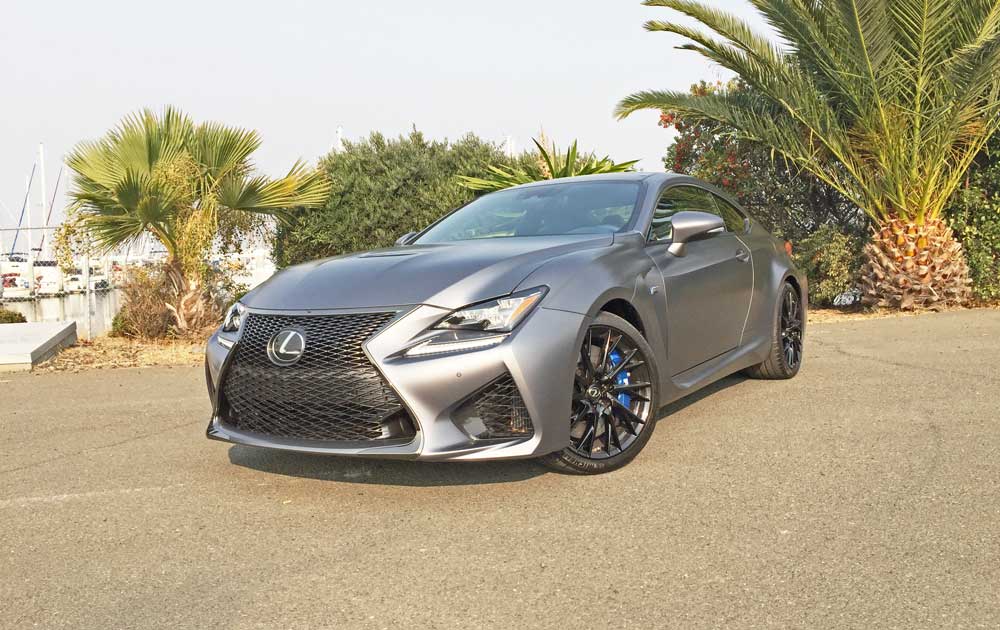