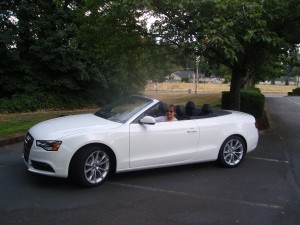 There are a few cars that we drive each year that we wish would simply stay in our garage.? Maybe the manufacture might forget they lent it to us for testing.? Sure, when pigs fly!? Obviously, these are the cars that we would love to own, and the Audi A5 Cabriolet was such a car.

The A5 Cabriolet debuted in 2009 replacing the A4 version and it was the first convertible to receive the updated Audi Singleframe? grille with angled upper corners.?? For 2013, it gets a new front bumper with air inlets, a revised grille and splitter along with new flat fog lamps. ?The signature daytime running lights were changed to a long LED rope that outlines the light pod with a gap on the lower section. 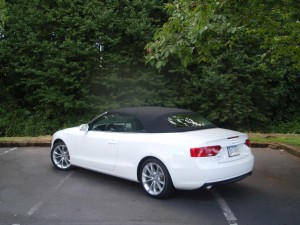 ??? The A5 has a fully automatic soft (black or brown) cloth top that can be operated at speeds up to 31 mph.? With the thermally insulated top up, the interior is snug and quiet.? Driving with the top down, the front seats had only a light wind buffeting.? With the wind blocker installed behind the front seats, over the rear seat, it becomes even quitter and wind-free.

A 211-hp, 2.0-liter TFSI? engine powers the A5.? In its basic front-wheel drive configuration, the A5 has a CVT (Continuously Variable Transmission).? The much more popular Quattro all-wheel drive models have Audi?s new eight-speed Tiptronic automatic transmission with shift paddles. ?The A5 accelerates from 0 to 60 in 6.7 seconds.? EPA fuel economy is rated at 20 mpg city and 30 on the highway.? We averaged 25.1 mpg during a week of driving.

Shoppers wanting more performance can step up to the S5 Cabriolet, which is powered by a supercharged, 3.0-liter V-6 engine rated at 333 horsepower.? It has a standard six-speed manual transmission with an available seven-speed Audi S tronic dual-clutch transmission. 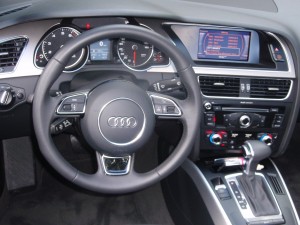 ??? ? The 2013 Audi A5 Cabriolet interior is classic Audi with a business-like dash that provides easy access to the well-organized controls.? The seats are comfortable, supportive and quite good looking.? The rear seat is large enough to hold two adults, with more room than you find in a typical sporty coupe.

Our test car didn?t have the optional MMI (Multi Media Interface) Navigation package, but we?ve had it on other Audis and think it is one of the best and most user-friendly control systems.? The MMI controls the audio, driver information, navigation and other features through a larger center stack button, which has other control panels on each corner.? This allows the operator use a of corner button to make a pre-selection before fine turning the selection using the larger control button.? It seems to make the system more user-friendly and much easier than the explanation.

The Audi Connect system, which is part of the MMI system, is the first vehicle system to use Google Earth? for the maps.? The system gives the driver a realistic, panoramic view of the terrain and city from high-resolution 3D satellite and aerial images.? In addition, it also gets real-time traffic information from SirusXM?.?? The Connect system includes an industry-first feature that allows the vehicle to provide Wi-Fi? service by creating a mobile hot spot for passengers to connect up to eight devices to the Internet via in the car Wi-Fi for emailing, texting, streaming music, gaming, etc.? It also provides Google? Voice Local Search to help find local points of interest. 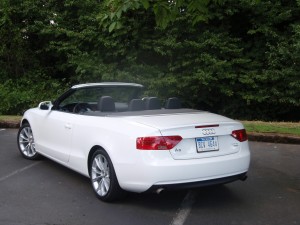 The 2013 Audi A5 Cabriolet includes several driver assistance systems including an adaptive cruise control which helps keep the car a constant distance from the vehicle ahead, even as speeds change.? At speeds below 19 mph, the system will also brake for the driver.? There is also an available parking system with a rearview camera and audio warning system that also makes parking easier. ?We also appreciate the side sensors that warn the driver when a vehicle enters the blind spot on either side of the car. We believe this is a must-have feature.

The 2013 Audi A5 Cabriolet pricing starts at $44,245, including the destination charge, for front-wheel drive with CVT transmission.? The Cabriolet comes in three trim levels, Premium, Premium Plus and Prestige.? The quattro Premium model with the eight-speed automatic starts at $46,345 and the Prestige which adds features like adaptive lights, MMI navigation, side assist and Bang & Olufsen audio starts at $53,695.? The S5 with its supercharged V-6 engine starts at $60,195. 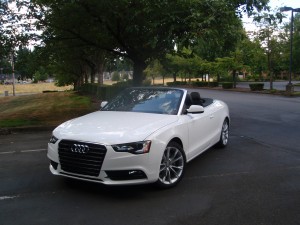 It?s fun to drive the A5 Cabriolet.? The engine is very responsive delivering more performance than you would think possible from a 2.0-liter engine.? The handling is flat, and it?s very sure-footed, being one of the few convertibles you can get with all-wheel drive ? this makes it that much more desirable where we live in the Northwest. ?The smaller engine also rewards the driver with good fuel economy.? Right now, the A5 Cabriolet is at the top of our list of cars we?d like in our own garage. 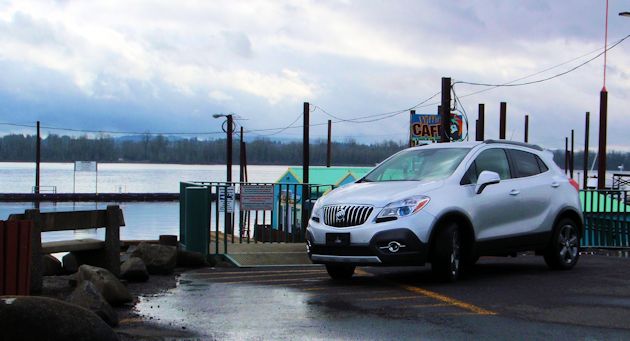