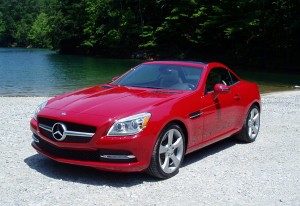 Blackberry Farm-Walland, TN ? Mercedes-Benz just introduced one model of their third generation SLK Roadster to U.S. journalists in the Great Smoky Mountains of Tennessee ? the SLK350 naturally aspirated, direct injection V6. A four-cylinder turbocharged model will follow early next year, and perhaps after that, an AMG version.

This latest iteration two-seat SLK is all new from stem to stern with a host of unique and innovative features, not the least of which is their new Magic Sky Control, one of three retractable roof systems. The base system is a solid roof, with a clear poly-carbonate panel with an 80 percent tint, and the new Magic Sky Control, Electrochromic roof, which features a first ever variable tint roof that aligns electronically-charged particles to intensify the Blue tint of its roof system at the touch of a button. All roofs are a Vario folding type that stow neatly beneath the rear deck lid. 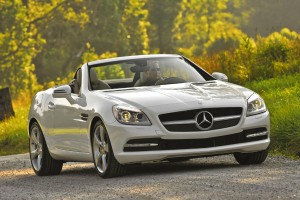 While some may envision the SLK to be what some refer to as a ?chick? car, this latest version is much closer to being a true sports car. Initially, the SLK will only be available with a 3.5-liter DOHC, 24-valve naturally aspirated, Direct Injection V6 that produces 302 horsepower at 6,500 rpm, along with 273 pound feet of torque in? a range from 3,500 to 5,250 rpm. No manual gearbox is available for the V6 ? only a new, more efficient Seven-speed automatic with manual shift capability via steering wheel mounted paddle shifters and Touch Shift manual shift control and Selectable Manual mode. The engine is positioned in a North/South orientation up front, and drives the rear wheels. 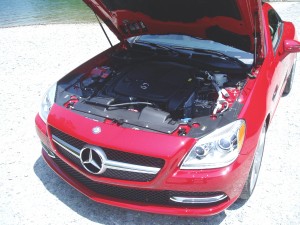 When the SLK250 arrives, it will weigh 89 pounds less than its V6 stablemate, but will share all the same basic dimensions. A six-speed manual transmission will be standard for the four-cylinder, with the seven-speed automatic gearbox optionally available. Both 2012 SLKs will measure 1.5-inches longer, 1.5-inches wider, and will ride ?-inch lower. The turbocharged four-cylinder engine (also Direct injection) will put out 225 horsepower and the same 245 pound feet of torque as the V6. Pricing has yet to be set for the SLK250.

In terms of its sex appeal, the diminutive SLK retractable hardtop roadster, is still instantly recognizable as both a Mercedes-Benz and as an SLK. It is sleek, aerodynamic and beautifully proportioned with the top in either the up or down position

The original SLK first entered the U.S. market in January of 1997, powered by a 185 horsepower supercharged four-cylinder engine, mated to a five-speed automatic. It became known simply as the Kompressor (German for Supercharger). It may be rightfully thought of as the ?Spiritual Successor? to the 190 SL Roadster, or even the first automobile -?Carl Benz’s original roadster.

The new, folding top now opens and closes more quickly and allows for increased trunk space. The transformation from a quiet, weather-tight coupe to its topless motoring configuration takes a mere 20 seconds, and is accomplished by six hydraulic motors ? two controlling the roof, two locking the roof to the windshield frame and the final two powering the tubular frame. 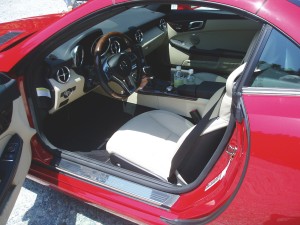 SUMMARY: The 2012 Mercedes-Benz SLK350 is sure to fulfill many diversified aspirations ? it is capable of performing with sports car tendencies or as a boulevard cruiser. It will also appeal to both genders, but I suspect that that it?s feminine allure will reign supreme.

Acceleration from the naturally aspirated V6 and handling characteristics are both ?stellar? attributes (in keeping with the MBZ Star). Space accommodations are limited for occupants 6?4? or more. The seats are both comfortable and supportive, but the seat?s proximity sensor precludes achieving the absolute optimum driving position for ectomorhic types ? recline the seat back to the point of touching the rear bulkhead and the seat cushion automatically moves forward, placing one?s knees into the dash. Other nits to pick: there is no place for the driver to put his or her left foot when not operating the brake; and the cruise control stalk and directional signal stalk are so close together, that one all too often activates the wrong one unintentionally.

Driving the fabled ?Tail of the Dragon? road that boasts in excess of 200 turns in a challenging and technical 11-mile stretch delivered an insurmountable level of sheer driving pleasure, while putting the SLK through its paces. My driving partner had piloted other vehicles over the legendary ?Tail?, so even though it was his turn to drive, relinquished his seat time to me. Bless him! It is now one of my 3 favorite non-race course drive routes in the country.

This latest iteration of the MBZ SLK350 delivers FUN and spirited driving, along with more FUN. In completely loaded form, it also provides nearly every imaginable comfort and convenience feature known to man (or woman). If you want to spend less, waiting for the SLK250 might be the way for you to go, and if money is no object, and you want more punch and pizzaz, then you may want to wait for the inevitable AMG version that?s likely to come along in the not too distant future.