For the 14th annual F-Series truck and Harley-Davidson motorcycle partnering, Ford has created one of the most dramatic models ever.? The Ford Harley-Davidson? F-150 flaunts new snakeskin leather interior accents and a stylized bodyside graphic for 2012.

?This is a great pairing of two icons of the open road: Ford and Harley-Davidson. Both brands appeal to truck owners and motorcycle enthusiasts alike,? said Marc Lapine, Ford F-150 marketing manager. ?For 2012 we worked with Harley-Davidson to continue to push the styling envelope while still delivering the durability and power that F-150 is known for and that our collective customers expect. It perfectly captures both brands.? 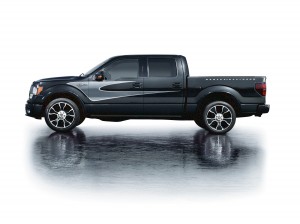 Graphics on the bodyside have a unique snakeskin texture and ?Harley-Davidson? dimensional lettering is featured on the box side. 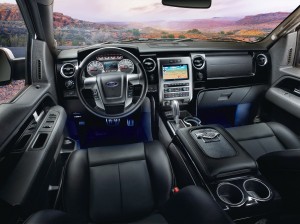 The seats and the console lid badges are produced by the same company that makes badges for Harley-Davidson motorcycles.? Other HD badging includes limited-edition serialization plates, which include laser-engraved VIN and build numbers.

Introduced in August at the annual Sturgis, S.D. motorcycle rally, the 2012 edition is loaded with the latest technologies including a standard 4.2-inch LCD (liquid crystal display) productivity screen positioned between the tachometer and speedometer.? This screen displays a range of menu options, giving the customer important information on everything from fuel economy to towing performance. ?The menu is navigated through a five-way button on the steering wheel. 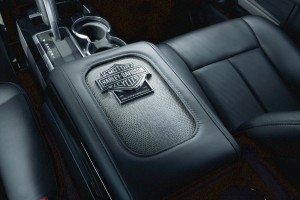 Additionally, the F-150 comes equipped with a standard voice-activated Navigation System that integrates several functions, including voice-recognition destination entry, climate control and SiriusXM Satellite Radio into one easy-to-use system, displaying them on an 8-inch touch screen.

Other standard features on the 2012 Ford Harley-Davidson F-150 include: 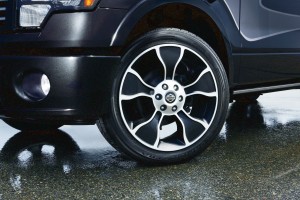 The Harley-Davidson edition Ford is powered by a 411-hp, 6.2-liter V-8 gasoline engine with a six-speed automatic transmission.? The SelectShift Automatic? transmission has a toggle switch shifter located on the console shift giving the driver total control over gear selection and performance feel when desired. ?The truck is available both in rear- and four-wheel drive.

The 2012 Ford F-150?Harley Davidson?price has not yet been announced, but is expected to be at the same level as the 2011 model which was $50,495 including the destination charge.