Not your Grandpa’s Buick 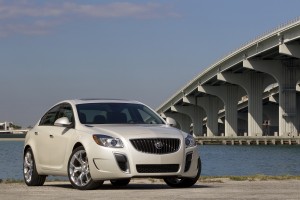 Miami, FL. – ?Take notice ? Buick is no longer a vehicle for aged consumers who can?t afford a Cadillac. To prove this point, a team of General Motors and Buick executives are hosting what they refer to as ?Regal Remix? consumer events in key metropolitan cities across the U.S. The goal and purpose of these programs is to show Buick?s modern portfolio to people in an all-new way. At the Remixes, Buick models are displayed in a relaxed setting with live entertainment and refreshments.

Attendees at the Remix in Miami experienced a special treat ? the unveiling and reveal of Buick?s next model, the Regal GS. The Buick Regal GS for 2012 is the hottest thing to be offered in Buick?s lineup yet.

The 2012 Buick Regal GS production model promises to take Sports sedan performance to a new level for The Buick marque. The GS is a high-performance midsize sport sedan with a 0-60 mph performance of under seven seconds, courtesy of an exclusive, GS-only high-output version of GM?s Ecotec 2.0L turbocharged engine with Direct Injection that delivers 255 hp along with 295 lb.-ft. of torque. The engine has the responsiveness and acceleration of a 3.5L V6, while delivering the fuel economy of a 2.0L four-cylinder motor. Initially, the engine will be mated to a six-speed manual transmission only, with a six-speed automatic gearbox with Driver Shift Control becoming available at a later date.?

Featured in the GS is Buick?s Interactive Drive Control System comes as standard fare on the GS. The system allows drivers to customize the driving experience by changing suspension settings as well as steering sensitivity between three modes: standard, sport and GS.?

The interior features a racing-inspired, leather-wrapped flat-bottom sport steering wheel with audio controls and metal sport pedals, along with leather-appointed 12-way power-adjustable sport driver and front passenger heated seats, which include four-way power lumbar. The GS-specific black interior is accented with satin-finish elements on the instrument panel, steering wheel and console, while the instrument panel glows white when the driver engages the GS mode of the Interactive Drive Control. 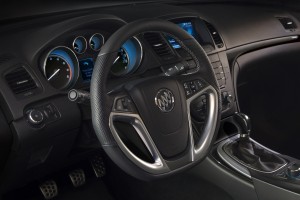 The 2012 Buick Regal GS is a four-door, five-passenger midsize sedan with the engine positioned up front in a transverse orientation, driving the front wheels.?

The GS is slated to go on sale in the second half of 2011. Official pricing has yet to be announced, but despite not knowing the cost, the crowd in attendance, which consisted mostly of 20-somethings were exuberant and excited about the new GS to come.?