BMW?s venerable M3 first appeared as a homologation special vehicle in 1986, which allowed BMW?s entry into contention for the German Touring Car Championship. The M3?s popularity and ever increasing sales for each iteration has motivated the German automaker to continue developing this unique combination of driving dynamics, comfort and luxury in a compact machine, serving up a new version each time the underlying 3 Series was reborn. The U.S. first saw the M3 sports sedan concept in 1988.

That first M3 produced 192 hp from a 2.3-liter four-cylinder engine during its 1988-1991 model year run. The next generation arrived in 1995 with a 3.0-liter (and later, 3.2-liter) 240-hp inline-six powerplant.? In 1997 the first M3 Sedan joined the BMW family and the first M3 Convertible followed shortly thereafter. Available as either a coupe or convertible from 2001-2006, the M3 was again offered with six-cylinder power, this time making 333 hp from its 3.2 liters. From the 2002 model year, this vehicle featured BMW?s first use of SMG (Sequential Manual Gearbox) for the US market ? which I might add was not a big hit.

The M3 Sedan for 2011 featured a V8 engine, a first for a series production BMW M3 (along with its coupe and convertible counterparts). It featured driver-adjustable settings for crucial dynamic controls including steering, damping and stability (and an available steering-wheel-mounted ?M Drive? button to store the preferences), along with a sporting interior that could be optimized to suit the desires of individual drivers, including a comprehensive entertainment/navigation system operated through BMW?s iDrive controller, which was more user friendly than when it was first introduced. 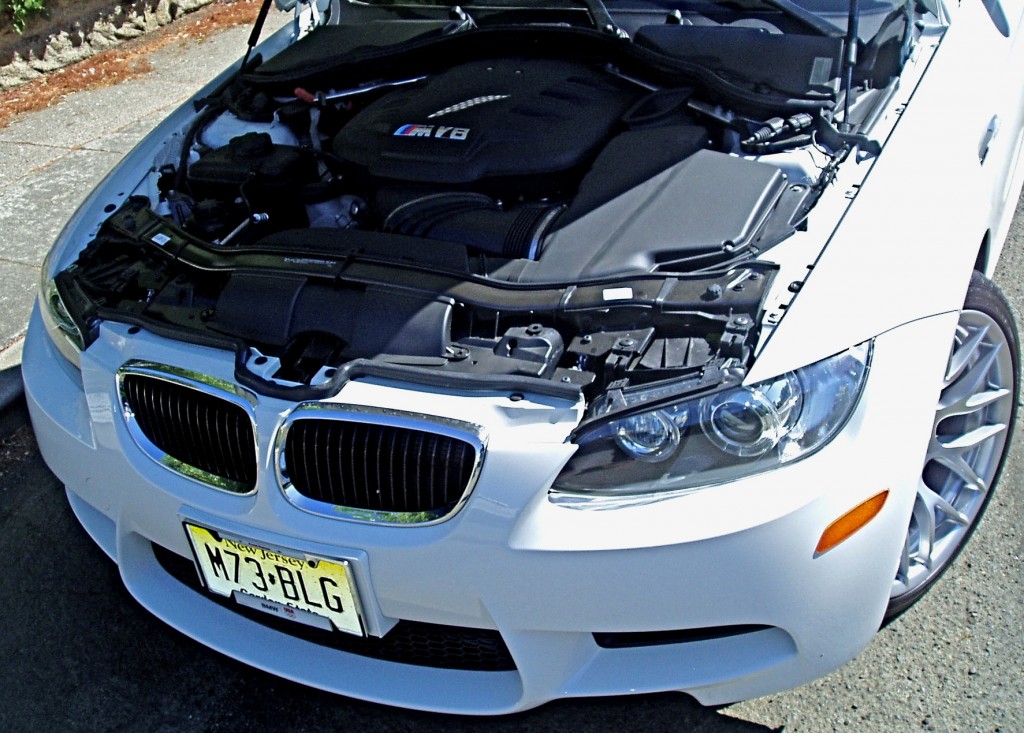 Enter the new fourth generation 2012 BMW M3 Coupe and Convertible, with power comes delivered by a 4.0-liter, DOHC, 32-valve V8 engine with M Double-VANOS steplessly variable valve timing and BMW MS S60 electronic port fuel injection. It produces 414 horsepower at 8,300 rpm while also developing 295 pound feet of torque at 3,900 rpm. The engine is mounted forward in a longitudinal orientation. There are two transmission choices: a six-speed manual gearbox, or a unique 7-speed double clutch automatic transmission with Drivelogic (M DCT Drivelogic that changes gears with no power interruption). This means that the driver can keep the accelerator pedal nailed to the floor during the shifting process.

Drivelogic control offers several different shift programs to suit driver needs, consisting of programs that allow for automatic operation of the transmission as?well as manual programs.? Manual shifting may be done via a sports shift lever or via steering wheel mounted paddles. Upshifts are accomplished by pulling the right-hand paddle, while the left paddle is used to shift down. Power is delivered to the rear wheels.

The M3?s suspension componentry consists of a double-pivot strut-type with aluminum components up front for reduced unsprung weight, while the rear setup is a 5-link system. 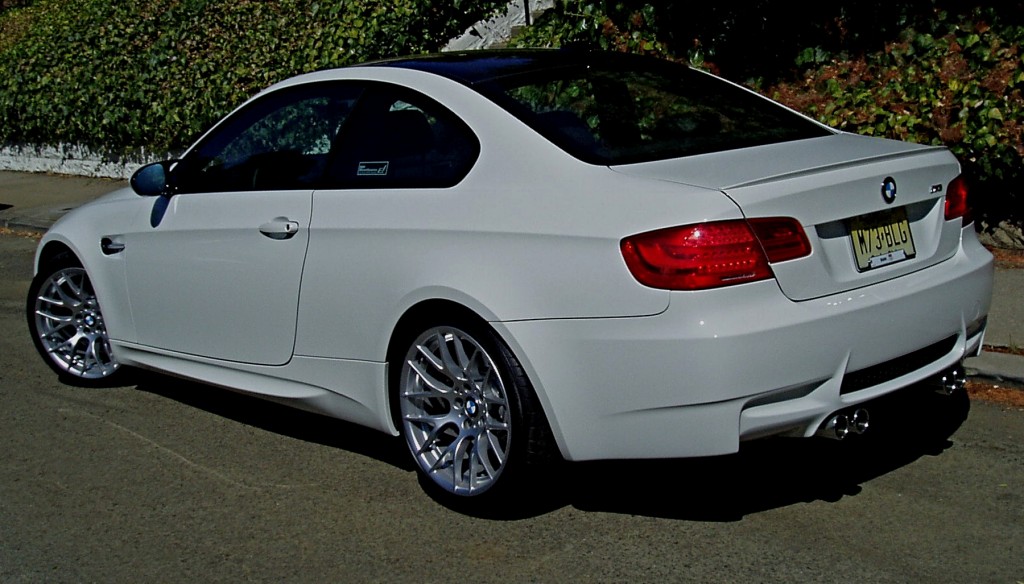 Visually, the 2011 M3 coupe clearly sends a serious performance message. The familiar twin-kidney grille is still present but there are also three large air intakes to facilitate the engine?s breathing. The aluminum hood features a power dome not present on the base 3-Series models, and the side panels sport the tri-color (blue/purple/red M3) logo set in what the designers refer to as gills. The coupe appears with a standard carbon fiber roof and the convertible is a retractable hardtop.The leather steering wheel stitching is in the traditional red and blue zig-zag theme. The M3?s muscular looks continue in the rear ? with the design mirroring the front end look.? A discreet lip spoiler appears on the deck lid, optimizing the car?s streamlining while also reducing lift. The contours of the split diffuser beneath the rear bumper reflects the shape of the air intakes at the front of the car as the air guide and the dual tailpipes move towards the car?s centerline. A further feature is the circular shape of the twin dual tailpipes in typical BMW M style.

My test of the 2012 BMW M3 Coupe was finished outside in Artic White, with a carbon fiber roof panel, while the interior was executed in Anthracite Black leather and cloth, with Blue Gray brushed aluminum trim accents. The base sticker was set at $60,100. but the final tally reached $69,045. after adding extras, which included: the Competition Package;? M Double clutch automatic transmission; comfort access keyless entry and Navigation system; Blue Gray brushed aluminum trim; satellite radio with 1-year subscription; Destination charge; and Gas Guzzler Tax. 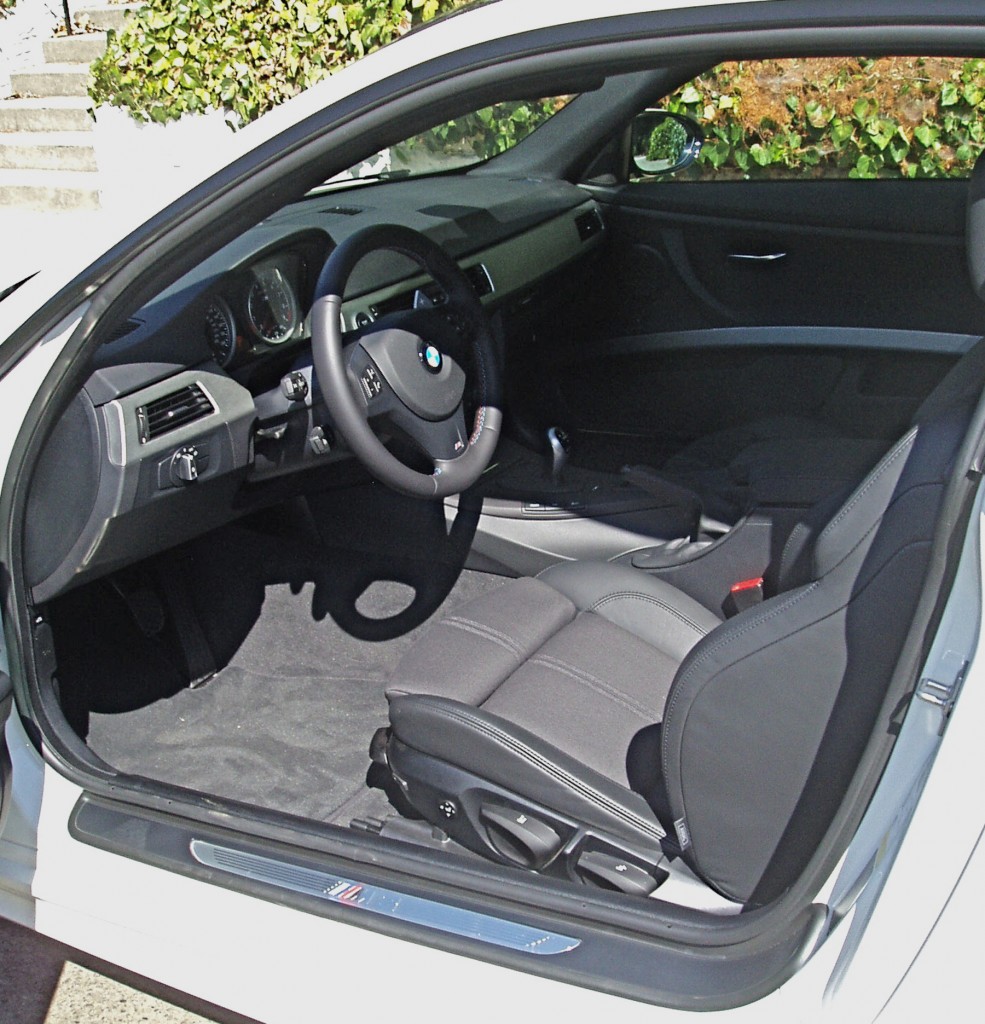 ?SUMMARY:? The 2011 M3 Coupe is an incredible driver?s machine that is actually a cut above what the earlier 5-Series used to be. In fact, that seems to

be the norm across the entire BMW lineup lately ? the example within a particular series surpassing, or at least equaling the capability of the previous iteration of the next series up the ladder.

The M designation unquestionably stands for MUSCLE in a big way. The healthy 414 horsepower V8 is always ready to romp. There is a separate throttle butterfly for each cylinder, providing a constant and immediate reaction to the accelerator pedal input. It weighs in at less than the inline six-cylinder that preceded it, and carries on a legendary racing tradition. Teaming the athletic mill with the Competition Package and the optional $2,500 investment is well worth it. The M Double Clutch gearbox with Drivelogic and its progression of 7 gears, serves up a coupe that can make a skeptic into a believer. It is a performance machine that can be setup to suit the driving mood of the driver by pressing the wheel-mounted ?M? button after setting up the parameters that are accessible via the now more user-friendly iDrive controller rotary dial.

To enter the ?M? world, one must first buckle up. Once buckled in, the first bump of the shift lever to the right enters the manual shift mode ? a second bump will set up the automatic shift mode. The manual mode may also be accessed via the wheel mounted paddle shifters.

Acceleration is blistering even in the normal automatic mode, but press the ?M? (this time it stands for Magic), and wonderful things take place, at an even more rapid pace. Driving characteristics are fully customizable.

The ride quality is firm, as one might well expect in a car of this caliber, but not at all intrusive. The damping level may be adjusted electronically, through Sport, Normal and Comfort modes. Stability is spot on, especially with the Competition Package?s larger wheels and lower profile tires, as well as unique suspension tuning. 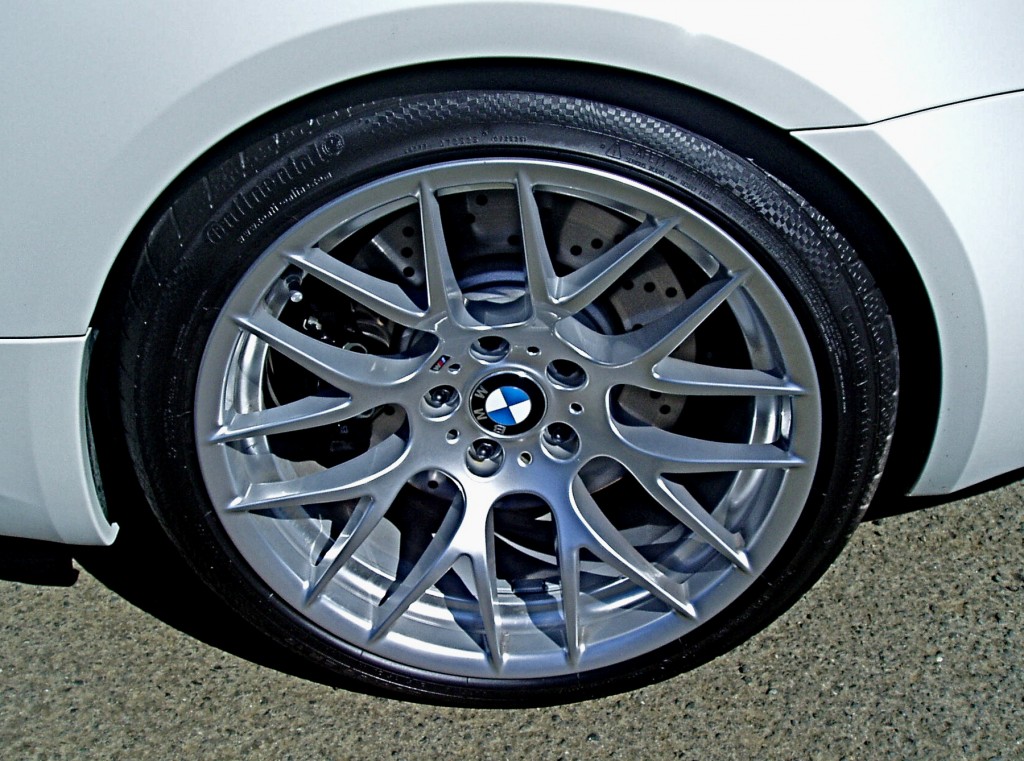 Steering is positive and precise, with the Servotronic power assistance offering two different control maps, that are activated through Normal? and Sport modes via a console mounted button. The input effort required in Sport mode is higher, while the Normal mode requires a reduced effort.

Bringing the M3 two-door to a halt presents no problem either with the compound brake system featuring internally vented, oversized, cross-drilled cast?iron discs. Added to the car?s tailorable control features are systems such as ABS, DSC, ASC, CBC and Start-Off Assistant.

Mastering all of the M3?s system requires focus, and referencing the owner?s manual is recommended to maximize the potential enjoyment and operational proficiency. 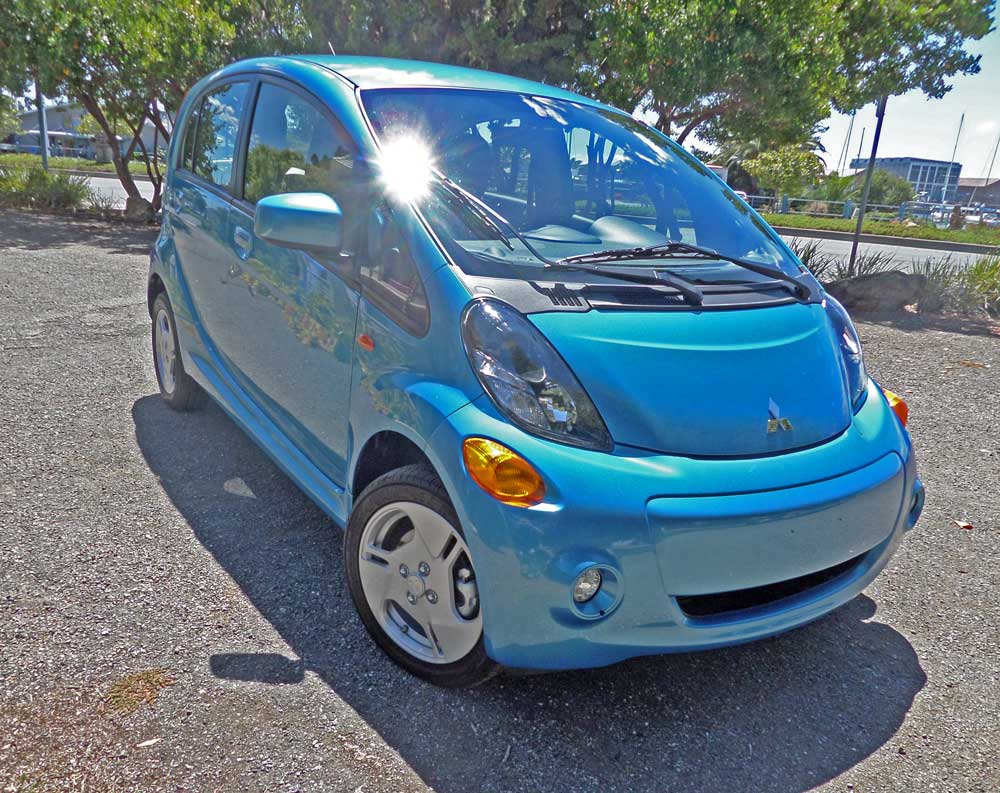 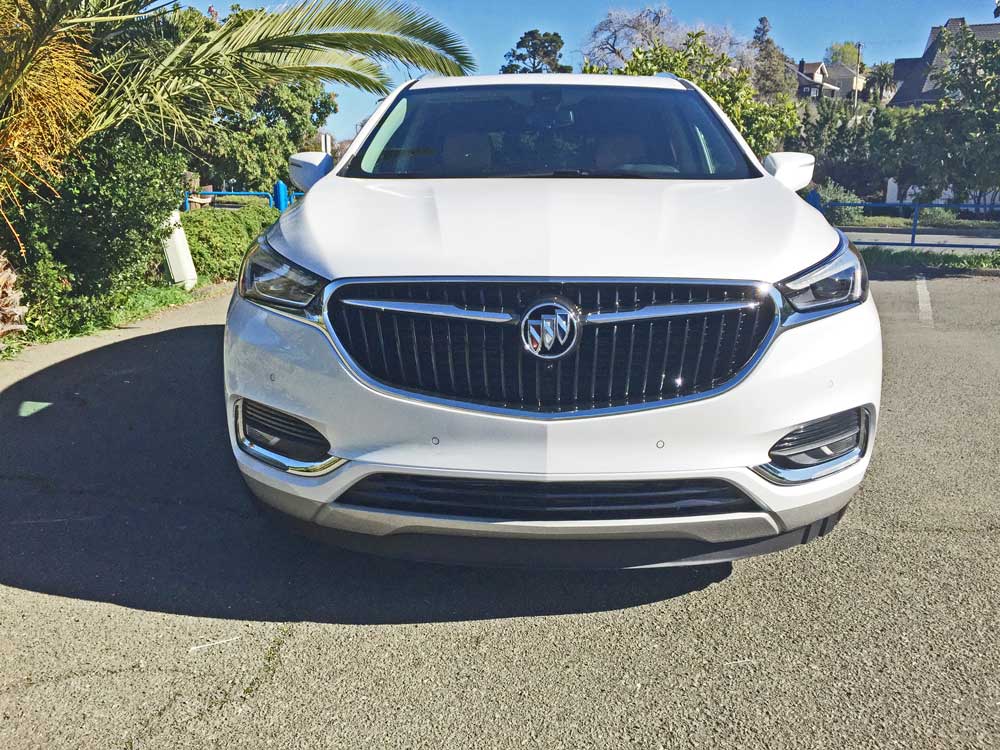