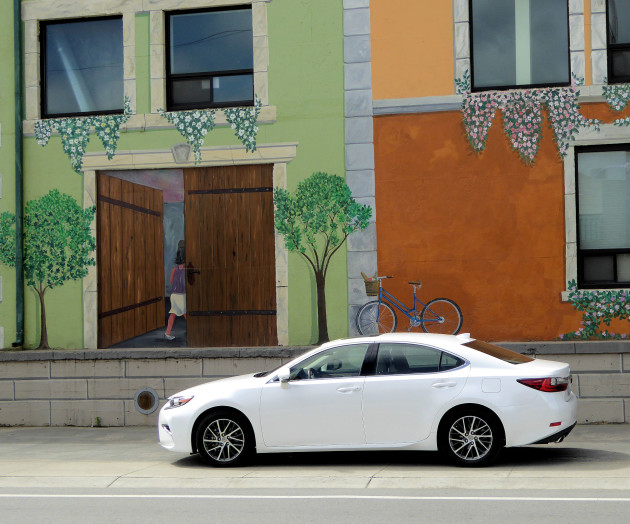 Central California ? It was again time for another pilgrimage to California, this time for the Easter parade. Okay, we didn?t actually go to any Easter parade, but it was a chance for us to visit with the grandchildren, relatives and friends, to celebrate Barbara?s best friend?s birthday in wine country* and for Bill to attend the annual Western Auto Journalist?s Media Days**.

As we were going through the list of cars we have reviewed in the last year, we noticed the all-new 2016 Lexus ES 350 was missing. An email to the press fleet manager confirmed there was one available in the northern California press fleet and it was ours for Easter week. 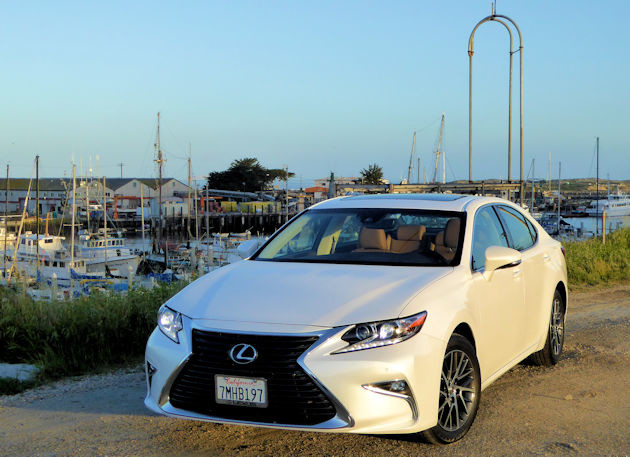 As we arrived in San Jose on our Alaska Airlines flight there was an Eminent White 2016 Lexus ES350 waiting for us at the airport to test during our week-long stay in the area.

We had sometimes thought earlier generations of the ES had the look and feeling of being a Toyota Camry after a makeover. That?s not a bad thing because, the Camry is impressive, it?s just that we expected the Lexus to be extra special. 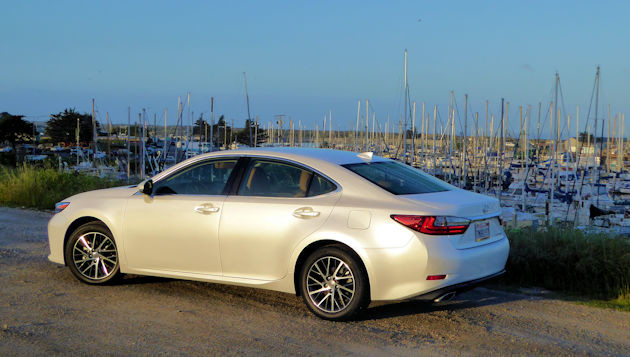 The 2016 Lexus ES 350, is extra special and certainly no warmed over Camry. The seventh generation sedan has distinctive Lexus styling, luxury, comfort and performance. Most manufacturers share platforms among several models, and ES does share its platform with the Toyota Camry/Avalon, however, the final execution of the ES is pure Lexus. 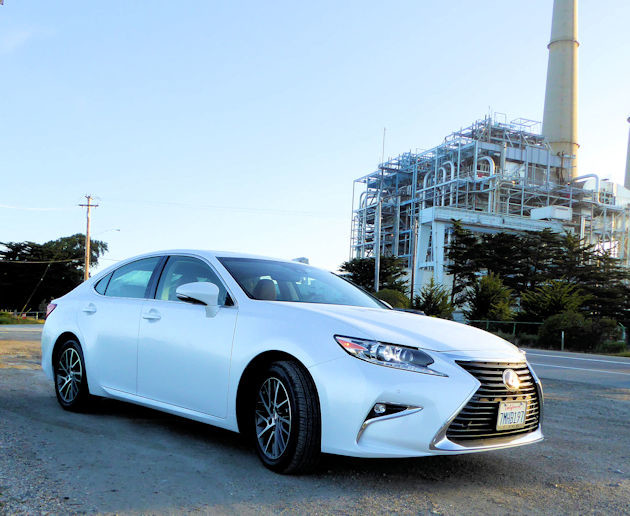 With its bold signature spindle grille and simple elegant lines, the ES 350 looks the part of a luxury sedan. The front end look is enhanced with slim light pods which sport a distinctive LED signature daytime running lights by day and available bi-LED headlights by night. Bringing up the rear are L-shaped LED taillights and new rectangular chrome-tipped exhaust ports which resemble those on the flagship Lexus LS. The finish on the all the colors is an innovative self-healing clear coat so minor scratches disappear. 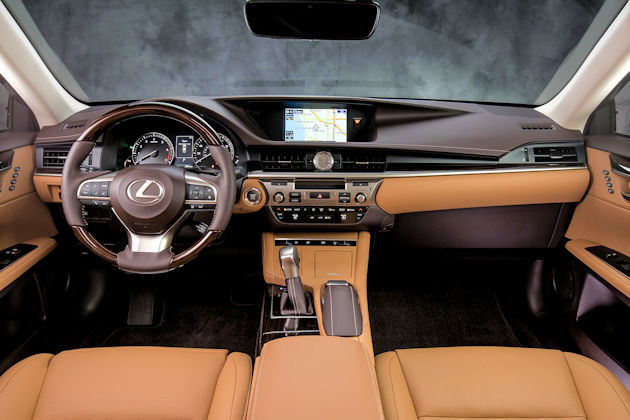 As we lifted our bags into the trunk (15.2 cubic feet) and slipped into the posh interior we could see there this was nothing ordinary about this ES: it was pure opulence. With soft leather seating, stitched soft surface trims and wooden trim, the ES 350 looks the part of a luxury car. The controls are well-marked, conveniently placed and have a quality feel?nothing plastic feeling here. The cabin is roomy and comfortable for five adults, and the rear seat even has class-leading legroom. 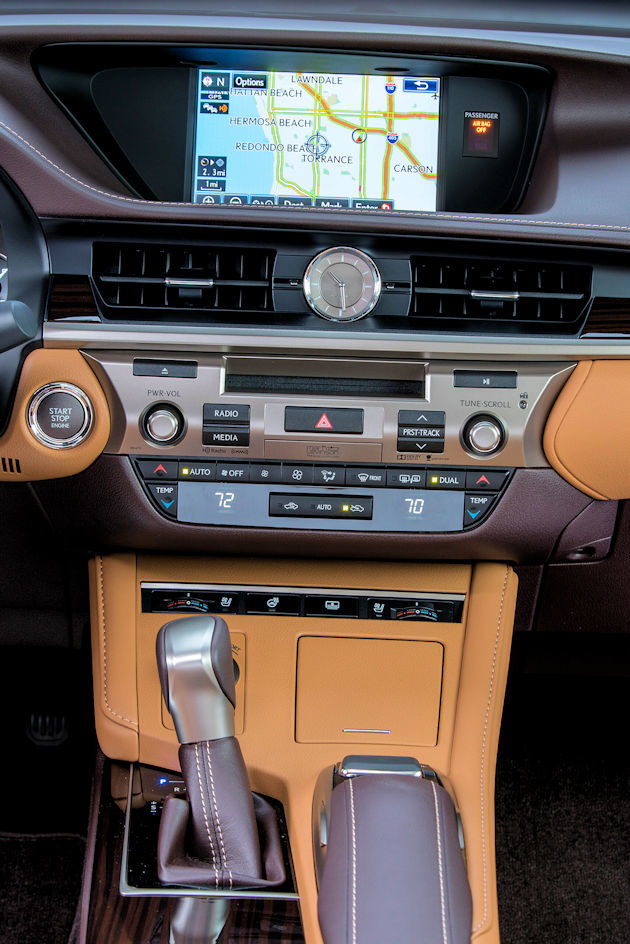 The high-resolution eight-inch screen that comes with the optional navigation system fits under an awning-like swoosh across the center of the dash so it?s sheltered from glare. The screen is also not a touch screen, so there?s no messy-looking finger prints all over it. The Lexus screen is activated by mouse-like control mounted just to the right of the shifter on the center console. Simply move the control just like on a home computer and the cursor goes where you want to go. Touch one of the buttons on either side of the mouse and the screen reacts quickly. We like that menus are shallow and don?t require a multitude of clicks to get to the right control. 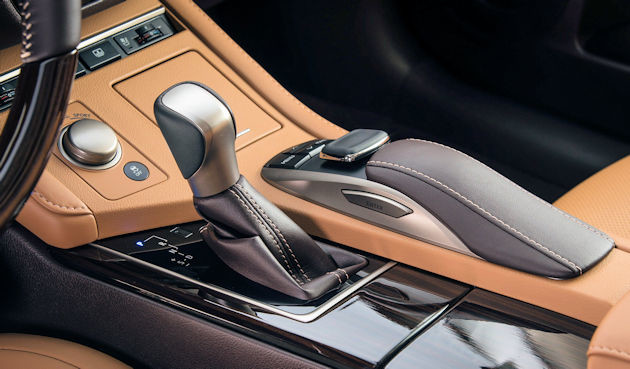 This same system works the standard Lexus Enform Connect system which includes Safety Connect emergency services, Remote (out of car functions like locking and locating while away from the car), navigation aids, a suite of apps and a Service Connect to check vehicle status and maintenance needs.
A 268-hp 3.5-liter V-6 engine powers the front-wheel drive ES 350 through a six-speed electronically controlled transmission. The transmission offers drivers, who insist on better control a gated shift linkage. The ES 350 doesn?t have the acceleration produced by some of the other Lexus models but does have a very respectable 7.1-second 0 to 60 mph acceleration time and a top speed limited to 130 mph. The EPA lists fuel economy at 21 mpg city, 31 mpg highway and 24 mpg combined. We averaged 25.7 mpg after a great deal of stop and go driving. 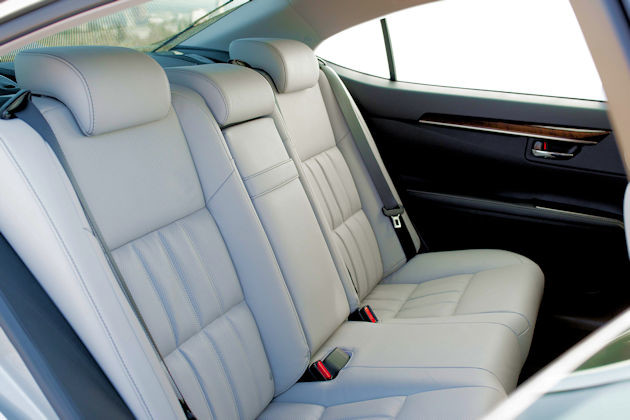 Leaving airport parking, we pulled onto California Highway 17, after a mandatory stop at In-n-Out Burger, and headed south toward Santa Cruz. This infamous stretch of road snakes over the Santa Cruz Mountains from Los Gatos to Santa Cruz. With two narrow lanes each direction, abundant curves, dozens of blind side roads and fast moving traffic, Hwy 17 is an excellent test road for handling and brakes, and the ES 350 passed both. The four-wheel independent suspension doesn?t lean on the sweeping curves, the steering accurately jogs around slow moving traffic and the brakes stop quickly when another car unexpectedly juts out. 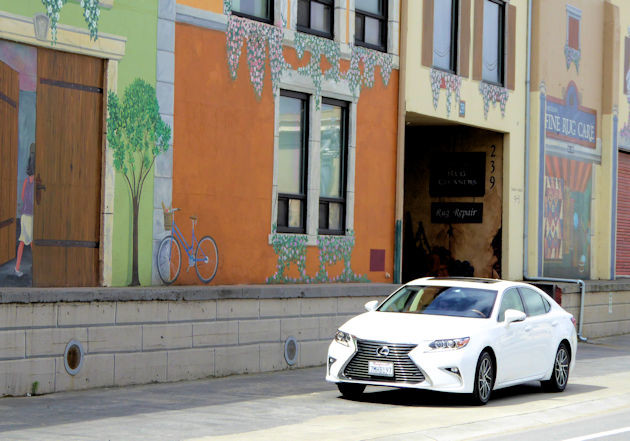 As Hwy 1 ended and we transitioned onto Highway 1, traffic came to a near standstill and the next five miles took one hour, but demonstrated how comfortable the seats were as we listened to XMSirius channel 71 Seriously Sinatra and played start and stop with the cars around us.

The 2016 Lexus ES is available in two models the ES 350 which we tested and the EX 300h, a hybrid version powered by a 2.5-liter four-cylinder gasoline engine and the Lexus Hybrid Drive system. The ES 350 pricing starts at $38,940, including the destination charge, while the Hybrid is only $2,920 more and has an EPA combined fuel economy rating of 40 mpg. Our test vehicle had most of the available packages and a bottom line price of $46,679, including the destination charge. 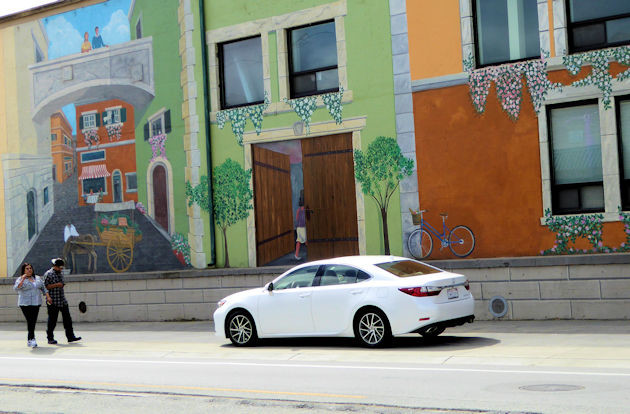 The 2016 Lexus ES is loaded with all of the features we like in a car like radar cruise control, blind spot monitoring, navigation, heated and cooled seats, heated steering wheel, rain sensor wipers and a full load of other safety and convenience equipment. In addition, we give the Lexus high marks for quiet, comfort and looks.

We think the 2016 ES is 100 percent Lexus and an excellent choice for someone who wants all the luxuries, comfort and opulence without having to break the bank.

**Bill went to the Western Automotive Journalist (WAJ) Media Days
This annual event held by WAJ is a chance for automotive journalists to drive a large number of vehicles back- to-back over a two-day period. The first day was based out of the Land Rover Driving School at the Quail Lodge in Carmel Valley with the journalists driving cars on one of two highway loops. There were 78 vehicles available including everything from the Cadillac CTS-V to Mazda3 to Mercedes C63 AMG to Fiat 500 Abarth to Dodge Viper — a total of 78 vehicles.

Also on day one, the Land Rover Driving School, offered WAJ the use of their off-road course for 20 different SUVs and trucks. The school has a variety of steep challenging and often muddy trails through the neighboring Oak forest. The off-road vehicles included Land Rovers, Ram trucks, a Lexus LX 570, Subaru XV Crosstrek and many others.

Day two is the main reason the 50 automotive journalists come to Media Days. It included a chance to drive about 20 vehicles on the famous Mazda Laguna Seca Racetrack. After an orientation and check ride with one of the Hooked on Driving instructors the journalists could select a car and drive 2.8 laps of the famous 2.2-mile long road course.

A few cars were not available for the journalists to drive on the track, but the manufacturers had professional drivers giving hot lap rides in these cars, and that?s like an A-ticket ride at an amusement park only much faster. These cars included Acura NSX (not yet for sale), a 700-hp Corvette Z07 and the Mazda Laguna Seca record holding production car, a 645-hp Viper ACR driven by the actual record holder, Randy Pobst.

I drove 12 different cars including the Mercedes-Benz GTS, Cadillac ATS-V, Chevrolet SS, and rode with friends in four or five others. What a day! 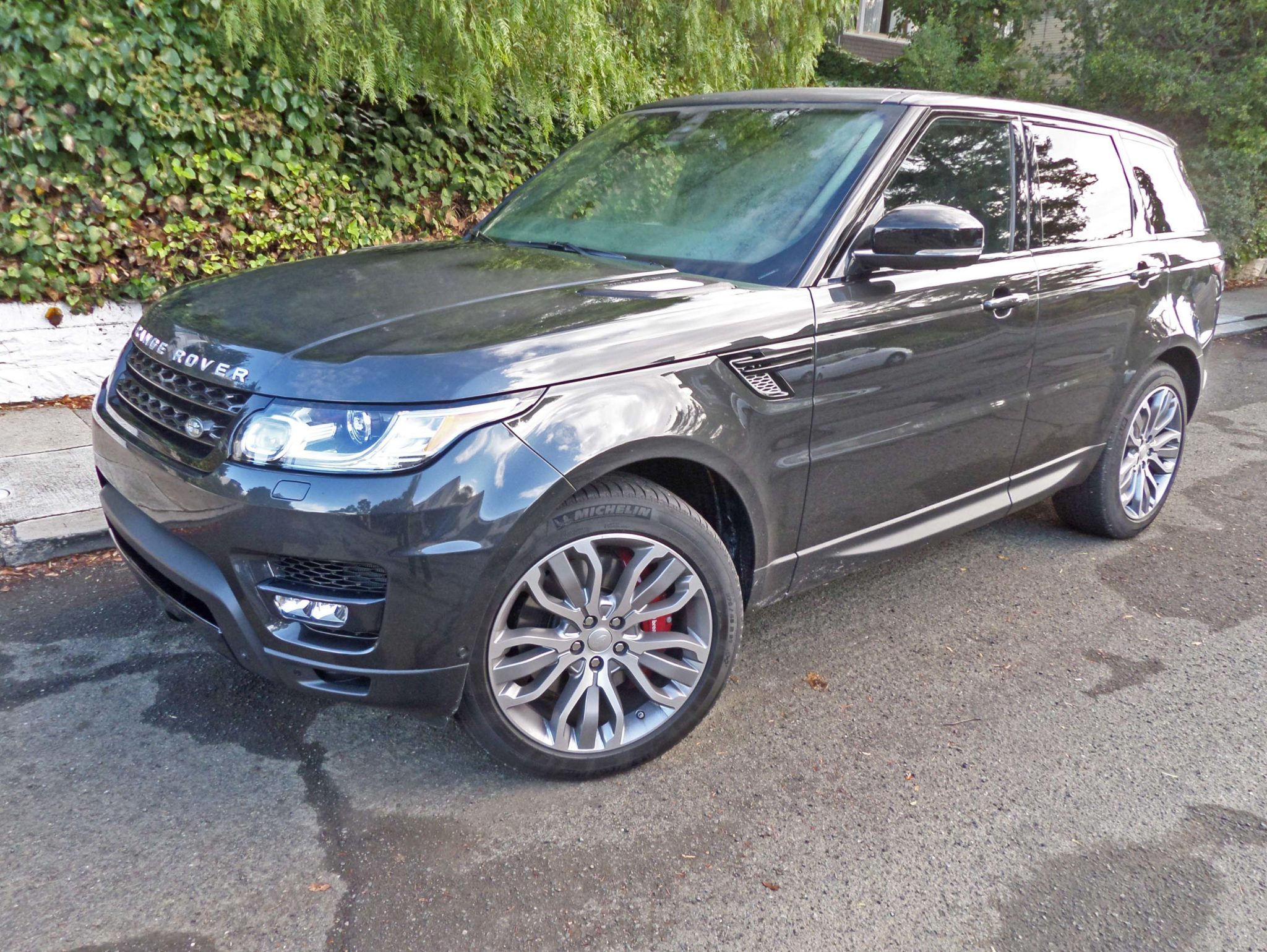 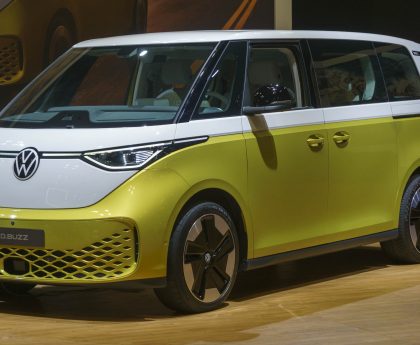